Other localities in the region are set to go forward with the guidelines for reopening some businesses and relaxing certain restrictions, but an 11th-hour order by Gov. Ralph Northam granting Richmond’s request to delay the phase in the city means restrictions there will remain unchanged for two more weeks.

Richmond Mayor Levar Stoney had requested the delay earlier in the week, just as Northam was announcing comparable delays for some localities in Northern Virginia with higher positive test rates and hospitalizations. Stoney cited similar circumstances in Richmond in his request, which Northam granted late Thursday along with a similar delay for Accomack County. 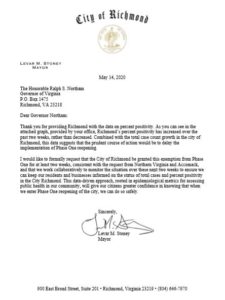 Just hours before the phase was set to start across the state, conflicting communications from Stoney and the top administrators of Richmond’s surrounding counties revealed a divide in how the localities wanted to proceed.

In a press conference Thursday afternoon, Stoney announced that the city would not proceed with the phase one opening until the state can provide data showing a decrease in percent of positive cases of COVID-19, the disease caused by the novel coronavirus.

The same day, the top administrators for Chesterfield, Hanover and Henrico counties sent a joint letter to the governor expressing their intention to go forward with the reopening despite the city’s position, which the officials – Chesterfield Administrator Joe Casey, Hanover Administrator Rhu Harris and Henrico Manager John Vithoulkas – acknowledged and said they respect.

“Our business community is vulnerable and for those businesses that were deemed essential from a retail perspective to those operating in office environments, great strides have been made by them to have safety standards above even state guidelines and executive orders,” the May 14 letter read.

In his briefing later that day, Stoney said it is the city’s primarily black and brown populations that are most vulnerable, citing statistics that the virus is affecting those communities across the country at a disproportionate rate, and that 16 of the 18 coronavirus fatalities reported in the city so far have been black residents.

He said the city health district had reported 611 cases in the city, including 12 positive cases among the city’s workforce. Stoney also said data he’d requested from the state earlier in the week and received that day showed an increasing trend of percent of positivity cases in Richmond in the past two weeks.

As a result, Stoney said, “I cannot justify risking the health and safety of the residents of the great city of Richmond by moving forward with phase one. I just cannot do that, because of the data that we have access to today.”

Earlier in his remarks, Stoney said Richmond “is blacker and browner in demographics than most Virginia localities, and COVID-19 has had a disproportionate impact on these communities. Unfortunately that impact has been deadly in some aspects.”

Asked about the letter from the counties, which he said he had seen, Stoney said he respected his colleagues’ decision. 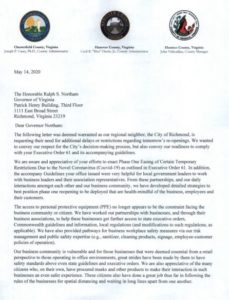 The counties’ letter to Gov. Northam. Click to view.

In their letter, the administrators said their counties had developed “detailed strategies to best position phase one reopening to be deployed that are health-mindful of the business, employees and their customers.” They also said access to personal protective equipment “no longer appears to be the constraint facing the business community or citizens.”

The letter concluded: “…we stand together as regional partners, who value the professionalism of our businesses in providing for a safe workplace. We are also aware that future data you review, may yield further reopenings or lifting of other temporary restrictions, but also aware that such data may also require adjustments to constrain their scope of operation. Either way, we are here to serve the public and represent your Commonwealth well during this pandemic.”

Under the phase one guidelines, restaurants and bars that already have the appropriate permits can provide outdoor dining at 50 percent capacity; salons and barbershops can open; gyms and fitness centers can provide outdoor classes; and churches can convene outdoor services at one-half capacity, among other guidelines. Public gatherings remain limited to 10 people, and telecommuting and wearing of face masks are still encouraged.

Northam has said he anticipates phase one to last about two weeks, after which phase two would be implemented as health metrics allow. Guidelines for phase two include allowing indoor restaurant dining at 50 percent capacity.

In his remarks Thursday, Stoney said he had a message for the city’s business community, which now will have to wait two weeks longer than the rest of the region to start reopening.

“I want them to know that their government stands with them,” Stoney said. “We understand and feel what you’re going through, what you have gone through over the last eight weeks, and we ask that you be patient. Not just with your government, but also with all levels of government – federal, state, local – to ensure the safety for the entire community.”

Racist! Definition: noun. a person who believes in racism, the doctrine that one’s own racial group is superior or that a particular racial group is inferior to the others. Stoney is literally being Racist.

News flash to Stoney: If the order ALLOWS you to reopen, it doesn’t mean that you or any of your citizens MUST reopen. Having the choice is called Liberty. One should always remember that if one is given “the power” to control others, that power can be used AGAINST them when they leave office.