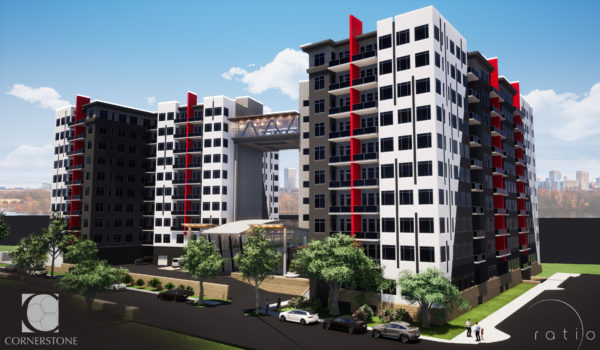 A vote from the city’s Planning Commission on Monday helped pave the way for one major residential project along the riverfront in Manchester, while possibly setting the stage for more mixed-use development nearby.

The commission recommended approval for a special use permit for River’s Edge II, a twin-tower residential project at 310 W. Sixth St. that would house about 350 apartment units.

River’s Edge II’s special use permit is now set to be heard at City Council’s June 8 meeting, where it’s on the consent agenda.

The commission also voted to recommend rezoning of 400, 401 and 418 Maury St. to TOD-1, or transit-oriented nodal district. The zoning designation was created a few years ago to encourage development of up to 12 stories along the Broad Street Pulse corridor.

The Maury Street parcels are owned by an entity tied to Ashland’s Christian E. Shield. Shield is represented in the rezoning case by Hirschler’s Jeffrey Geiger, who was not available for comment by press time.

In the rezoning application, Geiger writes that the parcels, totaling about 4 acres, are “vacant, underutilized, and ripe for development as high-density mixed use,” and that the end of Maury Street could be a gateway neighborhood to the city from Interstate 95.

“The rezoning of this property will serve as a catalyst for mixed-use, dense, walkable development that will lead to the transformation of this area into a neighborhood with active streets lined with craft restaurants, craft breweries, office, retail, cultural, and multi-family residential uses,” Geiger writes.

As of press time, no plans of development for the Maury Street parcels had been filed with the city.

The matter is also set to be heard at City Council’s June 8 meeting, where it’s on the consent agenda.