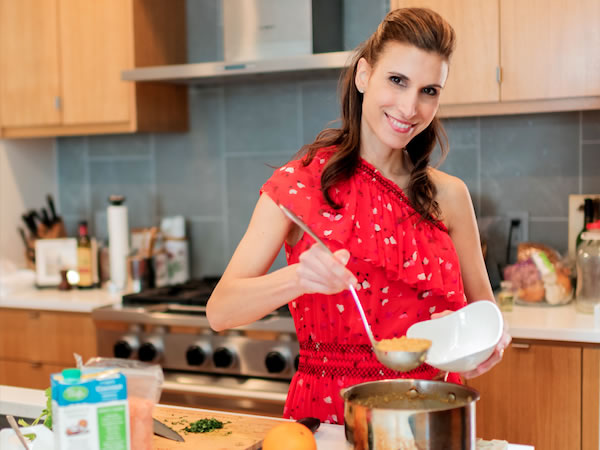 Undeterred by the coronavirus pandemic, two locally based food brands are expanding their product lines.

O’My Dairy Free Gelato recently rolled out a line of lower-sugar products in a bid to expand its customer base. And Kim Baker Foods, a health food company, is eyeing a June release for a new lentil-based snack.

While grocery stores have enjoyed brisk business during the pandemic, O’My and Kim Baker say their efforts come about in a climate that can be less friendly to new, lesser-known food brands. 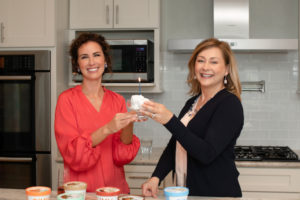 O’My’s expansion into lower-sugar products was powered by a $750,000 capital raise that closed in February.

The creation of a lower-sugar line allows the brand to introduce itself to diabetic and pre-diabetic customers thanks to the use of allulose, a sugar substitute. The company’s other products use cane sugar.

“We were leaving out a huge part of the population by not thinking about low-sugar products,” said Allison Monette, O’My co-founder and CEO.

The low-sugar offerings, which come in chocolate and cake batter flavors, hit shelves in local grocers such as Libbie Market and Ellwood Thompson’s in March. The flavors are also available in Sprouts Farmers Markets, and 100 Giant and Martin’s supermarkets. By mid-June, the new flavors are expected to be in all Wegmans Food Markets locations.

Monette, who has a background in the consumer packaged goods industry, and Julie Bishop, formerly of Ukrop’s Homestyle Foods, founded the Richmond-based company in 2018. 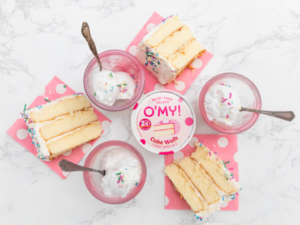 The company has its products on the shelves of 1,500 stores in 48 states, excluding South Dakota and Alaska.

Grocery stores are one of the few industries to get a boost due to the coronavirus. While Monette said the times aren’t favorable for new food brands in general, being in a familiar category such as ice cream has helped O’My pull through the pandemic.

“You can’t say (sales have increased) universally. A lot of new brands are going to struggle to get on shelves,” she said. “I do feel optimistic yet incredibly cautious still. We’re growing significantly and feel good about our partners, but we continue to see supply-chain challenges.”

Though it’s been largely left out of the buying bonanza in grocery stores, Kim Baker Foods has relied on other sales avenues and is moving forward with plans to launch a new product in June.

The company is expanding its Pro-Chi line, three lentil-based products intended for cooking and as a salad topping. The new addition is a more snack-friendly take on the concept, featuring a cluster form with a tahini flavor. 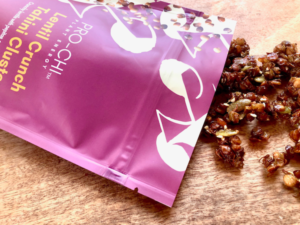 Kim Baker Foods has added to its line of lentil-based products with a product intended for snacking. The new snack is expected to launch in June. Photo courtesy Kim Baker.

Founder Kim Baker launched the company with the publication of a cookbook in 2014. Pro-Chi followed last year. The company is based at Hatch Kitchen RVA, a food-and-beverage business accelerator in Manchester. Baker is a chef who’s catered her products to home cooks.

The pandemic provided some breathing room to invest in research and development to create the new product, which was prompted by customer feedback.

“(Customers would say) ‘I’d like to be able to have a late-night snack that isn’t chips,’” Baker said. “I’m learning what they’re looking for.”

Baker sells Pro-Chi in Richmond-area stores such as Whole Foods, Libbie Market and Ellwood Thompson’s. The company produced about 1,000 pounds of lentils last year and plans to scale up to 5,000 pounds this year.

And while she plans to pitch the new product to wholesale accounts, she’s unsure what the reception will be given the pandemic.

Baker said her grocery store sales have been down from the same period last year, speculating that the times are more conducive to stocking up on familiar standbys than exploring new brands. With that in mind, Baker plans to focus sales efforts through her company’s website.

Though grocery store sales have been a letdown recently, Pro-Chi sales are up 25 percent through local meal delivery service Kate Uncorked, a partnership that existed prior to the pandemic. Kate Uncorked buys Pro-Chi to use in its meals.

“I’m still riding things out. They don’t offset each other … but it creates a little glimpse of opportunity,” she said. “It points to the value of diverse sales channels.”

Baker also launched the Pro-Chi Cooking Club this spring. The free virtual cooking club is intended to help people hunker down at home to explore cooking. While not a money maker itself, the club does provide an avenue to introduce customers to Pro-Chi.