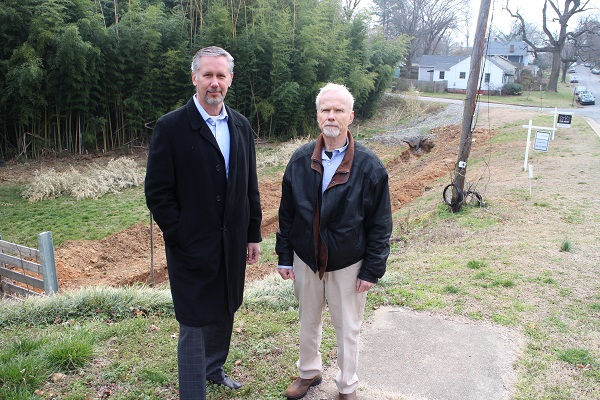 With the final nail hammered on the last of four new homes they developed around the oldest house in Byrd Park, a local residential development duo is turning their attention to their next infill project on the other side of the river.

Ben Partridge and J. Mark Slack have started work on two new houses they’re situating on a triangular-shaped lot at the northeast corner of West 28th Street and Stonewall Avenue in Woodland Heights.

The project’s getting going just as Partridge, an agent with One South Realty Group, and Slack, a managing member with Kanawha Realty Advisors, are wrapping up Carillon Place, a cluster of four new homes on the subdivided lot of the 1889 Marburg House near the Carillon.

Three of those houses sold over the years since Partridge and Slack, operating as Castle Kanawha 1508 LLC, started Carillon Place in 2015. One of those sold for $961,000, while another topped $1 million, Partridge said. 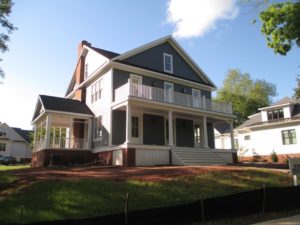 Carillon Place wrapped up with the completion of the house at 3028 Rugby Road, listed at $1.31 million. (Jonathan Spiers)

With that project finished up, Partridge and Slack, who have collaborated on about 20 homes and infill projects in the past decade, said they were looking for their next opportunity when they were alerted to the Woodland Heights site by fellow One South agents Ann Schweitzer Riley and Madeleine Alderman, the latter now with Divaris Real Estate.

“We own some other properties over here, so we’re familiar with this area,” said Partridge, who with Slack purchased the 0.3-acre site in 2018 through their LLC. They paid $100,000 for the site, which the latest city assessment valued at $110,000. 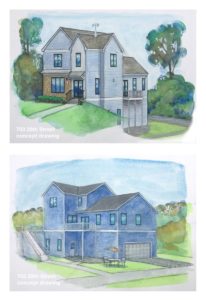 The three-level houses are being built around the site’s sloped topography, appearing as two-level houses facing 28th Street with a lower level with a two-car garage continuing down the hillside. Slack said the topography posed a design challenge for the homes, which were designed by Charlie Shade with C.L. Shade Drafting, and are being built by Guy Butcher with Pro Built Construction.

“We certainly want it to blend in the neighborhood. We’re also seeing signs of more contemporary architecture as well, so trying to marry the two was a goal,” Slack said. “Having the site configuration, we needed to get creative in terms of what the footprint of the house was going to be in order to have it fit properly on each lot.”

Slack added that an existing curb cut allowed for the layout to include off-street parking. The smaller house will have an optional two-car garage, and both homes will include decks overlooking a wooded area behind them.

The 701 house is beginning construction, and Partridge said they’ve received interest on 703 from several prospective buyers, with construction to start once a deal is done. He and Slack said they expect the site’s proximity to the James River Park System and Manchester to be selling points. 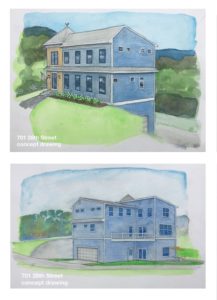 Partridge and Slack said they have their eyes on other properties in the area that could be their next projects. As for Carillon Place, they attributed the project’s duration to city zoning and permitting delays, as well as their own reconfiguration in response to neighborhood concerns to preserve the 19th-century house, which originally was planned for demolition.

While the project took longer than they expected, Partridge said they have been pleased with how the homes there have performed in the market.

“The pricing has exceeded our expectations,” he said.

Correction: The 701 W. 28th St. house remained for sale as of publication. The house had been under contract as initially reported, but Partridge said that deal fell through.

Poor Marburg. It looks so good in the middle of that heinous pool of homes.

Congrats guys, way to hang in there!