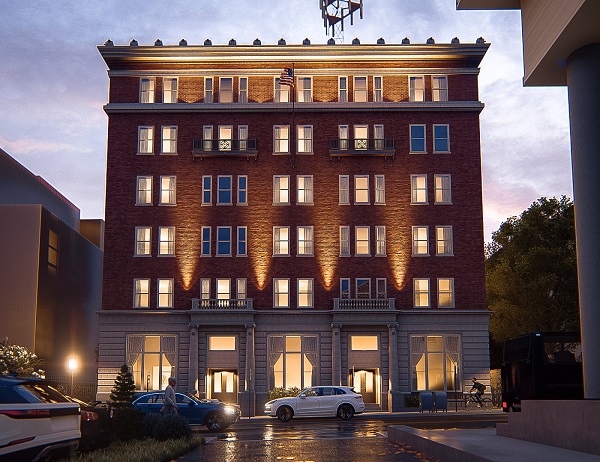 The hotel as it would appear from the outside. (Photos and renderings all courtesy Retro Hospitality)

After getting several glances from developers over the years, a century-old hotel building in the heart of Old Towne Petersburg now appears to be on track for a modern-day revival.

A development team led by Petersburg native Nat Cuthbert is working to reopen the doors of the old Hotel Petersburg, a seven-story building at 20 W. Tabb St. that last operated as a hotel in 1969. 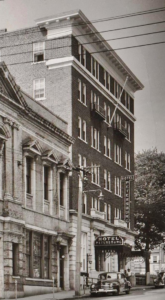 Hotel Petersburg in its heyday.

The building, which dates back to 1915, would be revamped as a 68-room hotel with a restaurant, bar, 48-seat banquet room, street-facing storefronts, a courtyard with outdoor dining and potentially a rooftop sky lounge. The project cost is estimated at upwards of $13 million.

Cuthbert, a radiologist who with his brother Charlie converted the former Union Trust Building at 200 N. Sycamore St. into the 42-unit Courthouse View Apartments, purchased the Hotel Petersburg building in late 2017 for $500,000.

He said he did so after interest from other developers over the years, primarily for apartments, never materialized, and he wanted to return the building to its hotel roots.

“I was tired of seeing it sit there and deteriorate further when I thought it had a lot of potential,” he said. “I wanted to see something happen.”

Earlier that year, Richmond-based Monument Cos. had bought the building for $800,000 from the City of Petersburg, which had used parts of it as overflow office space since acquiring it in 1975, according to reports from the Progress-Index. Monument had envisioned converting the building into about 60 apartments, but those plans didn’t go forward. The Progress-Index also first reported Cuthbert’s project. 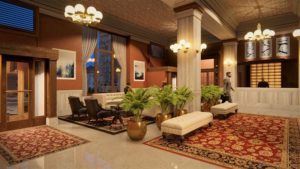 A rendering of the hotel lobby.

Cuthbert said he’d always admired the building, which was designed by Charles Robinson, a noted architect whose work in Richmond includes the former Highland Park School, Fox Elementary and the First English Lutheran Church on Stuart Circle. As a sixth-grader, Cuthbert said he was kicked out of the hotel while trying to retrieve bottle caps from a soda machine cap catcher.

“It was a neat place, but it was clearly down and out,” Cuthbert said of the hotel in its final years. “It’s got a lot of neat features inside that still exist.” 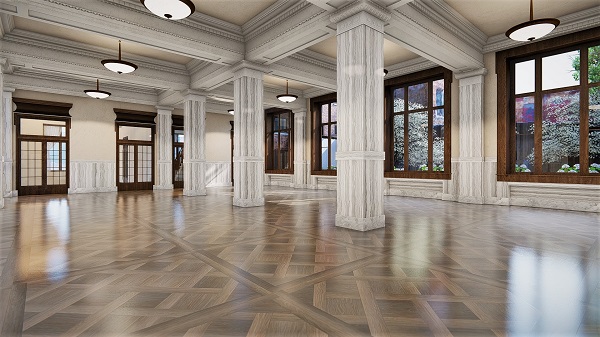 A rendering of the restored banquet room with its marble columns.

Those features include the building’s cornice and iron-and-glass marquees that Cuthbert’s team plan to restore, as well as marble columns, wainscoting and ornamental plaster work on the ground floor’s 15-foot-high ceilings.

Cuthbert said he has put his own money into getting the project going with pre-construction remediation work, plaster and paint repair, and window replacements. He wouldn’t say how much he’s put in so far, describing the amount as “substantial.” 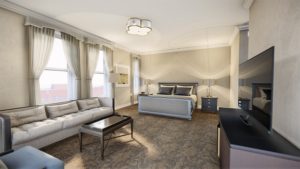 “While it was kind of risky to keep pouring money and doing those things, I’m betting that it will all come together and that we’ll be glad we have those tasks out of the way,” Cuthbert said.

Berkadia is providing additional financing for the project, which also would involve state and federal historic rehab tax credits. Cuthbert’s team is in the process of working with the city to apply for a loan through Virginia Tourism Corp.’s gap financing program to fill a remaining hole in his budget.

“Between developer equity, primary lender, and the proceeds from the federal and state tax credits, there’s still a gap between what that adds up to and the total budget,” Cuthbert said, adding that he hopes to have the gap filled in the next six months so he can meet his completion goal of December 2022, after which federal tax credits are slated to change.

“If I can’t complete it by then, then the federal credits won’t be worth quite as much. But even more importantly, it will create more financing difficulty because the credits would be collected over a four-year period instead of in one fell swoop at once,” Cuthbert said.

Cuthbert is working with consultant Jeff Sadler of Complete Community Economies on the tax credits, and with Paige Pollard with Commonwealth Preservation Group on the credit applications.

He’s also working with Costa Canavos with Berkadia, Joanne Williams with PR firm Williams Media and Paul Cooper with Richmond-based Retro Hospitality, which provides third-party consulting to six Virginia hotels, including the Blackburn Inn in Staunton, and the Quirk Hotel in Richmond and Charlottesville.

Cooper said a higher-end hotel is needed in Petersburg, where he said travelers and visitors typically opt for lodging along the interstate or in neighboring Colonial Heights and Hopewell. He said the project would create more than 80 full-time jobs and additional tax revenue for Petersburg. 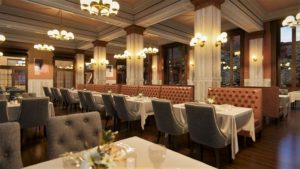 “Visitors who are coming to the Petersburg metro area to shop, to dine, to hopefully stay with us, there’ll be significant additional spend that will be generated by just having a premier hotel in that market,” he said.

Cooper said stabilized room rates on an annualized basis would be set above $150 per night. Cuthbert added that a market demand study they commissioned showed the project is viable.

“There really aren’t any hotels that leisure travelers with disposable income would want to stay in,” Cuthbert said. “I think that this hotel would satisfy a big need and would really be great for all parties involved.”

Cuthbert has yet to select a contractor for the project, which is being designed by Richmond-based Baxter Bailey & Associates. Architect Baxter Bailey, who worked with Cuthbert on a restoration of his 19th-century residence, said the hotel project presents some challenges, such as a tight site to work with, limited-size original elevators and what he described as repairable cosmetic damage.

“It’s pretty tightly landlocked, and it suffered some from poor maintenance,” Bailey said. “The most damage that we have is from water infiltration, poor roof drains, things like that, all of which can be corrected because it has such good bones. It is a good, solid building that shows literally very little stress at all for the age that it is.”

Cuthbert’s project comes as another area hotel property planned for redevelopment appears to be in limbo.

A few blocks away, the long-dormant Ramada Inn building at 380 E. Washington St. has been planned for a hotel-anchored development that has yet to start. The developer and owner, C.A. Harrison Cos., recently said it’s working with the city’s economic development department on an announcement about the project that could be made later this year.