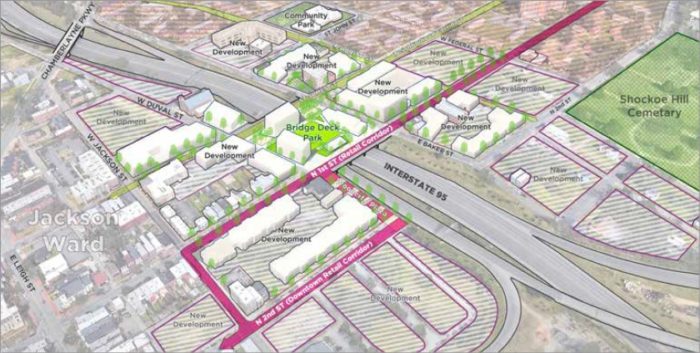 A rendering of the Jackson Ward bridge deck over the interstate recommended in the Richmond 300 plan.

With development activity picking up on both sides of the freeway that 80 years ago cut the Jackson Ward area in half, Richmond planners are floating an idea to reconnect the historically Black neighborhood as part of the city’s proposed master plan.

Richmond 300, the draft update to the city’s master land-use plan that city planners and consultants have been rolling out in recent weeks, includes several strategies for improving road and pedestrian connections throughout town. Among them is a proposal to cap Interstate 64-95 with a bridge deck spanning the width of First and St. James streets, creating a platform the size of a city block that could be filled with a park, buildings, and new roads and walkways.

The concept would be similar to Richmond’s Kanawha Plaza, which was built above the Downtown Expressway, forming part of the tunnel that also runs under the parking deck of the Williams Mullen tower between Ninth and 10th streets. It’s also reminiscent of the BridgePark project proposed for the Ninth Street-Manchester Bridge.

The plan also recommends further capping of the expressway in the area between Second and Seventh streets. Along with the Jackson Ward bridge deck, those two projects are emphasized among bridge additions and improvements that could work toward an objective of re-establishing connections between disconnected areas.

Such reconnections are one of six “Big moves” that the plan recommends the city take in the next five years to set Richmond up for meeting other goals in the 20-year plan, tied to the city’s tricentennial in 2037.

The occasion marking Richmond’s 300th year also would mark 80 years since the completion, in 1957, of what is now I-64-95 through Jackson Ward. It cut a swath through the heart of the neighborhood, dividing Jackson Ward physically and destroying parts of what had become an epicenter of Black culture and commerce in Richmond, known along the East Coast as “Black Wall Street.”

By 2037, the Richmond 300 plan envisions Jackson Ward better connected to the rest of downtown through several strategies, including conversions of existing one-way streets to two-way, and the proposed bridge deck that would build off the existing bridge that carries First Street across the interstate.

‘Knitting the neighborhood back together’ 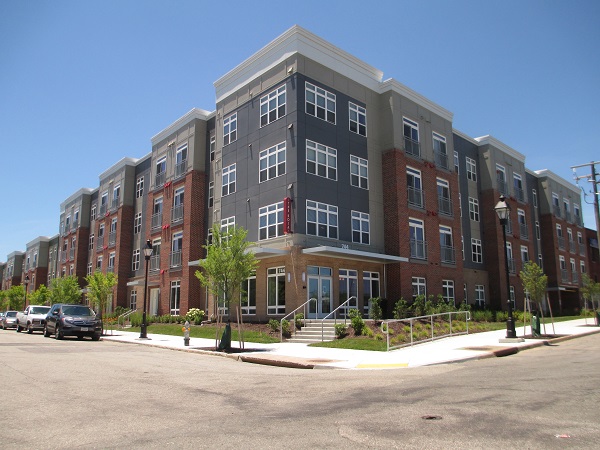 In the first of several summits highlighting priority growth areas mapped out in the plan – that initial summit focusing on the Scott’s Addition area – city planning director Mark Olinger described such reconnections as particularly fascinating for Jackson Ward in light of its history.

Noting barriers created by the river, and by highways and interchanges, throughout town, Olinger said a question to be answered is, “How do we overcome those barriers and begin to knit the fabric of the city back together?”

Referring to the Jackson Ward proposal specifically, he said, “How do we begin thinking about knitting that neighborhood back together when there’s stuff happening on both sides of the interstate?”

In recent years, development activity has indeed picked up in the area, with infill projects on the south side, including the large-scale Jackson Place and the nearby Penny apartments, as well as rehabs to existing buildings that have yielded more apartments.

Across the interstate, an apartment conversion of the historic St. Luke Building recently wrapped up, with the developer eyeing adjacent land for new buildings that would house dozens more apartments. And nearby, a long-planned rehab of the former Baker School building began earlier this year. 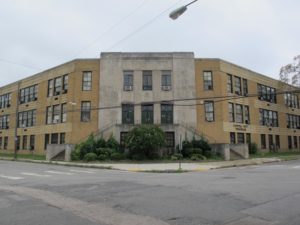 The Baker School building as it appears today. (Enterprise/RenderSphere)

Those buildings line the interstate on the northern side that’s largely defined by Gilpin Court, the first public housing project built in Richmond. Constructed in 1943, it preceded the interstate that ultimately isolated the complex from the rest of Jackson Ward, and resulted in the loss of over 900 buildings, according to histories included in the Richmond 300 plan.

Jackson Place and Baker School are part of a trio of projects aimed at relocating residents of the nearby Fay Towers, which the Richmond Redevelopment & Housing Authority is eyeing for redevelopment. The projects are part of a longer-term goal of transforming Gilpin Court into a mixed-use, mixed-income community – something the Richmond 300 plan also recommends.

Today, approximately 29 acres on both sides of the interstate remain vacant or underdeveloped, according to the plan, representing about one-third of Jackson Ward’s total land area.

A rendering of the completed Baker School project. (Enterprise/RenderSphere)

The draft Richmond 300 plan is available for review on the plan’s website. Public comment on the plan is being accepted through July 13.

I can only think of how many buildings on the north side of 95 could be rehabbed with the money it would take to create this bridge. Couldn’t the 1st and 5th street entrances be made to look more inviting?

UVA faced the same question when it was planning the South Lawn campus development. They chose a similar approach to build a plaza over Jefferson Park Avenue and it created that seamless connection between the two campuses. JPA is no I-95 by any means but the same issue prevails. The city will never be able to un-do the damage created by the construction of the expressway until it provides a seamless means to reconnect them. It’ll come at great expense no doubt.

The City’s proper role is to create the public infrastructure and other circumstances necessary to catalyze private investment in buildings/ neighborhoods. With the exception of a few publicly-owned buildings (e.g. City Hall), the City should not be directly involved in rehabbing buildings.

Does Richmond 300 ever provide cost estimates for anything?

Exciting for our community. Looking forward to seeing and hearing more.