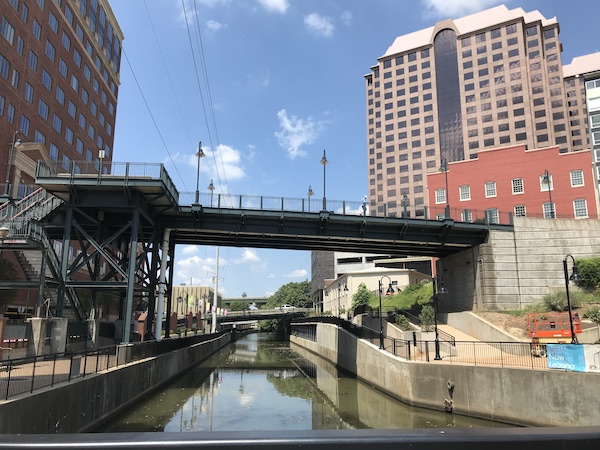 View of the canal looking west. The city purchased about 0.1 acre of land on the north band, pictured right, for $1.8 million. (Photos by Mike Platania)

The city has secured a newly completed extension of the Canal Walk, a project that was completed and paid for initially by the developers of The Locks.

Last month the City of Richmond paid $1.8 million for about 0.09 acres at 390 S. 11th St., as well as improvements to the land, including the sidewalk, planters, fencing, lights and irrigation system.

The city’s purchase extends the Riverfront Canal Walk a block from 10th Street to 11th Street. 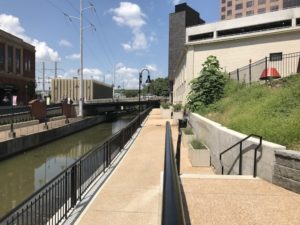 WVS built out the Canal Walk extension to include planters, stairs, ramps and more prior to selling it to the city.

The seller in the deal was a partnership between WVS Cos. and Tom Papa, the developers of The Locks, the multiphase project that has rehabilitated the former Reynolds Metals complex along the canal.

The extension and improvements were done as part of the overall construction of The Locks tower, an adjacent, 12-story mixed-use building nearing completion.

“It was a project the city wanted to do and we helped them with that,” said Richard Souter of WVS. “They bought a finished project.”

The deal was recorded with the city on June 20, but has been more than a year in the making. City Council approved an ordinance in April 2019 to authorize the purchase of the land.

The Locks kicked off nearly a decade ago as a phased redevelopment of five buildings near the canal. To date, it’s brought nearly 500 apartments to market and houses Casa del Barco restaurant. The Locks tower is the penultimate project for The Locks, as WVS is planning a final phase on the canal’s south side. 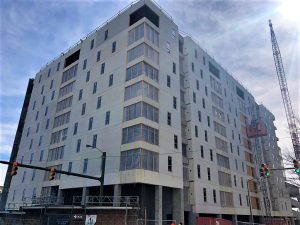 The Locks Tower recently signed on C&F Bank as its first commercial tenant, and Souter said they’re now leasing and moving tenants into the apartments.

With work entering the home stretch at The Locks, WVS is looking to get another waterfront project off the ground.

In March WVS filed plans for a six-story mixed-use building with over 200 apartments at 4401 E. Main St. in Rocketts Landing, and Souter said they’re looking to begin work on the project by the end of 2020. WVS and Papa are also working on South Falls, a residential and office project in Manchester near the Southern States silos, which themselves are being eyed for redevelopment by Hourigan.

The city has a budget for expenditures and this purchase was part of it and if you explore that area a lot of infrastructure work was completed to connect that area for pedestrian traffic, which is in line with the master plan. I fully support our schools and they need a lot of money. Unfortunately, $1.8M does not accomplish much in terms of school facilities. As for the statues being removed they aren’t part of this article.

Mr. Reynolds, Our City has been reckless to say the least with their spending and their leadership. This is just another example. Whether it was in the budget or not 10 years ago is not the problem here. The problem is that we just spent $1.8M for a piece of land which we did not need. Yes, $1.8M is not enough to “fix” the schools but it could certainly put a big dent in it and help our teachers out. As far as the statues, it is not a part of this article, however, it is a part of the… Read more »

You’re not acknowledging how budgets work, Debbie, and the statues aren’t part of this article—discuss them elsewhere. The school system needs funds to the tune of hundreds of millions of dollars, which means a few million dollars won’t help. The problem with the city schools is much larger than just Richmond and it’s in need of a federal solution for supporting low income neighborhoods across the country. What Richmond can do is incrementally invest money around various projects to make sure we all see some of the benefit. That’s why two new schools are under construction now, it’s why we… Read more »

What an ignorant, uninformed comment, Debbie. As Justin said, the City has a budget for acquisitions of this type. In this instance, the purchase was also funded through State funds of more than $766k, which means that––I’ll do the math for you––the City spent $1,034,000 to acquire a completed project, without the hassle of City-led development and construction.

Please make an effort to inform yourself before spewing non-sequitur complaints.

Howard Roark, Wow….what a nice way to start out a sentence. I guess, “spewing” my opinions if not in line with yours is ignorant of me. I apologize for my ignorance. Do you apologize for yours? Of course not, because you are one of those people who profess to always being on the right side and being opened minded but not allowing others their own opinions or thoughts if not in line with your thoughts or opinions. This is an open format for allowing the public to speak their opinions and concerns. Our City has been reckless to say the… Read more »

I agree with other comments that it does not make sense to throw up our arms every time the city spends money on something that is not the schools (or insert any other specific form of expenditure). Governments have large budgets covering many areas and they will spend money in all of them (if your view is gov’t should spend less money in general then that is part of a different and larger debate). Aside from that issue though, is more money to schools the answer after viewing statistics like the following(article is from 2018). Can the city explain why… Read more »