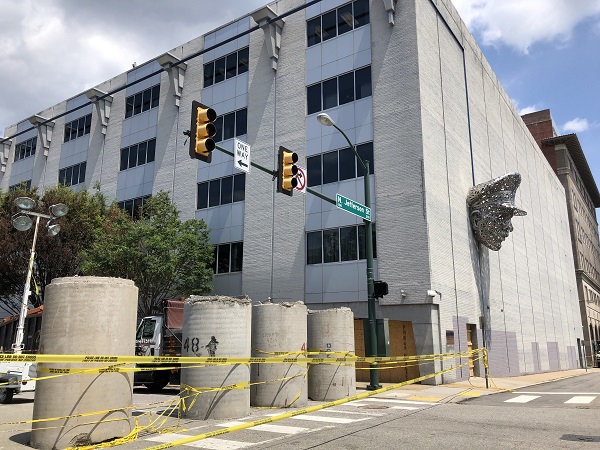 RPD’s headquarters Wednesday. Massive pieces of concrete pipe have been placed as bollards to block off the building’s entrance, as well as Grace Street. (Photos by Michael Schwartz)

Police response to the first month of protests and demonstrations in Richmond cost the city more than $1.6 million in overtime pay for officers.

Add to that damage to city-owned property from vandalism and violence that stemmed from the protests and clashes with police, and the total cost to the city – and in turn city taxpayers – exceeded $1.73 million since late May, according to numbers provided by the Richmond Police Department and the city finance department through a Freedom of Information Act request.

The numbers are for costs incurred since May 25, the day George Floyd was killed at the hands of Minneapolis police officers, and June 25, the date of BizSense’s FOIA request. The $1.6 million in overtime costs for RPD officers is from May 25 through the department’s pay period that ended July 3. The amount includes overtime for SWAT personnel.

The $1.6 million in overtime costs equates to 20 percent what RPD spent on operations monthly, on average, in fiscal year 2020, according to the city’s adopted budget for the 12-month period that ended June 30.

RPD did not provide a requested comparison to operational costs for the same period last year, or a distinction between regular operational costs and the additional costs attributable to the protest activity. The response from William Shipman, associate general counsel to the department, said no records were found for that particular request.

Shipman’s response also excluded a requested list of dates that RPD requested mutual aid from other law enforcement agencies and National Guard assistance. He cited a state statute that allows agencies to exclude records that contain specific tactical plans, the disclosure of which, the statute states, “would jeopardize the safety or security of law-enforcement personnel or the general public.”

The response did say that RPD did not incur any costs for requesting such aid.

City property damage sustained through June 25 included: $110,194 in damage to 39 city vehicles; $1,792 in workers’ compensation claims paid for injuries to two city employees; $18,186 for window replacement at the John Marshall Courts Building and the RPD headquarters building; and $3,077 in repairs to a parking meter pay station. 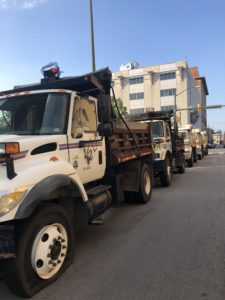 City dump trucks used to block off the area have been vandalized and damaged.

“It goes without saying that the nearly unprecedented civil unrest in recent weeks has had a substantial impact on emergency response and related expenditures,” Nolan said. “One factor that does not change, however, is our ongoing responsibility to ensure the public health and public safety of our residents, employees, business owners and visitors. The city spends, and will continue to spend, the resources necessary to do so.”

Richmond’s Economic Development Authority has said it will provide $500,000 in grants from the city’s CARE program to help downtown businesses that sustained damage from rioting. Also in the works is a $3 million grant program for businesses affected by the economic shutdown, using federal CARES Act dollars.

A GRTC Pulse bus was torched during a riot in the early morning May 30. While not a city department, GRTC deemed the bus a total loss and estimated the cost at $475,000, an agency spokesperson confirmed.

The adopted budget for FY21, which started July 1, reduces RPD’s budget per capita to $430, equating to a total department budget of roughly $99.35 million. RPD’s staff also is lower at 881.5 – 11 fewer employees budgeted.

The numbers are notable amid calls across the country to “defund” police departments, or otherwise reallocate funds to other public services, in the wake of the protests highlighting instances of police brutality against Black Americans. Richmond City Council adopted the FY21 budget May 11, two weeks before Floyd’s death.

RPD is one of 14 departments participating in a performance-based budgeting process introduced as part of the FY21 budget. The department’s portion of the budget highlights performance goals such as reducing the violent crime rate by 13 percent in FY20 and in calendar year 2021, and reducing the property crime rate by 9 percent in those same years.

The department budget states: “Through internal programs and external partnerships, community policing, and civic engagement, the department is constantly working to make the City of Richmond a safer place. This measure is tracked by the Richmond Police Department on a calendar year basis.” 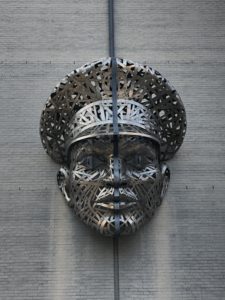 The sculpture of a police officer on the side of the RPD HQ.

In a press conference Wednesday addressing six shootings in seven hours in the city that resulted in two deaths, one of those a juvenile, Deputy Chief John O’Kleasky said homicides for the year are down 10 percent, violent crimes overall are down 22 percent, and victims shot are down 14 percent compared to last year. He said overall crime – including major, property and violent crimes – is down 10 percent.

Response to the protests has affected neighboring law enforcement agencies outside the city.

Henrico County Police responded to Richmond protests five times from May 29 to June 14, assigning a total of 200 personnel to the protests, according to its response to a FOIA request from BizSense. The total estimated personnel cost to the county was a little more than $69,000.

By June 14, the last time Henrico Police responded to city protests during the period for which records were requested, there were 27 personnel involved in the division’s response.

Damage to Henrico Police vehicles was minimal, estimated at $100.

BizSense has requested similar data from Chesterfield County. That request is still being processed.

Unacceptable. Valuable resources that could go to other services. I’m all for protesting and being civil. But going to Mayor Stoney’s apartment and last night to Kim Gray’s house is a step too far. Allowing a tent city basically at the Robert E. Lee monument is deplorable. I don’t agree with the mayor but this needs to stop. The pandemic alone is reason enough to shut them down at 11 or 12. We need real leadership NOW.

“First they came for the Jews
and I did not speak out
because I was not a Jew.

Then they came for the Communists
and I did not speak out
because I was not a Communist.

Then they came for me
and there was no one left
to speak out for me.”
Martin Niemöller

You said
“Allowing a tent city basically at the Robert E. Lee monument is deplorable.”

When the huge wave of evictions in Richmond hits in August,you’re REALLY going to dislike the ACTUAL tent cities.

What huge wave? That chicken little stuff is not working here. The governor is getting involved to help with relief. I was in the same situation 6 years ago. Laid off and no job for 2 full years, feeling worthless. No Corona and what help came my way? The world moved right on along. I had to move in with family and leave Richmond till I got myself together. With this pandemic, folks are getting relief, aid and unemployment assistance extended. Plus what heartless judge is going throw people out of the street because of this? NO ONE. Like I… Read more »

They could have listened and worked with the basic, and necessary, asks early on. They could have not attacked peaceful protestors with tear gas and rubber bullets. They could defund and reallocate funds, that would be proactive instead of reactive. Alas. Here we are. Wait to see how much thw lawsuits will cost as well. I’ve been seeing the many white supremacy empathizers commenting and voting on statues and racist business posts here. Many of whom were also pushing the Navy Hill disaster. Cute to use the Navy Hill name to errode the culture even more. Richmond needs a cleansing,… Read more »

“Injustice anywhere is a threat to justice everywhere. We are caught in an inescapable network of mutuality, tied in a single garment of destiny. Whatever affects one directly, affects all indirectly.”― Martin Luther King Jr., Letter from the Birmingham Jail

Ashley;
That’s the most downvotes I ahve ever seen on here!

One thing i would very much like to know is why a local police plane has been up and about every single night?

I mean, if you have 75 people walking down Monument chanting BLM slogans, it is not like they are exactly hard to find and track.

That seems like an expense that should be cut right there.

It would have been a lot to cheaper to engage with the community than to activate their militarized nonsense. A lot of what they did was a pointless waste. The money wasn’t spent on keeping looters at bay, some was spent on intimidating peaceful protests. Much of this could have been avoided by doing the right thing years ago. What is the cost of continued racism? Let’s not try to make the victims the problem here. The police budget is over $100 million. Where are the people who say schools should come first when the city hands the police a… Read more »