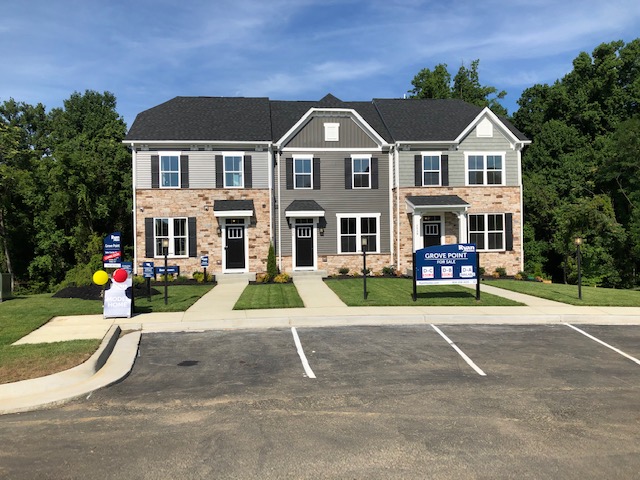 Three model homes have been built on the site, with four more units under construction. (Mark Kukoski)

Going his own way after decades with other firms, a veteran of the local development scene is wrapping up his first project under his own company.

Mark Kukoski is finishing up work on Grove Point, a 95-unit townhome development on 15 acres at 2450 Neale St., just off Mechanicsville Turnpike north of Laburnum Avenue.

The $5.5 million project is the first for Kukoski under his Arbors One LLC, which he launched in 2017 under parent company LandOne LLC. 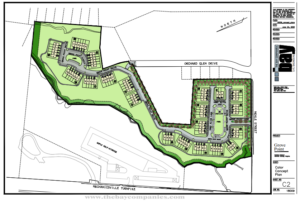 Previously an executive with Eagle Construction of Virginia, where he was vice president of entitlement and development for eight years, Kukoski worked a decade before that with local developer Hank Wilton, whose holdings included the Grove Point site when he filed for bankruptcy in 2010.

The property went in default as a result of Wilton’s bankruptcy, and Kukoski picked it up eight years later in a bank sale for $200,000. A Henrico County assessment most recently valued the land at $163,400.

Initially planned for 183 units on 20 acres, Grove Point was downsized with a redesign that Kukoski said avoided a creek crossing that would have been needed to support the additional units. 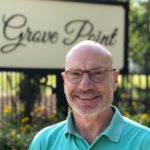 “We came up with a viable product where we can have an entry-level townhouse at 210 without having a lot of proffers,” Kukoski said.

The three-bedroom units with two or more bathrooms include a bedroom-level laundry room and stainless steel kitchen appliances. Some units include a basement or garage, upping the usable square footage to as much as 1,700.

Three models have been built on the site, and Kukoski said the first four homes are under construction. Sales started last month, with nine units under contract before Ryan held a grand opening in late June, Kukoski said.

Atlantic Union Bank provided financing for the project, which Kukoski expects to be built out over a year to 18 months.

With his first solo project under his belt, Kukoski said he’s looking for more properties to develop, with Grove Point an example he now can point to in discussions.

“I’m looking at additional property. You’ve got to get credibility and financing and equity all put together, so we’re looking for the next one to move on to,” he said. “We wanted to have this one to add credibility to when I go in and talk to people.”

The Grove Point site is one of several former Wilton properties where activity is picking back up after stalling in the wake of his bankruptcy.

Late last year, an entity tied to Lakeside-based StyleCraft Homes picked up the remaining sections of Wilton’s Iron Mill subdivision in Chester in a public auction. Property records show the builder’s LLC paid $4.18 million for the 73 acres, with 39 lots assigned to another LLC tied to the company in April.