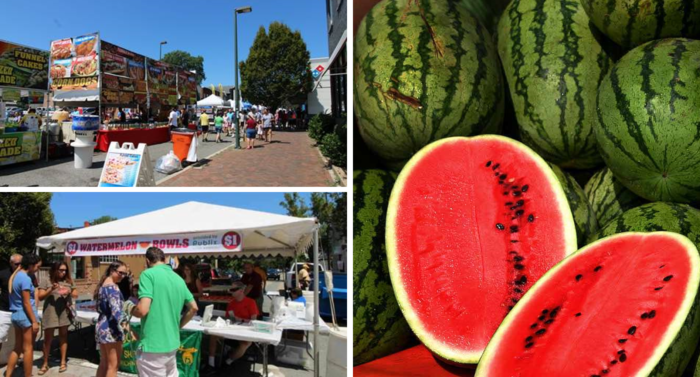 The Carytown Watermelon Festival will not happen this year due to concerns over COVID-19. (Photos courtesy Amanda Slone and Creative Commons)

With some already hurting from the coronavirus downturn, Carytown businesses are being dealt another blow by the decision to cancel the Carytown Watermelon Festival, slated for Aug. 9.

The event, which typically draws a crowd of more than 100,000, directly generates $15,000 for the Carytown Merchants Association, not counting the revenue generated by the 230 businesses in the area and the 50 vendors that set up booths.

“I’ve lost my best sales day,” said Amanda Slone, owner of Beasties and president of the CMA board. She said her gift shop at 3218 W. Cary St., which specializes in quirky trinkets, has four times the sales of a normal day during Carytown’s only festival.

CMA partners with Three One One Productions, a local event manager, to put on the event. Under current state health guidelines, gatherings of more than 250 are banned, so hosting tens of thousands from around the state on Cary Street wasn’t realistic.

“We were holding out until the last possible second to see if there was any way to make the event work,” Slone said. “It’s not just a community event. It brings in people from all over the state.”

Regardless, Slone said many were upset and disappointed by the decision, adding that the CMA is pondering ways to hold some sort of event in the neighborhood in the fall.

In the meantime, the CMA and the Westhampton Merchants Association are for the first time organizing Carytown’s Christmas in July event, to take place from 11 a.m. to 6 p.m. July 25. It will feature new merchandise from 15 participating businesses up and down Cary Street.

Sarah Nicholas, owner of Ladles & Linens Kitchen Shoppe in Carytown, is participating in Christmas in July by offering pre-orders and discounts on items such as food processors that she expects will be backordered until the fall. She said Watermelon Festival is one of her business’s strongest sales days.

“We’re still going to be focusing on having a party all summer,” Nicholas said. “We’ve just got to get creative and just come up with different avenues to get people to Carytown safely. And hopefully, you know, this isn’t a forever thing, and it will be back even better.”

Carytown has seen plenty of churn in recent months as the coronavirus took hold. Closures were reported for local brands in the neighborhood, including Need Supply and Yoga Shala, along with national chains such as Dunkin’ Donuts and Panera Bread.

Easy solution. Declare the festival a peaceful protest. Who would stop it?

Carytown and other such areas of the city will never recover as long as we have an administration that is content to let rioters and looters do anything they wish with absolute impunity.