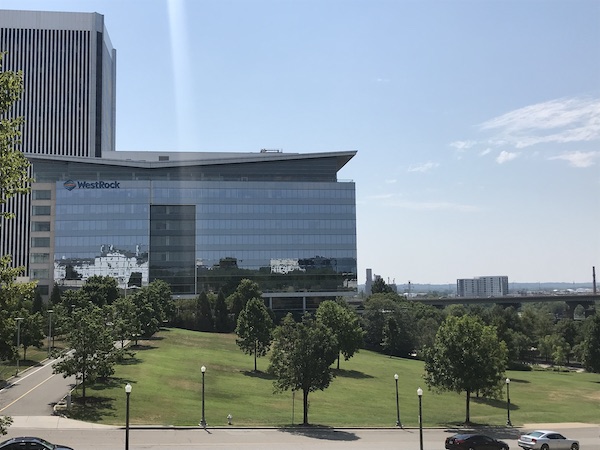 CoStar is eyeing another office building on land, pictured in the foreground, adjacent to the WestRock building. (Photos by Mike Platania)

There soon could be a new addition to the city’s downtown riverfront skyline.

Real estate research giant CoStar Group is under contract to purchase about 4 acres of undeveloped land at 600 Tredegar St., upon which it plans to build an office building, according to multiple sources familiar with the deal.

The building would rise adjacent to the WestRock building, where Washington, D.C.-based CoStar planted its local operations a few years ago, leasing the top three floors totaling 130,000 square feet. It has since grown to about 1,000 employees in Richmond. 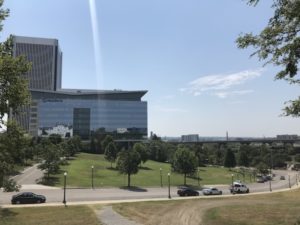 CoStar has about 1,000 employees in the Richmond region.

It’s unclear what the planned office building’s height and size will be. CoStar spokespeople declined to comment for this story. Sources say the company already has put out an RFP for design and development of the building.

The site along Tredegar Street, just across from Brown’s Island, is owned by Foundry Park II LLC, an entity tied to NewMarket Corp., whose headquarters at 330 S. 4th St. overlooks the land. The property most recently was assessed by the city at $17 million. NewMarket could not be reached for comment.

CoStar’s desire for the riverfront property is a change of course from earlier this year, when it announced its intentions to fill a 400,000-square-foot office tower within the ill-fated Navy Hill development.

That announcement was made as the Navy Hill proposal was nearing collapse, as its developers were attempting to overcome the scrutiny from the opposition and city council.

Some members of the development group from Navy Hill now are trying to salvage part of the project that includes an office tower, but CoStar is not involved with that new initiative.

Not looking at this as good news. Our riverfront is filled with office buildings, industrial sites and railroad tracks.

What concert venue is on the river?

I’m guessing he is referring to the Folk Festival and Friday Cheers events.

Ian is correct. I consider Brown’s Island an outdoor concert venue. Also the Canal Club is right along the canal further down. They used to have Toad’s Place or whatever that was, but that is now office work space.

Browns Island I suppose, it is multi use so i didnt think of it, but the Canal Club is not riverfront.
If you go to Lynchburg, you’ll see a much better pound for pound use of the river front in my opinion.

You can get into specific of venues and such, but the point I was trying to make was that the uses along our riverfront/canal walk really do vary and are not simply industrial, office, and railroad tracks. Yes, there could be a lot more use of it, but there is still the possibility for it.

Even in the darkest hours, the sun will rise again in the morning. Richmond is perceived as an excellent corporate relocation opportunity and will continue to grow and evolve into a better city than it is today.

This would be a prefect chance for the developer of this new building site to build a new set of 100 foot long by 16 foot Kanawha Canal Locks and relink the lower Kanawha to the upper James River and Kanawha Canal. They even dumped a lot of the original hand cut stone lock stones from when they built the RMA Expressway nearby. The Haxal Kanawha Canal bypass was proposed in the 1830’s and 1850’s but the canal builders wanted to avoid the owners of the Haxall Mill Race. This section of canal also had ten people die building it… Read more »

I question the wisdom of building office space at this time. I anticipate a surfeit of office space everywhere as many employers will continue to allow their workforce to work remotely even after the Covid19 sItuation is resolved. I think that’s a good thing, as that it will keep many cars off of the roads thus improving air quality.

Perhaps they should have a hired a Commercial Real Estate research firm to help make the decision.