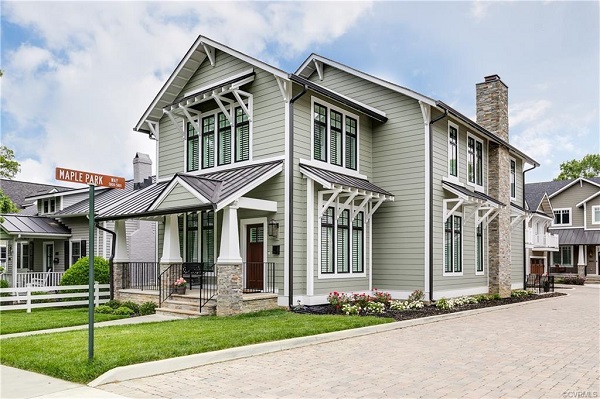 One of the completed homes at Maplewood. (CVRMLS)

As two larger but similar projects receive scrutiny nearby, another residential infill development in the Westhampton area is wrapping up – four years after it started.

Developers Edward Hettrick, John Vinis and Claude Whitehead III are nearing the finish line on Maplewood, a cluster of four houses fitted into two subdivided lots in the 500 block of Maple Avenue in the Libbie and Grove neighborhood.

Three of the homes have sold, at prices ranging from $887,000 to $1.2 million, and the last house, about six months from completion, is listed for sale at over $1.38 million. 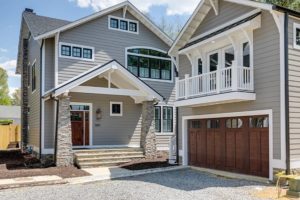 The homes are around the corner from The Tiber condos at Libbie and Guthrie avenues, where one of the 15-unit building’s penthouses sold for $1.6 million in 2018. The other penthouse was listed this year at nearly $2 million.

The group started Maplewood in 2016, when two rental houses were razed to make way for the development. Operating as Tri-American Properties LLC, they purchased the two lots totaling about a half-acre for $610,000 combined.

Whitehead, an attorney whose law office is adjacent to the property along Libbie Avenue, attributed the project’s duration to time required to secure city zoning and permit approvals. He and Hettrick put the overall cost of Maplewood at about $4.5 million, stopping short of saying whether they took a loss.

“We’ll see how it turns out in the end,” Whitehead said. “It’s just been an expensive project; that’s the way it goes.”

Whitehead described the project as working out as envisioned but acknowledged that their returns were not what they had hoped, due to costs for materials and contractors that escalated as the project dragged on.

He said it took about 18 months to secure a zoning change to allow detached houses without a homeowner’s association, a plan that he said took some convincing of neighbors and City Council.

“It took a year and six to eight months before we could even get started,” Whitehead said.

A 2016 photo of the construction from Maple Avenue. (BizSense file by Jonathan Spiers)

Added Hettrick: “We had no idea it was going to take as long as it did, and time is money. Part of the problem was it took much longer, so that ate into the budget. It was a bigger, longer project than we had anticipated.”

Nonetheless, the developers said they are pleased with the final product, which they said they stuck to despite the time and budget challenges.

“We really went high-end on most everything that goes into them, because of its location and what we were trying to do,” Hettrick said.

Ranging from three to four bedrooms, the homes each have around 3,000 square feet and include a detached garage with an upstairs room that can be used as a guestroom or studio. The homes share a driveway off Maple, with the garages located between two unit pairs. 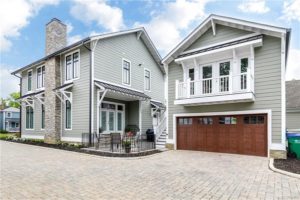 Each home includes a detached garage with upstairs room.

The homes include conditioned crawl spaces, aluminum-clad windows and stone foundations and chimneys. Homebuyers were able to customize designs, with options for elevators and other add-ons available.

The final house at 501 Maple Ave. totals 3,200 square feet with four bedrooms and three bathrooms. The group is finishing up work on the home’s interior, and Whitehead said they’ve fielded interest from prospective buyers. They listed the home with Jenny Maraghy with Joyner Fine Properties.

Whitehead said exterior work is continuing and the home is scheduled for completion in six months. The group worked with Wes Mallory of Mallory Electric in Mechanicsville and Thomas Sprouse of Creative Conservation in Ashland, among other subcontractors.

Describing Maplewood as a learning experience, Whitehead said, “It’s been fun, and I think it turned out looking really nice in the end. 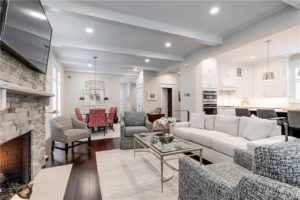 “Our returns were not what we hoped due to the expense of materials and contractors. However, we are very proud of what we built in the Westhampton neighborhood, and the owners are very happy with their little neighborhood,” he said.

As Maplewood finishes up, two more infill developments are being proposed in the area – continuing a trend of adding density seen in other projects such as the Chadwick on Grove condos and Westhampton on Grove.

Eagle Construction of VA is looking to build two rows of townhomes totaling 14 units on a pair of lots at 509 and 511 Libbie Ave. And Richmond Hill Design + Build plans to replace six homes in the 500 block of Westview Avenue with two clusters of homes totaling 12 units. Both proposals are under review with the city planning department. 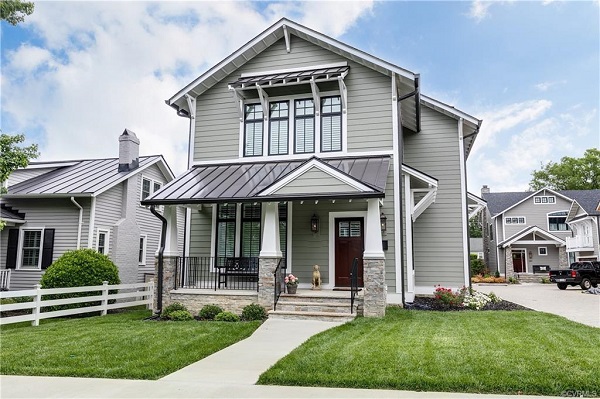 The four homes share a driveway off Maple Avenue.

Too bad Eagle is moving in with townhouses, they will bring a very plain look to the area.

Their story about the time consuming processes for approvals and inspections is not an anomaly. It’s the norm. There was an estimate–pre COVID– that $1.0 B in residential and Multi-family construction was tied up in years long planning and inspection processes at City Hall. That’s more than $1.5 M per month in lost tax revenue, or about $18M per year. The City does not require a tax increase. It needs to put its resources to work to uncover the lost revenues. (Of course, I realize we have another set or two of issues fronting us that were not costing the… Read more »

The city needs to hire more folks for that department doesnt it? It can’t cost 1.5 Million a month toincrease that staffing.