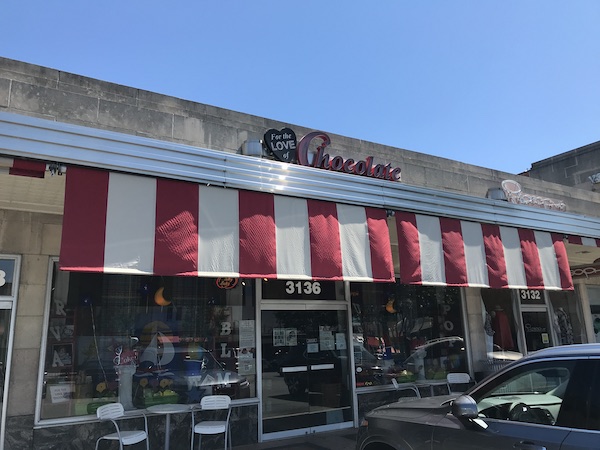 For the Love of Chocolate, a candy store in Carytown, recently came under new ownership. (Mike Platania)

A longstanding sweets shop in Carytown has changed hands.

For the Love of Chocolate at 3136 W. Cary St. is now owned by Elizabeth Vranas. She is the second owner of the longstanding candy store, buying it from James Kinard, who started the business almost 30 years ago.

Vranas declined to discuss terms of the sale. She became the owner effective Saturday. Her husband Ron Vranas is her business partner.

For the most part, it’ll be business as usual under new ownership. The only change Vranas plans is a greater emphasis on marketing and branding. The store elevated its social media presence with new Facebook and Instagram accounts. Vranas also would like to roll out store T-shirts and hats, saying customers have expressed an interest in merchandise.

“It’s not broken, so there’s nothing to fix,” she said. “We’re just getting the word out there.”

Vranas had worked full time at the store for three months prior to assuming ownership, though her association with For the Love of Chocolate stretches back further.

Vranas did some marketing work for Commonwealth Endodontics for a time (Ron is an endodontist and partner at the practice), and For the Love of Chocolate was a source for business gifts. Both her oldest son and, more recently, her youngest daughter have worked at the store.

Vranas began conversations with Kinard about buying the store after her daughter came home from work one day distraught that Kinard planned to retire. Vranas, who also had done stints as a teacher and stay-at-home mom, said she and her husband had been on the lookout for a new business venture, and had played with the idea of getting into real estate. A candy store seemed more fun, and Vranas was motivated to save the popular destination for people with a sweet tooth.

“It’s such an iconic Richmond landmark. Whenever we had guests from out of town, we would go three places: The American Civil War Museum, World of Mirth and For the Love of Chocolate,” she said.

The store is 3,000 square feet and has seven employees. It’s located within Cary Court, where earlier this summer French restaurant Can Can Brasserie also changed ownership.

So glad For the Love of Chocolate will be sticking around! It’s the sign of a great business and brand when it lives past the owner/visionary retiring. Kudos to James Kinard and Elizabeth Vranas!

This is wonderful news for the chocolate lovers of Richmond. Best of luck and of course, I will see you soon.