The front elevation of the building as it would appear along Mosby Street. (Images courtesy City of Richmond)

A local developer known primarily for rehabbing houses in Church Hill is moving up to multifamily construction in Union Hill.

Sam Tuttle’s Streetcar Properties is planning a three-story, 15-unit apartment building at 715 Mosby St., between Carrington and Venable streets and across from the Jefferson Townhouses rental complex.

The structure would fill a roughly half-acre site that previously housed a fast-food restaurant building, which Tuttle said he razed due to liability concerns after the previous tenant’s lease ran out. The building most recently housed Mosby Express Market and Deli.

The market-rate apartments would consist of a dozen one-bedroom floorplans and three two-bedrooms ranging from 680 to nearly 1,000 square feet. The units would have a corresponding number of bathrooms. 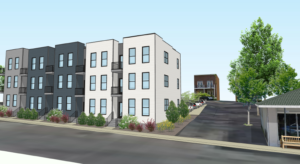 A view of the apartments in relation to surrounding buildings.

Plans for the project have been filed with the city, and Tuttle said he is working to line up financing for a 2021 construction start. Richmond’s architectural review commission is set to consider the project at its Aug. 25 meeting.

Tuttle, a Church Hill resident with a master’s degree in urban and regional planning from VCU, described the apartments as a departure from his previous work in Richmond, which he said has consisted of single-family home renovations in the Church Hill area using historic preservation tax credits.

“This project, while obviously small for a lot of folks because it’s 15 units, it’s big for me and a departure,” Tuttle said. “I have an interest in the area and had an opportunity to purchase this property a couple years ago, and I’ve just been kicking around ideas of what to do with it.”

Streetcar Properties paid $300,000 for the property in June 2018, city property records show. The seller was an entity called BRD Land Development LLC. A city assessment that year valued the then-improved property at $150,000. The most recent city assessment valued the now-vacant site at $62,000.

While the apartments would be new construction, Tuttle is looking to capitalize on the site’s location within a state Opportunity Zone, which makes the project eligible for potential tax benefits for its investors.

He said he’s also pursuing financing that would set rents at what he considers a market rate for that area. He said specific rental ranges would depend on that process playing out. He did not disclose a cost estimate for the project.

Tuttle said he was attracted to the property when it was listed for sale due to its proximity to the Martin Luther King Jr. Memorial Bridge that connects Union Hill with VCU Health’s MCV campus, and to roads set to be improved through the city’s Shockoe Valley Streets Improvement Project. He also noted the site’s proximity to shops and restaurants in Church Hill.

The site also is around the corner from the fast-transitioning Carrington Street, a cobblestone road parallel to Venable that has seen construction activity picking up in recent years. Recent developments between the streets have included Better Housing Coalition’s Goodwyn at Union Hill apartments, and more residential infill projects are in the works.

Tuttle, a Williamsburg native who relocated to Richmond in 2008, said such activity makes the location a safe bet.

“Whether you’re an MCV student or you work there, you’d be within an easy walk and a bike ride to that location, so there’s a great in-place demand driver for housing that’s that close,” he said. “It’s kind of an untested area in other ways; there’s a lot of vacant land and things like that.” 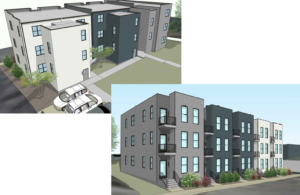 The one- and two-bedroom units would include mini-balconies and on-site parking.

Plans describe the building’s exterior as consisting of cement lap siding and vertical metal panels. Elevation renderings show the façade would vary in colors, but the colors have yet to be selected.

Each unit would include a mini-balcony with metal railings, and a reserved parking space. Tuttle said he also wants to provide sheltered bicycle storage, noting existing and planned bike lanes in the area.

510 Architects is designing the apartments, and Tuttle said UrbanCore Construction is lined up as the contractor. If approvals and financing allow for a project start next year, he said he’s aiming for construction to be completed in early 2022.

The construction going on in this immediate area is becoming less and less appealing. I am not an advocate for government intervention in this regard. Rather, I hope the developer will come up with something more appealing. (We already have a “stack-o-boxes” across the street.)

The problem with that is if they’re to keep them affordable, they can’t really go with a complicated designs that requires more money to construct. Affordable designs for affordable housing. I’m sure they don’t want gentrification in that area anyway.

I’m perplexed by the economics of this. The comment that’s always made is “it’s too expensive to build something… that looks historic/more aesthetic/more whatever. “They won’t be affordable if they do that.” And so on. I don’t buy that explanation. I’m going to go through what I think this project would need to be decent looking and blend in with the older buildings in the neighborhood, and try to put a number to the cost difference. Maybe someone can tell me where I’m going wrong here, what I’m not understanding, etc. – because it seems like doing this “correctly” rather… Read more »

Yes I would love a more traditional design with a cornice of some sort, brackets under the balconies and corner boards with horizontal painted siding. Good luck to Mr. Tuttle and congratulations on your project!