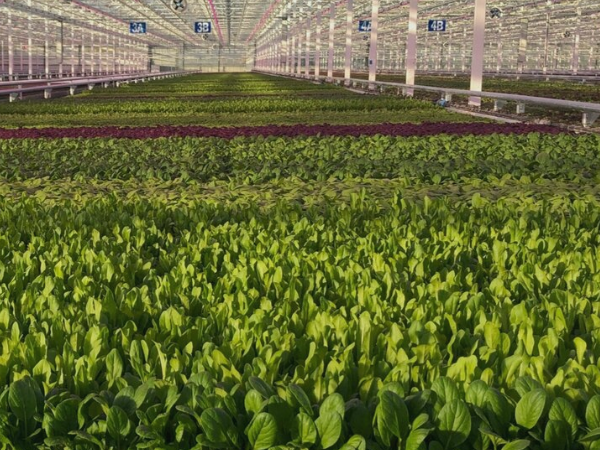 An agriculture startup’s $17 million hydroponic farm is beginning to sprout in Goochland County.

Greenswell Growers Inc. expects to have its 77,000-square-foot hydroponic farm up and running at West Creek Business Park in spring 2021. Site work has begun on the farm, which is expected to grow almost 3.7 million pounds of baby greens in its first three years of full operation.

The produce will be sold in grocery stores under the Greenswell Growers brand across the Mid-Atlantic region. Five percent of the output will be donated to local food banks, including Feed More.

Greenswell Growers is the brainchild of Chuck Metzgar, formerly the managing director at consulting firm Mercer; John May, president and CEO of the Center for Innovation and Development in Kilmarnock; and Feed More President and CEO Doug Pick.

The venture is an attempt to peel off some of the domestic greens-growing business from its center-of-gravity on the West Coast.

Metzgar, Greenswell’s board chairman, said the facility is three years in the making. The company liked West Creek because it was close enough to an urban center for ease of transportation and brand awareness, but rural enough to have a large property that wouldn’t need rezoning.

“We wanted to be on the edge of the urban and rural (areas),” he said.

Greenswell owns the site of the future facility at 1343 Hockett Road. The 30-acre property was transferred to Greenswell by West Creek in April, according to county property records.

Online property records don’t record a cost related to the transfer. Metzgar declined to provide further information except to say that an owner of West Creek is on Greenswell’s board of directors. The business park is owned by Pruitt Cos. and Riverstone Group.

Metzgar said a Northern Neck site was considered but transportation costs were prohibitive. The company also considered Powhatan and Hanover counties, but couldn’t find a site with the right electrical power infrastructure needed.

“We couldn’t find that sweet spot,” he said.

The governor’s office announced the facility Aug. 11. The fully automated, indoor system will grow produce year round. The facility is the fifth of its kind in the country, and will have a 28-times higher yield per acre than a traditional farm. The facility will create 27 new jobs.

Greenswell will also set up its headquarters in the facility. The greenhouse is the first of several expected to be built on the site.

Greenswell hired CropKing, an Ohio-based hydroponics firm, to advise on greenhouse management and other aspects of the hydroponics business.

Hydroponic farming involves growing plants indoors without the use of soil. The method has some advantages over traditional farming — it is more space-efficient and uses less water.

The vast majority of the funding for the West Creek venture comes by way of bank loans and investors. The project is also fueled by $260,000 in state and local grant funding. Half of the total is sourced from the Governor’s Agriculture and Forestry Industries Development Fund. The other half comes from Goochland County.

Greenswell made initial contact with Goochland County about the project two years ago. The facility is a win for Goochland because it brings a modern food production facility and jobs to the county, in keeping with the county’s roots as a farming community, said Casey Verburg, the county’s economic development coordinator.

“It’s agriculture at its heart and that’s what Goochland is known for,” Verburg said.

West Creek is the site of offices for several major companies, including CarMax, which plans to beef up the staff at its customer contact center there, Capital One and Performance Food Group.

Though the company intends to focus on greens in the near-term, Metzgar said the company would diversify its produce in the future.