A rendering of the planned apartments. (Images courtesy Larry Shaia)

With a new development team on board, a revival is underway for a long-stalled project in Hanover’s Atlee area that’s set to add hundreds of homes and a mix of office and retail uses.

Construction plans for the first phase of the Caldwell Park development along Chamberlayne Road south of New Ashcake Road have been filed with the county and are pending review, following changes to the project that were approved in January with the addition of developer Larry Shaia.

Shaia’s Charter Realty and Development Co., based in Mechanicsville, has taken on the project through a partnership with Richard Hollins and Dennis Young, who bought into Caldwell Park after its initial zoning in 2015. Hollins and Young own the nearby Atlee Auto Service repair shop and also were landowners for Marley Pointe, a townhome development behind the shop. 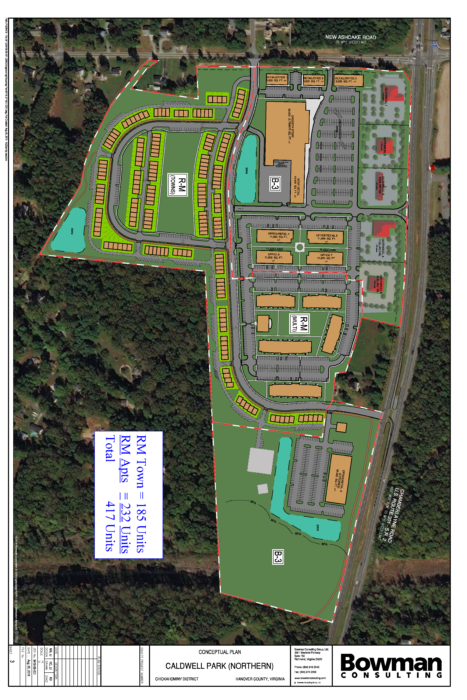 Earlier this year, the group purchased about 67 acres that make up the project site in two deals totaling $4.57 million. The purchases, which closed Jan. 31, were made through an entity called Caldwell Partners LLC, which Shaia said also includes members of his family.

County property records list the sellers as Mary Lynne McDougle and Caldwell Commercial LLC, which Hollins and Young used to purchase a 23-acre parcel in late 2016. McDougle owned the rest of the land, consisting of four parcels. The latest county assessment valued the five parcels collectively at nearly $4 million.

Just prior to the transactions, the county approved changes to Caldwell Park’s plans reflecting Shaia’s involvement in the project. The number of planned apartments was reduced from 286 to 232, and the number of townhomes increased from 131 to 185 — resulting in no change in overall residential density.

The project remains approved for up to 200,000 square feet of commercial space, which would be anchored by a potentially 84,000-square-foot shopping center that’s planned to include a grocery store.

The rest of the commercial section would consist of seven smaller retail or office buildings, five outparcels fronting Chamberlayne, and a 52,000-square-foot office or retail building farther south along Chamberlayne. Three of the five outparcels are designated on plans for use as retail and/or gas stations. 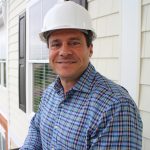 The 232 apartments, which Shaia is building, would comprise five buildings in the heart of the development, while the 185 townhomes would fill the west side of the site. Shaia said another builder would be brought on for the townhomes. Shaia’s firm also would build the smaller retail or office buildings, which would range from about 6,000 to 12,000 square feet.

Pending approval of the construction plans, Shaia said he’s aiming to break ground on site development next spring with construction on the first phase starting in late summer or early fall. He said construction would take two years to complete.

The first phase would consist of the apartments, 35 of the townhomes, and the shopping center. Shaia said he’s in talks with a potential developer for the center, which he said is under contract. He would not disclose the prospective buyer or any potential tenants.

“I would love to have a grocery store. It’s up to them what they want to put in there,” Shaia said, referring to the buyer.

Of Caldwell Park on the whole, Shaia said, “It’s going to be a walkable community. I envision the nicest community in the West End and bringing that to Hanover County.”

Shaia is working with engineering firm Bowman Consulting and landscape architect CiteDesign, both of which have been involved in Cardwell Park from the start. Winks Snowa Architects is designing the apartments, which Shaia said will be similar to his recent Cambridge Square Apartments and his nearby Charleston Ridge complex in Atlee Station.

Like Cambridge Square, the bulk of the apartments would enclose a central courtyard and pool accessible only through the buildings. Other amenities would include a 9,000-square-foot, two-story clubhouse, which would be open to townhome residents as well as apartment tenants. Shaia said it’s undecided whether the townhomes would be rental or for-sale units. 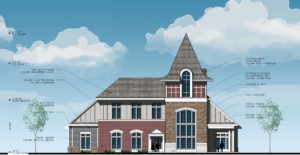 A rendering of the clubhouse.

Shaia would not disclose his overall cost estimate for Caldwell Park, which he said he has played a big part in reviving.

“I’m the one that put it all back together,” Shaia said. “It was for sale, I brought the parties together. The people who own the shopping center (site), I asked them to be part of the deal. They were very receptive. We’re all locals.”

Originally planned for 120 acres, Caldwell Park had included a 115-home subdivision on about 48 acres farther south along Chamberlayne. HHHunt picked up that part of the project two years ago, and the subdivision, called Rutland Grove, is now taking shape, with HHHunt Homes and CraftMaster Homes building the lots.

Thank you for the large graphic (Site plan), I was able to see all of the details!

I really hope they build a new wide sidewalk or bike path along US Route 301 Chamberlayne Road to avoid this road turning into a 1970’s style pedestrain nightmare were the state and county have to spend tens of millions of dollars 10 to 20 years later to add sidewalks to it.