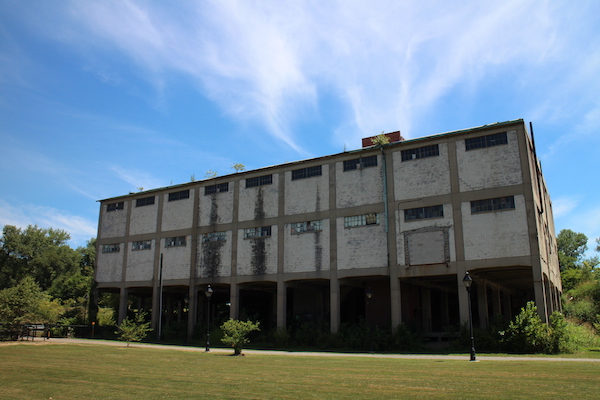 Six months after learning the Intermediate Terminal building is in better shape than previously thought, the city’s Economic Development Authority has voted to study what the land surrounding the century-old building could be used for.

The Richmond EDA last week voted to commission a study at 3101 E. Main St., near Rocketts Landing. The civil engineering study, which will be conducted by Timmons Group, will examine planning opportunities for the property’s riverfront land owned by the EDA. 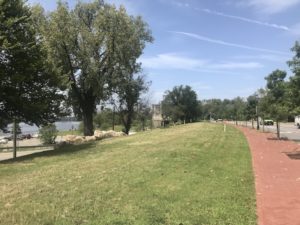 The city’s EDA commissioned a study of the rest of the land surrounding the Intermediate Terminal building, seen in the background. (Mike Platania)

The study would not include recommendations as to whether to demolish the building itself, which had been slated to be converted into a bistro for Stone Brewing Co.

However, that project has been in limbo since 2018. The city and Stone halted those plans after a study found that the building was structurally insufficient to be converted. That prompted the EDA to ask the City Council’s permission to demolish the building, but the matter was never voted on.

The saga took a twist in February, when a second structural engineering report indicated that the building was “more than capable” of supporting a restaurant. The report’s result came as a surprise to both the EDA and Stone, and the brewery is still working with the city to evaluate options for a Richmond-area bistro.

The San Diego-based brewery is also amid a leadership change as its former CEO Dominic Engels resigned earlier this month.

The study commissioned last week will examine the rest of the building’s 1.5-acre parcel, most of which is greenspace extending to Main Street’s intersection with Nicholson Street.

“(This study) is simply to level-set with the city with what we can do with this property, and it’s timely given where the city is with its various planning agendas,” said EDA Chairman John Molster, referring to efforts such as the city’s Richmond 300 master plan update.

Timmons principal Tim Davey told the EDA that the study would look at things such as how much construction square-footage the land could accommodate, and the land’s accessibility now that Main Street’s been redesigned and Water Street, which ran underneath the building, is no longer accessible to traffic. 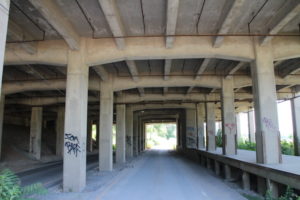 A February photo showing the footings of the building. (BizSense file photo)

“It’s very much a land-planning exercise more on the technical side of, ‘How do we preserve the highest and best development potential for your site?’ It’s not necessarily looking for individual uses for it,” Davey said.

He said the study should take about 30 days to complete. The study will cost $12,000, and the funds will be taken from the EDA’s operations account.

The EDA also voted last week to extend the performance agreement deadline between the city and Bon Secours regarding the redevelopment of the former Westhampton School site and the expansion of Richmond Community Hospital in North Church Hill.

The old Westhampton School site at 5800 Patterson Ave. is being converted by Thalhimer Realty Partners into a $73 million mixed-use development that will include more than 120 apartments along with office and retail space. The project recently landed Spider Management as its first office tenant.

Rhodes Ritenour, who’s been leading both projects for Bon Secours, told the EDA that delays caused by the pandemic won’t allow the health system to meet the job creation and payroll deadlines for either the Richmond Community Hospital or Westhampton School projects.

The EDA approved Bon Secours’ request for an eight-month extension for both projects, bumping the deadline for Richmond Community Hospital and the Westhampton School to Dec. 31, 2022.

If the brewery chooses to use the building pictured above, I hope they open it to the river with large picture windows and terraces, rather than preserve the “historic” facade. Its one butt ugly building.

Bruce, you are on point in mentioning the need for windows with a view in the terminal building. The bays are quite handsome but at some point they were filled up with cinder block and awning style windows above. Stone chose to rely on their California based architect and downplay advice from local architects about how many heating and cooling days there are in Richmond v. San Diego. By insisting on fully opening up the bays with glass windows on 3 sides Stone created a need for more HVAC and created potential sheer problems for a building built like a… Read more »

How come Bon Secours continues to receive these sweetheart deals from the city? It is not even close to the original deadline yet and they are already presenting excuses asking for more time. It’s bad enough that they got the keys to the property in a back room deal. The least they could do is meet their commitments to the taxpayers.