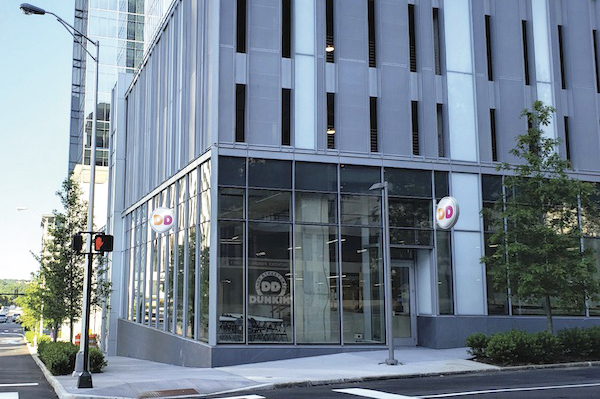 A rendering of the soon-to-open downtown location. Courtesy Lou Cabral.

A local franchisee of the donut and coffee shop chain is preparing to open three new locations, including the ground floor of the Richmond-based utility giant’s 22-story 600 Canal Place tower at 600 E. Canal St.

Lou Cabral, who operates Dunkin’ locations mainly in the Richmond suburbs including Henrico, Midlothian, Hopewell and Powhatan, also is working on new locations in Short Pump at 3125 Lauderdale Drive and in the West End at 2300 Hungary Road.

Combined with the Dominion tower location and another on Brook Road, Dunkin’ has four new spots coming to the region, three of which are ground-up construction. They’ll bring Cabral’s local store count to 13.

Cabral, who grew up in Dunkin’s home state Massachusetts, was drawn to the brand at a young age.

“I’ve been doing Dunkin’ since I was a kid,” he said. “My dad knew some franchisees in Massachusetts. So I did that as summer jobs, then did it in school part time. I caught the bug and stayed on with it.”

He owned some franchises in upstate New York prior to moving to Richmond about five years ago.

Cabral is leasing about 2,900 square feet in the Dominion tower for his store, which he said he hopes to open in December. About 1,800 square feet of retail space remains available at Dominion’s 600 Canal tower. 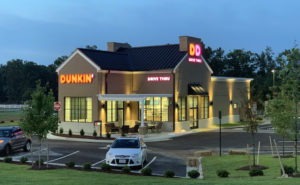 Out in Henrico near the intersection of Hungary and Woodman roads, Cabral is building a 2,300-square-foot Dunkin’ on a 0.8-acre parcel he purchased last fall for $450,000. He said that location is set to open in October.

The Lauderdale location, which Cabral said he’s leasing from The Wilton Cos., is set to open in November, followed by the Brook Road location in December. CBRE’s Susan Jones represented Cabral in each deal.

Cabral said every location except for the Dominion tower location will be outfitted with a drive-thru, something that’s become paramount during the pandemic.

A different Dunkin’ franchisee, Greg Nigro, recently shuttered his Carytown location while looking for another location in the neighborhood that has a drive-thru.

Going forward, Cabral said, he’s looking to more than double his amount of local Dunkin’s over the next four years. His goal is to reach 30 stores.

“Next year, I hope to do another two or three locations. I definitely want to get into the Twin Hickory area, somewhere on Parham or Quioccasin, and another on West Broad near Willow Lawn. I’d also like another in Goochland and Powhatan. Wherever I’ve got stores I’m trying to infill,” he said.

Dunkin’s expansion in the run comes as other donuts brands are contracting in the area. Locally-based Sugar Shack recently shuttered its Parham Road location permanently.

Great idea- just wonder why now? No one downtown. Might want to wait and see how this virus stuff shakes out before they go brick and mortar.

I think there are a lot more people downtown than you think, and having another quick option in the Cary and Main Street downtown business districts will be great. There are also several apartment buildings and hotels down there too, so depending on the Dunks’ hours, they will likely stay busy.