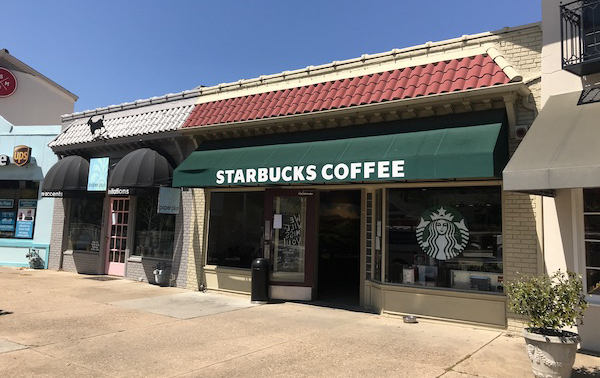 Stella’s Grocery will open a new West End location at 5802 Grove Ave., which was formerly home to a Starbucks. (BizSense file photo)

Stella’s Grocery, the local chain of neighborhood markets run by restaurateurs Katrina and Johnny Giavos, has scooped up a space on Grove Avenue, extending the brand’s reach into the West End.

The company recently inked a lease for a new location at 5802 Grove Ave., which had been home to Starbucks before it vacated in April.

It’ll be the fourth location for Stella’s grocery, joining its flagship store at 1007 Lafayette St. in Malvern Gardens, one downtown at 109 E. Grace St. and one in the HandCraft Building in Scott’s Addition.

Katrina Giavos said she has admired the Grove space, which is owned by Charlie Diradour, and felt the area had the foot traffic and support for other Giavos ventures to allow the concept to flourish.

“We also have the Continental (at 5704 Grove Ave.) and I always just liked the little spot and thought it would make a great market,” she said. “We have huge neighborhood support and there are a lot of people walking around Libbie and Grove.”

Giavos hopes to open the doors to the new market in the spring. It’ll have roughly 2,000 square feet and patio seating. She said the plan is to make it a similar experience to the Lafayette Street location.

Stella’s stores offer made-to-order sandwiches and salads, prepared entrees, beer and wine, candies and specialty groceries among other items. It will have some nearby competition when it opens on Grove, which is around the corner from gourmet grocery Libbie Market.

In addition to Stella’s Grocery and the Continental Westhampton, Giavos and her husband also own the restaurant Stella’s at 1012 Lafayette St., along with Kuba Kuba and The Sidewalk Café, among many others.

These markets are fantastic. The prepared foods are amazing and this spot will be really successful. Isn’t there a location also coming to the new development anchored by the Veil on Forest Hill Ave.?

Amazing! So excited to hear this news! Stella’s Grocery is the best!

Adding Stellas Market is such awesome news! Would love to see a pizza/ pasta joint open in Cafe Caturra!

If these markets are small at the size of a Starbucks then they could try putting one in at Powhatan Courthouse which has a small acre commercial pad at the intersection of General Scott Boulevard and Old Buckingham Road that would be good for one of these. In that this location has 100 homes with in 2,500 feet of it with another 50 homes being built all located along sidewalks. Another possible locaton would be to build one of these small stories inside of halsey neighborhood which is growing quite fast and has trail system they could put one of… Read more »

I think one can assume from their (understandable) location choice that they are aiming for urban density.

Agreed. Urban density plays a big role as does familiarity with the area. The Giavos family has not placed many restaurants or markets outside of the city limits for a reason—It’s the demographic they know and that’s how you grow a brand.

So glad a local firm is going in there 🙂

Love love love. Best of luck to a Richmond staple anchoring yet another key location in the city.