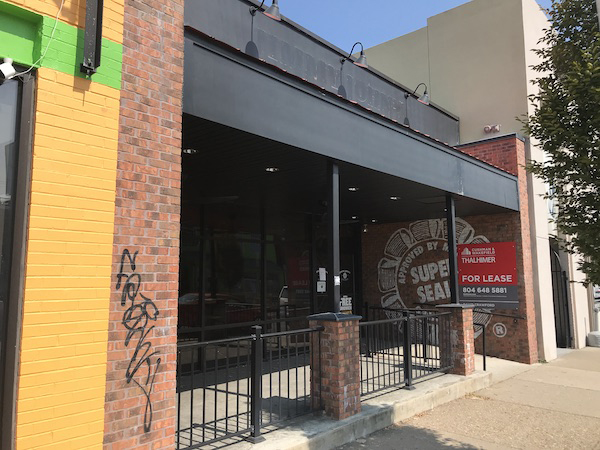 For the third time since the start of the pandemic, a national restaurant brand has exited Carytown.

The Jimmy John’s location at 3314 W. Cary St. closed in recent weeks. The Illinois-based hoagie chain had been in the space since 2014.

The closure comes about a year after Jimmy John’s went under new ownership. Last October, it was sold to Inspire Brands — a parent company that also owns Arby’s, Buffalo Wild Wings, Sonic and Rusty Taco.

The Carytown location was a franchise originally opened by local attorney Gray Broughton, who had several other locations in the region, including one in Shockoe Slip and on Franklin Street near VCU. Reached Thursday, Broughton said he sold his Jimmy John’s holdings to another unnamed franchisee in 2015.

The 2,300-square-foot space on West Cary, flanked by spa StylePod and Virginia Veterinary Centers, is being marketed for lease by Thalhimer’s David Crawford.

It’s the third national brand to close a location in Carytown during the pandemic. In June, both Panera and Dunkin’ closed their shops in the neighborhood.

Meanwhile, another national chain is preparing to enter Carytown a few blocks west. Publix, the anchor tenant of the 120,000-square-foot Carytown Exchange development, plans to open by the end of 2020.

I never understood how they stayed open for 6 years given how little foot traffic I saw there. Places like here and subway haven’t adapted well to changes in taste.

This location never had a following. I have thought for quite a while that Carytown is loosing it’s appeal. No foot traffic during the week, only on weekends and this is during good times. Too many restaurants and now with that big eye sore that will host Publix it will loose even more appeal. It is no longer what I consider a Main Street destination for local Mom & Pop operations.

For Fast food like that, it’s all about deleivery and take out now. Both of thse were hard to do in Carytown.

Yeah, but the government has “kept us safe”. The death rate from pure Covid-19 is about 12,000 according to CDC analysis. What brings the total up to nearly 200,000 is that they are counting any death in which the dead person had tested positive for Covid-19 even if the Covid-19 had nothing to do with the reason for death. Even if one accepts the number of COVID-19 deaths touted in the media, that number is dwarfed by the millions of lives absolutely ruined by the shutdown of the economy. The entire country has been ruined because of faulty models projecting millions… Read more »

How did they let Russian Bots infiltrate here?

Has anyone ever seen a more downvoted comment on here?

Why is this comment allowed to stay? It has nothing to do with Jimmy John’s closing and it’s promoting a dangerous conspiracy theory.

Steve Richmond, “The death rate from pure Covid-19 is about 12,000 according to CDC analysis. What brings the total up to nearly 200,000 is that they are counting any death in which the dead person had tested positive for Covid-19 even if the Covid-19 had nothing to do with the reason for death.” Total B.S. on your part! You are perpetuating a conspiracy theory! You like others trying to confirm your bias are twisting the Centers for Disease Control and Prevention (CDC) report to imply the COVID-19 death toll is not as serious as it sounds. The point that the… Read more »

Not the pandemic on this one. The business model is flawed not enough choices coupled with terrible quality meat served on a huge loaf of stale bread. The entire franchise needs a rebranding. The contrasting colors of the logo univiting restaurant atmosphere. You can go to Wawa and get a much better sandwich quicker better quality and for less money.

The loyal following of Mary Angela’s directly across the street didn’t help either.

The shop has only been closed for a few weeks and already it’s been tagged with graffiti. I live in Carytown and I can tell you the graffiti is everywhere and windows are still being broken. A lot of people are scared to come here. Folks can get on soapboxes and pass judgement and talk about how everyone who disagrees with them is racist but it’s accomplishing nothing. Denial is contributing to the downfall of Richmond retail.

This really is a problem. It’s not just Covid. All the years of fighting against graffiti, which really is corrosive to the city, are going for nothing – it’s worse than before the fight started now.

The city really needs to step up on this. It’s one of my big problems with Stoney – he’s been an ok mayor, but he’s done nothing for basic city functions, which are going to hell across the board.

The graffiti creates a perception of civil unrest and danger in many people’s minds. It’s an untrue and unfair perception but it’s driving many people away, nevertheless. Kim Gray has alluded to the fact that as Mayor she would make public safety more of a priority. She has my vote.