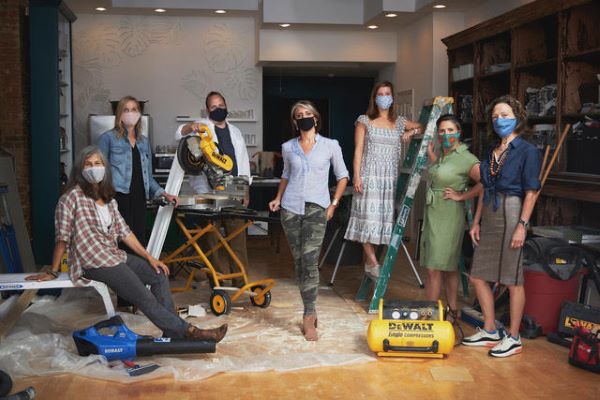 The Flourish Collective is a pivot into retail by interior design firm Flourish Spaces. The collective’s retail showroom features pieces from several firms and designers. From left to right: Wendy Umanoff of Umanoff Designs; Whitney Forstner of Art for the Home; Jamie Coffey of XOJCO; Stevie McFadden, Alicia Conrad and Diana Mathews of Flourish Spaces; and Sarah Rowland of The Sarah Rowland Collection. (Photo courtesy of Flourish Collective)

Seeking a new way to engage with customers amid the coronavirus pandemic, a local interior design firm is inviting folks into its building to shop.

Flourish Spaces plans to unveil the Flourish Collective, its new retail showroom, in the fall. The move adds a retail element to the Jackson Ward firm’s offerings, allowing customers to browse the showroom on a by-appointment basis to purchase decor, art works, furniture and other items. It also offers designers a chance to bring clients to see products in person.

“This feels like the next chapter, the next iteration, of our story,” Flourish Spaces founder Stevie McFadden said. “The pandemic has made a lot of us think differently about what we do.”

Though the concept is a response to the pandemic, it draws some influence from McFadden’s own experience as both an amateur and later a professional designer. As a design enthusiast, she was frustrated that she didn’t have the same access to product lines that the professionals had. As a pro, she likes the idea of being able to have clients actually see the product before they buy.

“A lot of clients still want to touch, to feel and to be immersed in these things before they pull the trigger,” she said.

The concept is pitched as an added perk for existing clients and a means to draw in new customers, even those who would prefer to do the actual design on their own. With stay-at-home orders a feature of life for months now, McFadden is betting there are enough customers out there who have taken a long look at their homes’ decor and would like a change.

The showroom will be staffed by the firm’s employees or collective members on a rotating basis. Flourish Spaces is a five-person shop.

“That’s an easy extension to make in our business plan,” she said.

Patrons generally won’t walk out the door with their purchases, rather they will order them for a later delivery. Flourish Spaces will generate revenue through the showroom with membership fees and a cut of sales. Arrangements vary based on a given member’s use of the space.

The Flourish Collective will be located on the ground floor of 221 E. Clay St. That space was formerly home to Flourish Spaces, which has moved upstairs. McFadden bought the property with her cousin in April 2018.