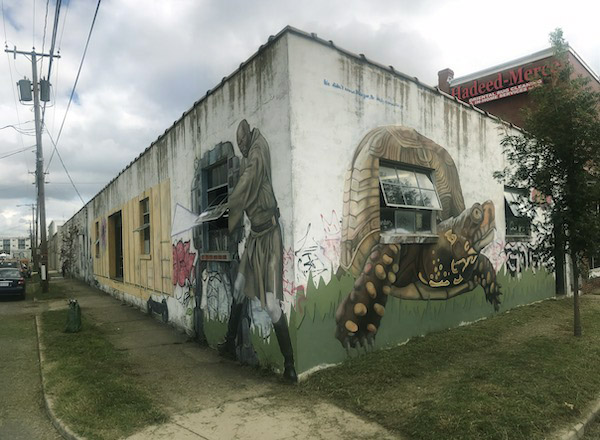 The one-story building, complete with murals of Mace Windu and a tortoise, stands at the corner of Highpoint Avenue and West Moore Street. (Photo by Mike Platania)

Even the pandemic-induced downturn isn’t stopping firms from paying a premium for Scott’s Addition real estate.

Jeffrey Wall, whose metal fabrication firm Wall Sheet Metal operates out of the 75-year-old building, was the seller in the deal.

Clachan Director of Operations Lindsay Lewis said they’re not able to share what their plans are for the building, adding that the deal included a lease-back to the metal firm for what could total 10 months.

The deal closed Aug. 31 and amounted to $165 per square foot. One South Commercial’s Tom Rosman and Justin Sledd represented Wall in the deal.

The purchase is Clachan’s second foray into Scott’s Addition. Last summer it bought the Ambience Lofts at 1716 Summit Ave. for $4.8 million. The 17-year-old firm owns and manages more than 500 units, most of which are near VCU.

While many projects in the neighborhood have continued to go vertical this year, land deals in Scott’s Addition have been quieter than in years past.

In June, Bonaventure Realty Group, which bought the Scott’s Edge apartments, snagged a nearby half-acre lot for $500,000.

On the southern end of Scott’s Addition, an unnamed buyer is interested in the Hofheimer Building at 2816 W. Broad St., while a 7-story apartment building is being planned to rise next door.

It will be interesting to see if they build an apartment building there, or what they do, as it will give a hint as to what will happen to small parcels in Scott’s addition going forward