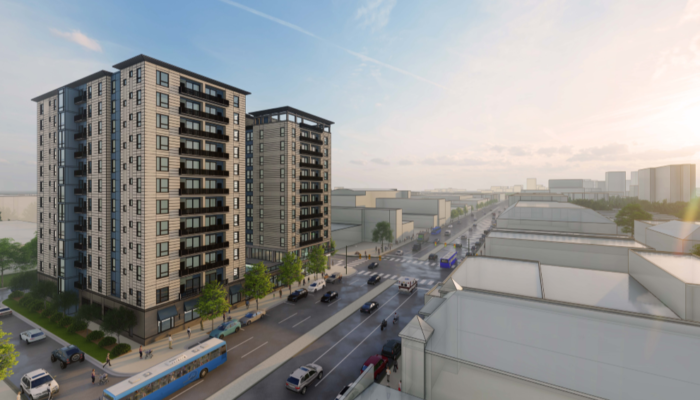 A $2.9 million deal has a Minneapolis-based developer ready to dig into a sizeable apartment project on West Broad.

The seller in the deal was Noephel Inc., an entity registered to Midlothian’s Shakil Rehman. The property was most recently assessed by the city at $598,000.

A recently-closed Sunoco gas station and convenience store currently sit on the site, and will be razed soon, said Ben Angelo, senior director of real estate at Opus. 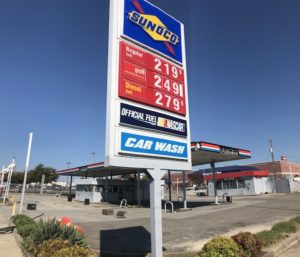 A former gas station and convenience store will soon be razed on the site. (Photo by Mike Platania)

“You’ll start to see real changes over the next couple of weeks but you probably won’t see vertical improvement for a few months. That’s because we’ve got to dig a big hole for parking,” Angelo said, referencing the project’s underground parking deck totaling 77 spaces.

Opus’ plans for the project were approved about a month before the pandemic hit Richmond.

Alabama-based Rabren General Contractors will handle construction on the project, and Angelo said they’re anticipating hiring around 15 to 20 subcontractors, all of whom will be Richmond-based.

Despite the economic reckoning that has followed, Angelo said Opus always believed in the deal and wanted to keep moving forward on the project, the total cost of which he declined to disclose.

“It was a little uneasy from mid-March through July just: A) trying to keep the deal together, and B) making sure we still had a lot of confidence in the opportunity to develop in Richmond,” he said. “It was probably late July or early August where we felt comfortable enough to move forward.”

Angelo said Opus, with a portfolio of roughly 200 projects completed nationwide, would consider future projects in the Richmond region if the right opportunity arose.

“Given the nature of where we’re at and what the world’s going through, we’re in ‘Take it one step at a time’ mode,” he said.

While Opus is preparing to add retail space to the neighborhood on the tower’s ground floor, another 11,000-square-foot space across North Lombardy recently became available.

The Dollar Tree at 1510 W. Broad St. closed in recent months and is now listed as available for lease, with Thalhimer’s Alex Wotring as the listing agent. Dollar Tree had operated there for over 10 years.

Congratulations and cheers to a prosperous development.

I have been curious about the vast amount of available retail space as a result of these mixed use projects. After years of unleased commercial space sitting at the ground level of all of these nee developments, are there any creative ideas for how to get these spaces used and productive?

commercial space vacancy was not a big issue for landlords prior to Covid-19 but that disease changed everything. Then Broad Street became a focus during the BLM demonstrations and the resulting damage from vandals and looting by criminals chased out some of the surviving tenants. Occupancy will rebound when we get a handle on the virus by next summer.

I beg to differ Bruce. The majority of our commercial space in new mixed use projects in the City have been vacant since they were built.

Yes, I second that. When I was exploring a mixed use redevelopment on Grace Street 7 years ago, my Realtor told me he wouldn’t take a listing for 1st floor commercial space. He said there were over 150 similar vacancies in Monroe Ward alone, and that it would be a tough spot to fill and keep filled. Now things had gotten better since then, but they have definitely taken a turn for the worse this summer. Time will tell how quickly they bounce back, but the boarded-up downtown has lost some luture. This particular development has a better shot than… Read more »

Monroe Ward and Jackson Ward maybe, but it seems like the new projects in Scott’s and Manchester fill up pretty fast on the ground floor. Scott’s View, Scout, Nest, City View Marketplace, Locks Tower, Hill Standard all have some signed commercial uses for ground floor space. I think most commercial slots in ground up new mixed developments in the city over last 3 to 5 years have been filled. Will be interesting to see how Carytown Exchange project fills in.

I don’t know, but majority seems overstated? That said, if there is enough residential that is underserved nearby, commercial will open to fit the needs.

It may be that Richmond commercial space is overpriced relative to the fundamentals, of course. But if we do a thought experiment, I bet we would see all the space filled at a $1 a foot. The extent it’s not being filled tends to indicate a market correction is needed/in the offing

Broad Street suffered from Pulse construction dragging out long before that. Businesses left when they couldn’t get customers to their doors by car or bus.

I think the only retail you see in these places that are a success are either a bar or restaurant that is small enough to have a decent business from the building tenants and surrounding neighborhood or a service business like a hair salon, dry cleaner etc. I don’t think you see many examples of retail shopping, offices or other commercial tenants in most “mixed use” buildings.

I’m encouraged to see more underground parking for the apartment buildings. That’s a sign that land has become too valuable to waste on surface parking and ugly parking structures. Broad Street appears to exploding with apartment building growth. However, approximately 1 billion dollars of new development is tied up in the city’s planning review, permitting and inspections departments because of chronic staffing problems that harken back more than a decade. Resolving that issue, which is required by law, would free up about $15 MM in revenue annually to the city’s coffers which could be used to resolving public school, mental… Read more »

I hope the entrance to Lowes off of Lombardy isn’t permanently closed because of this development, or even for the entire duration of construction. Right now, it adds a bit of a bottleneck to that area, and visitors are forced to drive around the block to get access.

good location. Much better than having a gas station there