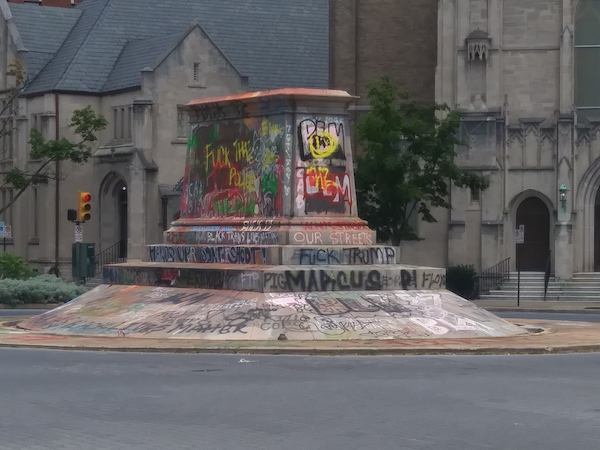 The empty pedestal of the J.E.B. Stuart statue on Monument Avenue in early July. A grassroots campaign overseen by a local nonprofit to cover the costs of the removal of the city’s Confederate monuments recently ended with about $45,000 raised. (Jack Jacobs photo)

A local grassroots effort that had hoped to help cover the city’s costs associated with the removal of Confederate monuments has fallen short.

The Fund to Move the Monuments formally ended its fundraising efforts last month after gathering $45,000 in donations. The initiative kicked off July 1 and was originally framed by its organizers as a means to fully cover the $1.8 million that Mayor Levar Stoney’s administration spent to remove the divisive city-owned monuments this summer.

The funds raised will be transferred to the city by ordinance, which the City Council will consider at a future meeting.

The Maggie Walker Community Land Trust is the transfer agent for the fund, which was thought up by local real estate agent Shannon Harton.

“We are currently working with (the Department of Public Works) to initiate an ordinance to accept the money and appropriate it to the DPW FY2021 general fund budget as a partial offset to monument removal costs,” Lauren Lafayette, Maggie Walker Community Land Trust board chairwoman, said in an email.

Harton and Lafayette didn’t respond to a request for further comment Friday afternoon.

During a City Council meeting on July 1, Stoney said the $1.8 million needed to cover the work was available in the city’s public works department budget. He also referenced “the private philanthropic effort going on to raise dollars to cover the costs to the city,” referring to the Fund to Move the Monuments.

Stoney spokesman Jim Nolan said last week the mayor’s plan to remove the monuments was not dependent on the fund’s success.

“The administration appreciates the efforts of all involved, but it should be understood that the administration’s action to remove the monuments July 1 was taken by the mayor in his capacity as emergency management director in the interest of public safety, and was not predicated on the intention or expectation that it would be financed through private donations,” Nolan said in an email.

Relying on local emergency powers and citing an urgent public safety need, Stoney awarded a contract that resulted in the bulk of the city-owned Confederate monuments being taken down and sent to storage. Those included the Monument Avenue statues of Stonewall Jackson and J.E.B. Stuart. Others were toppled by protestors, most notably the Jefferson Davis statue on Monument Avenue.

The closing out of the fundraising efforts comes as Stoney continues to face scrutiny over the monument removal contract, which was awarded to an entity linked to one of the mayor’s political donors. Questions — mainly from Stoney’s mayoral election rival, Councilwoman Kim Gray — have led to a Richmond Circuit Court judge appointing a commonwealth’s attorney to investigate the contract’s legality.

Stoney has said in several news reports that the firm, tied to Newport News-based Team Henry Enterprises, was the only one willing to take on the work given its hot-button nature.

Meanwhile, the state-owned Robert E. Lee statue on Monument Avenue continues to stand as a legal battle continues regarding its removal. That case has a hearing scheduled for Oct. 19.

Regardless of your stance on the monuments Richmond City taxpayers should be enraged by this continued pattern of egregiously wasting taxpayer money. This was not an intricate process carried out by preservationists. A crane, flatbed trailer, and empty field at the wastewater treatment plant should not have cost the taxpayers of Richmond City 1.8 million dollars. Does this 1.8 also include the future removal of the pedestals or will that contract be awarded after Stoney’s donor honey jar runs dry?

I mean that sounds good but where are the facts backing it up? What companies do you know of, what information do you possess that goes beyond Stoney-bashing (a popular sport to be sure) regarding entities that would take down the monuments for less and how much? Anyone who was there or has seen the video from the removals knows its much more than a crane & flatbed trailer. Some of them were removed in the midst of protests, counter-protests, armed citizens and police. An old CNN article from 2017 said it cost New Orleans $2.1MM to take down 4… Read more »

This was political grandstanding with tax payer money.

And Stoney takes the extra 1.5 million from his little slush fund and launders it through our inner city methadone clinics. Then he takes that money and pumps it right back out to PBS and pro abortion super PACs!