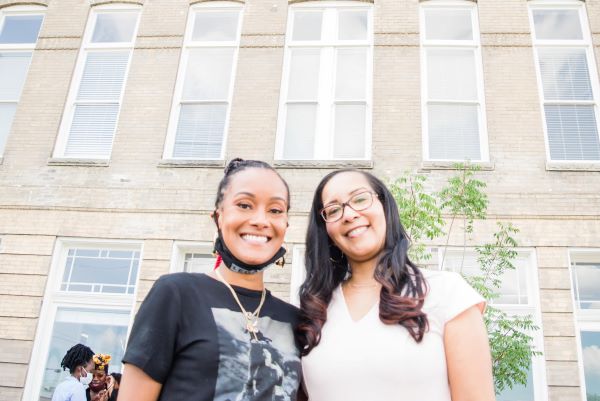 Fresh off its rehab and conversion to a mixed-use structure, the St. Luke Building at 900 St. James St. has its first commercial tenant in place.

The center plans to also offer A Renewed Legacy Senior Care, a home-based health care service for the elderly. It is currently in search of an administrator to run that program, CEO Korinn Carter said.

New Legacy was founded in 2017 and outgrew its former space at 206 E. Clay St. Korinn Y. Carter Enterprises Inc. manages the for-profit New Legacy, and other programs based in the center. Certified Scholars, run by Ceonna Samuels, provides the education and virtual learning support offering for the center’s programming.

New Legacy rates are determined by insurance carriers. The day care service offers a weekly tuition rate that ranges from $200 to $250 per week, based on parents’ income. The center’s childcare services also include an after-school program that costs $100 a week. Carters said the center is actively seeking funding support to provide lower rates to families in the Jackson Ward community.

Five children are enrolled in the child care program. There are 100 clients served by New Legacy, Carter said.

The center is a means to serve and advocate for minority families in the Richmond region. As such, setting up shop in the St. Luke building is more than a chance to grow the organization, but also pay homage to Maggie Walker, who was the first woman to open and serve as president of a chartered bank in the United States.

“It’s an indescribable feeling of honor and gratitude. We are both honored to be able to build our legacy in the building Maggie L. Walker built many of hers. We are beyond grateful for the opportunity to do so, and we’re taking the responsibility seriously to create something positive, long-lasting, and impactful for our community,” Carter said.

The center opened at the St. Luke Building in July. Kia Johnson of Beautiful Morning Home Decor designed the space.

As New Legacy looks to add to its client base, Carter said that being a minority-owned enterprise that serves minority clients gives it a leg up on other providers who may not have the same background as those they’re serving.

“We provide an environment where our young people are nurtured, developed, and educated by adults who share their same culture and values, as well as provide a space for an increased self-awareness through meaningful relationships,” Carter said. “Cultural competency is about promoting a sense of well-being and finding your ‘place in the world.’ ”

It’s great to see that historic building being reborn. I’m sure Maggie Walker would be proud.