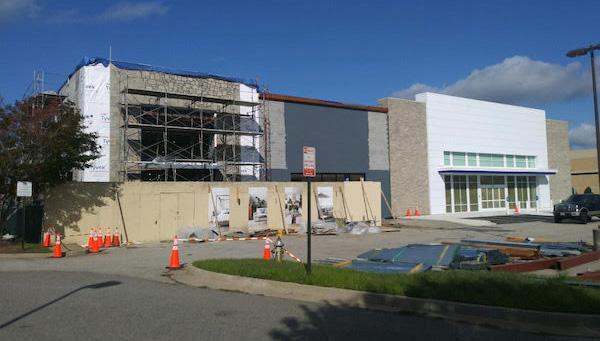 Arhaus will relocate its Short Pump store out of the mall and into a nearby building that it will share with The Container Store. Arhaus plans to open in its new space at 11732 W. Broad St. in December. (Jack Jacobs photo)

When the region’s first Container Store location opens in Henrico next spring, it will have a new neighbor already in place.

Arhaus, an Ohio-based home furniture and decor retailer, plans to leave its current home inside Short Pump Town Center for a space just outside the mall at 11732 W. Broad St., which it will share with The Container Store.

Both sides of the 35,000-square-foot property are under construction, with Arhaus expected to open in early December, according to a spokeswoman for Brookfield Properties, which manages the site for owners Pruitt Associates and QIC. The Container Store is slated to open next spring.

The property was formerly home to an HHGregg store.

Arhaus’s move comes in the aftermath of other retailers exiting the mall. It lost an anchor tenant with the departure of Nordstrom over the summer, and the New York and Co. store also permanently closed this year.

Arhaus is a privately-held chain with more than 70 locations in the U.S.

The Container Store, which is publicly traded, has more than 90 locations across the country, including three in Northern Virginia, according to its website.