The latest rendering of the indoor arena planned at Virginia Center Commons. A six-story hotel, also planned, is visible in the background. (Courtesy of Henrico County)

After hitting the pause button due to the pandemic, Henrico County is resuming its efforts to develop an indoor sports arena.

Henrico supervisors this week approved an interim agreement with local developer Rebkee Co. to proceed with demolition of the county-owned portion of Virginia Center Commons, where the county’s long-desired indoor sports and convocation center would anchor a larger redevelopment of the mall site. 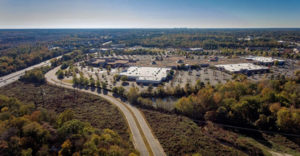 An aerial of the mall site alongside Interstate 95.

The agreement includes design and construction planning for the arena, which would replace the mall’s former Sears building and fill about 25 of the 75 acres’ worth of property that Rebkee plans to redevelop. Henrico will pay Rebkee more than $1.9 million for the work, adding to $50 million the county contributed last year for Rebkee to secure and develop the arena site.

A comprehensive agreement detailing construction of the facility remains to be negotiated, according to a summary of the resolution that the board adopted Tuesday.

Brandon Hinton, a deputy county manager overseeing the project, said that agreement is anticipated next year, with the goal of completing the arena in late summer 2022. Demolition would begin next month and wrap up next March.

The arena was among capital projects that were put on hold during the county’s response to the pandemic, which included a reworking of its budget for the current fiscal year. Hinton said better-than-anticipated revenues since then and market conditions made it favorable to now proceed with the project.

“We’ve been collecting revenues better than our worst-case scenario that we budgeted for, we are seeing some economic growth in the community, and frankly, this is a project that is a priority of the board and certainly the county manager,” Hinton said. “It’s one that has long-term, positive impact, and we wanted to move ahead and see where we are.”

The county is planning a roughly 215,000-square-foot arena that can accommodate basketball, volleyball and other indoor sports, to capitalize on the county’s steady sports tourism numbers. The facility also would host high school graduations, currently held at VCU’s Siegel Center in the city.

Hinton said Rebkee is looking for a developer for the arena project. Schematics shared with the board show the facility would include a dozen NCAA-regulation basketball courts, twice as many volleyball courts, 115,000 square feet of event space, and convocation seating for more than 4,500 people, among other features.

Plans for the larger redevelopment of the mall site were announced late last year. Rebkee is working with Shamin Hotels to rework the property with a hotel, retail and entertainment uses, and a residential component with some income-based housing. Rebkee’s proposal for the arena was selected over two others submitted by other firms. 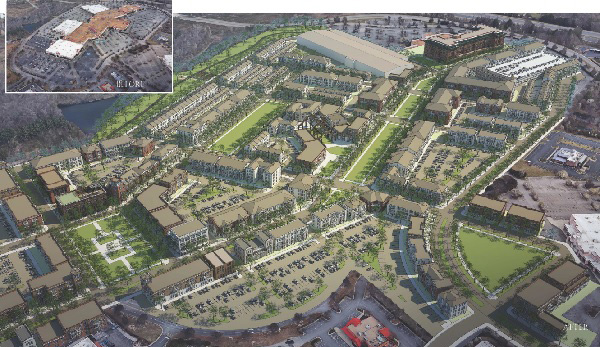 Rebkee principal Rob Hargett told the board Tuesday that the firm is under contract to purchase the former J.C. Penney building, adding to the main mall building and separate Sears and Macy’s buildings that the firm purchased in January for upward of $12 million. The project does not include the American Family Fitness building, which remains separately owned.

Shamin’s hotel would rise six stories at the easternmost end of the mall site, alongside Interstate 95. That portion of the property was put under Shamin’s ownership the same day the other parcels were purchased, county property records show.

Hargett also told the board that plans are in the works for a first phase to consist of 55 townhomes. A rendering of the project shared with the board shows rows of multifamily housing filling the bulk of the mall site.

Rebkee is involved another mall transformation at Regency, which it is redeveloping with Thalhimer Realty Partners. That project also includes an indoor sports component, with NOVA Aquatics’ planned $18 million facility there.

In other business Tuesday, the board approved several rezoning requests for projects on opposite ends of the county. 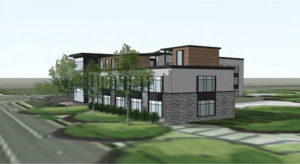 In Varina, Sauer Properties’ request to rezone 226 acres it owns south of Richmond International Airport was approved, clearing the way for an industrial distribution development. The property, which straddles South Airport Drive immediately north of Pocahontas Parkway, is to be combined with adjacent areas under Sauer ownership that are likewise zoned for light industrial use. 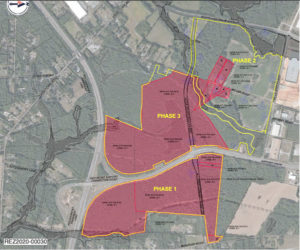 And closer to Virginia Center Commons, Stanley Martin Homes and Wilton Acquisition LLC secured zoning and permit approvals for a 141-home residential development on 32 acres north of Scott Road between Interstate 95 and Aberdeen Street. The project, to consist of 67 townhomes and 74 houses, is just south of the site of Stanley Martin’s ReTreat at One development, approved last year for 500 homes east of Brook Road.

How will this affect existing businesses around the site, like the restaurants, the Office Max, and the movie theatre? This is just for the mall building? Everything else will be left alone?

Also, Bizsense, we’re still looking at tiny pictures. Can you get this CMS you use to allow for larger images, they’re not even worth clicking on? I really want to enjoy the pieces your staff works so hard to produce, but we can’t see a larger view of the image

Trending data on youth sports growth in the U.S. over the past, several years shows an ability to host ice hockey tournaments would be a very wise move here, Henrico: https://www.leaguenetwork.com/2018/09/which-youth-sports-are-on-the-rise/

What about a concert venue?