The clubhouse at The Country Club of Virginia’s James River Course, which is the hub of the PGA’s bubble for the Dominion Energy Charity Classic tournament. (BizSense file)

As a private, members-only institution, The Country Club of Virginia is used to operating within its own sort of bubble.

But the precautions and pandemic-induced restrictions required for this week’s Dominion Energy Charity Classic at CCV’s James River Course are a whole different ballgame.

The club, along with PGA Tour Champions, have worked to create what they refer to as a “bubble” to keep all involved in the 54-hole tournament safe, including its roster of high-profile players such as Bernhard Langer, Vijay Singh, John Daly — and for the first time this year — Phil Mickelson (all age 50 or older).

That means a noticeably different setup than the tournament’s previous four years at CCV, with the most evident change being the absence of spectators. That decision was made in July.

“The bubble that was created by the PGA was something we’ve had to get used to,” said Anne Stryhn, CCV’s assistant general manager. “It was a disappointment not to have spectators but, ultimately, it was the right decision. We’ve just had to think creatively and be flexible and try to make sure everybody is kept safe and healthy.” 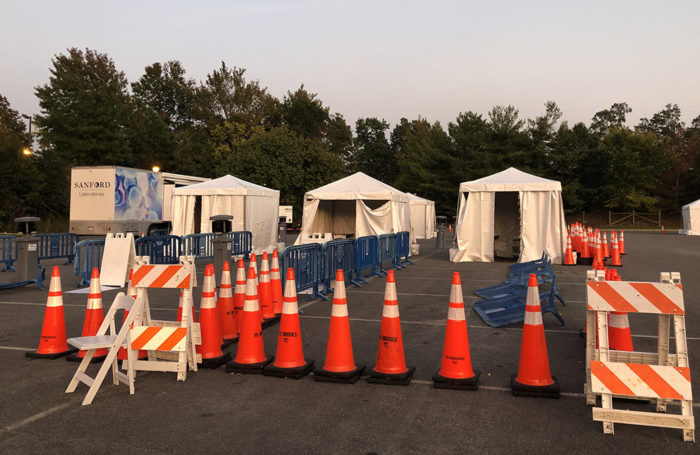 The fifth annual tournament’s usual flow of people around the grounds of CCV has been forced to change course, such as where and how food is served to the players and caddies.

“Service patterns have changed in terms of where our staff could go,” Stryhn said. “In terms of going from point A to B, we’ve now had to get to point B by way of Point X, Y and Z.”

And there are far fewer staff and volunteers than in years past. The DECC normally utilizes around 1,200 volunteers, but that’s down to a dozen or so around the course. CCV staff working the tournament within the bubble is around 65, with more outside the bubble.

Miller Brady, president of PGA Tour Champions, said preparation for the tour’s bubble began almost immediately after COVID-19 arrived in earnest in the U.S. this spring.

“When COVID hit and became a reality, we quickly were shut down. We immediately started looking at when and how are we going to be able to play again.”

The organization leaned on its tour doctor, enlisted the assistance of infectious disease specialists and began crafting what became the guidelines for the bubble it has instituted at each of its last eight tour stops since play resumed this summer.

A key to its preparation is testing — lots of testing.

Players must first submit an at-home test prior to the tournament. If negative, they head to the given location and are tested offsite away from the host course (in this case at a location off Gaskins Road). Once, and if, they receive a negative result, they get their credentials for the week and are allowed into the bubble, which essentially is in and around the CCV clubhouse.

The course itself is technically not in the bubble, though there are protocols about keeping distance from others.

Caddies and pro-am players also are tested. The pro-am is a big selling point for Tour Champions events, giving their biggest sponsors the chance to play for two days along side the pros. 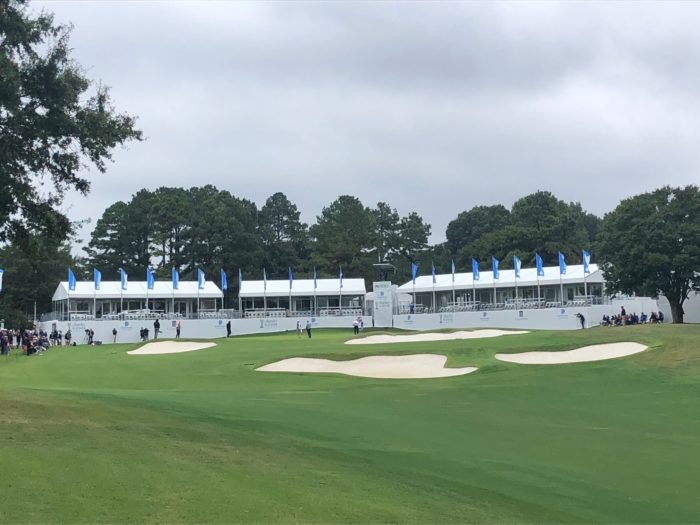 There will be no grandstands as in previous years, shown in this file photo. (BizSense file)

All involved go through thermal screening each day during the tournament and answer the usual COVID-related questions we’ve all become accustomed to answering.

Players’ movements around the club when not playing are vastly different this year. All food is grab-and-go. In the evenings after the day’s play is over, players are asked not to go out and about in a given city. That means they stay in their hotels or RVs. Brady said more players this year are opting to travel by private RV than in normal years. Some, like John Daly, are known to travel by RV even in non-pandemic times.

Over the course of eight tournaments, two players have tested positive at home prior to an event and one — Mark Calcavecchia — tested positive onsite in Sioux Falls, South Dakota and was quarantined.

The lack of spectators and food and drink sales has had an effect on the DECC’s bottom line, Brady said. But its main Richmond-based sponsors, including Dominion, Markel and Riverstone Group, and other smaller level supporters are still on board.

The tournament puts a week-long pause on what’s otherwise been a busy year for CCV. Like many golf clubs, CCV’s two courses have been part of the pandemic trend that has shown golf to be a socially-distanced respite for many. 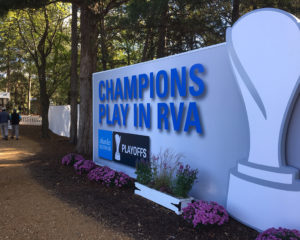 Many of CCV’s 7,600 members also have taken to pickle ball, another outdoor activity, in increasing numbers.

“I heard a stat recently that pickle ball at CCV was up 600 percent,” during the pandemic, Stryhn said.

In the end, Stryhn said the most difficult thing to deal with this year was having to inform CCV members that they couldn’t be spectators of what is the most high-profile field of golfers the DECC has had since its inception — Mickelson being the headliner this year.

“Overwhelmingly, the members support the tournament and it is a point of pride. Anybody who does much with golf thinks it’s pretty darn cool that Phil Mickelson is out here playing,” she said.

As for who got the coveted honor of pairing with Mickelson in this week’s pro-am — it turns out it pays to be the presenting sponsor. That duty went to Dominion CEO Tom Farrell, Brady said.

The tournament’s first round begins today and runs through Sunday. The purse is $2 million. The DECC is part of the tour’s playoffs, which has two more stops, including the Schwab Cup Championship in Phoenix beginning Nov. 6.

Last year’s winner of the DECC was Miguel Angel Jimenez.