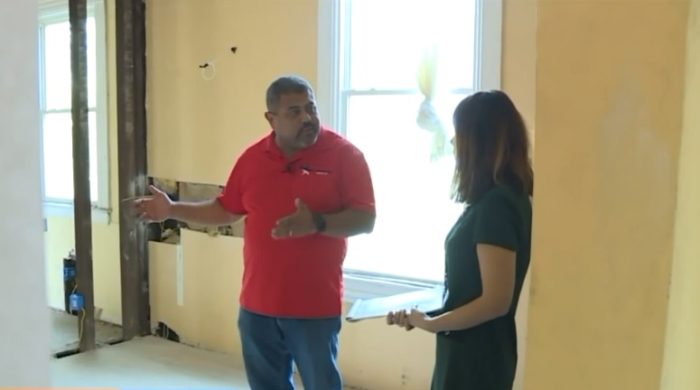 Moe Mathews at the Veterans Path Up house in a CBS 6 report in 2017. (CBS 6 footage screenshot)

Disputes with investors over unfinished projects and unaccounted-for funds have landed a local real estate agent and house flipper in legal hot water.

Moe Mathews, co-owner of Rockville-based brokerage Fresh Start Team, is facing two civil lawsuits and at least as many state-level investigations stemming from property rehabs that investors say were not completed according to their contracts.

One of those properties, a house in Richmond’s Northside, was planned to serve as transitional housing for homeless military veterans through a since-dissolved nonprofit called Veterans Path Up. The local chapter was led by Mathews, a former U.S. Marine.

The house was sold in a short-sale earlier this year when investors learned that work on the project had stalled, said Joy Oberholtzer, one of the investors.

“Little if any work was done on the house,” said Oberholtzer, who is based in Arizona. “There seems to have been no veterans who benefited from this house other than Moe Mathews.”

Two other investors, Jennifer and Rob Flick, are suing Mathews’ Fresh Start Property Solutions LLC in a pair of lawsuits filed in Hanover County Circuit Court. The suits, which involve three other rehab properties, allege that Mathews misrepresented work being done and couldn’t account for funds drawn when asked for his books.

Mathews, who has been active in real estate locally for over a decade, contests the allegations in responses that were filed with the court as recently as mid-September. He also is countersuing the Flicks, asking a judge to dissolve an LLC they created as a joint venture on one of the properties: a commercial building in Dinwiddie County that was planned to become an assisted living facility. 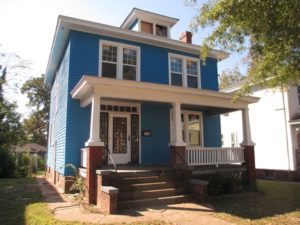 Two other properties involved in the Flicks’ lawsuits include an unfinished house rehab at 515 Bancroft Ave., also in Richmond’s Northside, and a residential property in Powhatan County at 3733 Old Buckingham Road.

All three properties remain in Mathews’ ownership or control: the Bancroft and Powhatan houses under his Fresh Start Property Solutions LLC; and the Dinwiddie property under the joint venture with the Flicks, an entity called 21723 Boydton Plank Rd LLC, named for the property’s address.

Mathews did not return messages seeking comment for this story. Charles Inch, a local attorney for Mathews who is not representing him in the Hanover cases, said Mathews did not want to engage in a back-and-forth that could make matters worse, but he provided the following comment in regard to the Flicks’ suits:

“My client is a business owner and always wants to do best by his clients, and he’s disappointed that this situation has turned out the way it has,” Inch said. “He wishes no ill will toward the Flicks and just hopes that it can be resolved in everyone’s best interest.”

In their suits, the Flicks, who are based in Arizona and Puerto Rico, allege that Mathews breached their business agreements by reporting to them that their projects were progressing, when photos taken of the properties earlier this year showed a different story.

The Flicks, through variations of their Wyoming-based Common Cents Solutions Inc., provided funding for Mathews to take out loans and begin renovations on the properties, according to the suits. They provided upward of $122,000 in gap funding to cover Mathews’ closing costs and start work on the Bancroft and Powhatan projects, and wired $405,000 for Mathews to acquire the Dinwiddie property and $650,000 to start that renovation.

The suits claim that Mathews’ reports on the projects contradicted correspondence from his wife and Fresh Start co-owner Catherine, who had told them work was progressing on the projects and invoiced the Flicks for more funds for the Dinwiddie project.

Mathews had said work on the Bancroft house was complete in late January and a buyer was lined up, but photos showed that house and the Powhatan property remained unfinished and “in disrepair,” the suits state. 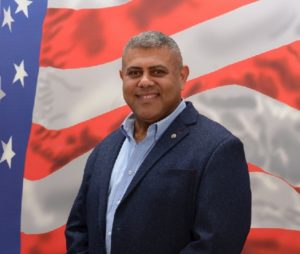 In his answers to the suits, Mathews denies that Fresh Start entered into a joint venture agreement with the Flicks on the Bancroft and Powhatan properties, alleging that the Flicks never signed and returned their contracts. He also argues that progress reports to the Flicks were based on third-party contractors, and that Mathews mistook the Bancroft house for another property when he said it was finished.

Mathews’ responses also take issue with the photos of the properties, contending they are poor quality and do not accurately reflect the properties’ conditions at the time. With the Dinwiddie project, he said the Flicks failed to provide funds as stipulated in their agreement and maintains that he and Fresh Start have done nothing wrong.

Mathews is represented by Curtis Gordon and Bennette (“Ben”) Sharpe IV of Henrico-based Dankos, Gordon & Tucker. Gordon and Sharpe did not respond to requests for comment.

The Flicks are represented by Sherry Fox and J. Buckley Warden IV of Richmond law firm ThompsonMcMullan. Warden said the case, filed in May and July, remains in the discovery phase and attempts to acquire documentation for what Mathews did with the Flicks’ money has so far not been productive. He said a motion to compel evidence could be forthcoming as a result.

‘Not the only people to have called’

Warden said he and Fox have been contacted by other parties with allegations against Mathews who likewise want them to take up their cases.

“The Flicks are not the only people to have called and have asked for an investigation and/or lawsuit into what Moe Mathews did with their money and have been unhappy about it,” Warden said in a recent interview, adding that those calls have come from both local and out-of-state investors.

“Because of the nature of the kind of claims that they are, and because of the suspicion that Mr. Mathews does not have everybody’s money, I’ve been unwilling to take on more than one of this kind of case against Mr. Mathews at a time,” Warden said.

It’s unclear how many properties Mathews and his various business entities have had their hands on locally over the years. Warden said he didn’t know a specific number but called the amount “substantial.”

In Richmond alone, city property records and land deeds show Mathews’ entities have sold about 10 properties since 2014 and currently own at least a dozen. The State Corporation Commission lists a dozen business entities tied to Mathews’ business office, most of those variations of the “Fresh Start” name.

Court records show that two of those entities each has an active lawsuit against it. One of those lawsuits, in Henrico County, dates back to 2015 and involves a house transaction in which Mathews’ Fresh Start Realty LLC was the listing agent. The latest filing in that case, which alleges negligence and conspiracy with a contractor to commit fraud, was entered into the court in February.

House for veterans sold off 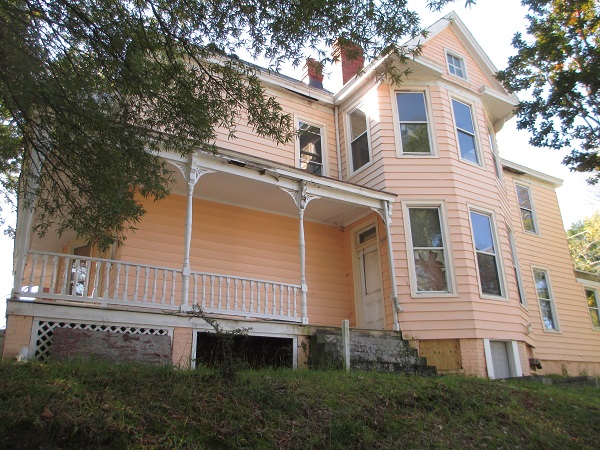 The house at 2006 Lamb Ave. was planned to serve as transitional housing for homeless military veterans. (Jonathan Spiers photo)

Another investor going after Mathews is Oberholtzer, who said she is one of 10 investors who provided funds to Mathews for the Veterans Path Up house, which was highlighted in a CBS 6 News report in 2017.

Oberholtzer said the group invested $200,000 in the house, which is located at 2006 Lamb Ave. in Barton Heights. When the group stopped receiving monthly interest payments on the loan it took out for the project last November, she said they investigated to find that work on the house had not been done as Mathews had conveyed, prompting the group to sell the house to try to recoup funds.

Oberholtzer said she has filed complaints against Mathews with the Virginia Department of Professional and Occupational Regulation, and with the Attorney General’s office, leading to one of at least two investigations into Mathews launched this year by the SCC’s Division of Securities and Retail Franchising. The division is looking into potential violations by Mathews of the Virginia Securities Act, according to documents obtained by BizSense confirming the investigations.

Oberholtzer said her investors group has not filed a legal case against Mathews due to challenges getting all of its members on board.

“This gentleman has damaged a lot of people,” Oberholtzer said. “I do not believe it is just me and my group that has been injured by this party. (There are) contractors that have not been paid.”

Veterans Path Up, which was based in Charlotte, North Carolina, was in the process of being dissolved late last year after Charlotte station WSOC-TV reported a complaint to the North Carolina AG’s office alleging improper bookkeeping and poor documentation of donations against the nonprofit.

Mathews helped expand the nonprofit to Richmond, launching a local chapter in 2017 and serving as its executive director until last December, according to a LinkedIn profile attributed to Mathews that appears to have been taken down in the past week.

Mathews also ran a “We Buy Ugly Houses” franchise that ended in December after nine months. Ariel Herr, a spokesperson for the brand’s parent company HomeVestors, said the company and Mathews agreed to part ways due to issues with Mathews’ business practices. She declined to offer specifics.

“When Moe first joined HomeVestors, it was the right structure and a good fit for him to learn the business. Over time, however, Moe developed his own business system that no longer fit with the HomeVestors’ structure, systems, and standards,” Herr said in an email.

“His system also was in conflict with his fellow franchisees and HomeVestors’ customers, and was generating complaints,” she said. “We and Moe mutually agreed it was the right time for him to leave.”

Mathews’ businesses also are linked to a networking group called Richmond Real Estate Investors Association. The group is not affiliated with National REIA despite a similar-looking logo on its website, which lists an affiliation with Think Realty at the bottom of the page. National REIA’s website lists only one local chapter: Midlothian-based Chesterfield REIA.

Attempts to reach National REIA to ask whether Mathews’ group was ever affiliated were unsuccessful.

Mathews’ group lists the same address as his Fresh Start Team office: 15430 Pouncey Tract Road, at the intersection of Pouncey Tract and Ashland roads near Wyndham. The office previously operated as Fresh Start Realty and is now affiliated with eXp Realty. A LinkedIn page for the company says it has more than 25 agents.

Awful. When greed becomes all consuming nothing good happens.

It’s a shame Richmond continues to be home to individuals and companies whose simple greed allows them to continue the scheming and scamming that has been prevalent over and over again for many years. The names Clyde Pitchford, Eric Freelander, Baron Otto Von Bressendorf, Lyons Capital, Nicole Hathaway, Darrel and Cynthia Underwood, Robert Wilton, Don Lacey, David Silver, Justin French, Billy Jefferson, MGT Construction, Josh Romano (Cobblestone Development) and Bobby Hicks of Bobby and April all come to mind. It seems to always be a variation on the same theme…….and eventually, they are all discovered, and those that have trusted… Read more »

What’s even more a shame is the lack of penalty imposed on these people by our courts. Last I heard Romano was doing the same thing somewhere else to get another batch of unsuspecting schmucks and most every case mentioned in the comments involves a scammer who blames everyone else but themselves. Truly due to a lack of penalty for anything but the bare minimum. I must say MGT takes the cake. Cooks the books, gets caught and their defense is “we should not be found guilty because of the fact that our in-house accountants failed to expose our crimes… Read more »

Hicks owes me a lot of money, and has made no attempt whatsoever to repay it. A real scam artist, the worst kind.