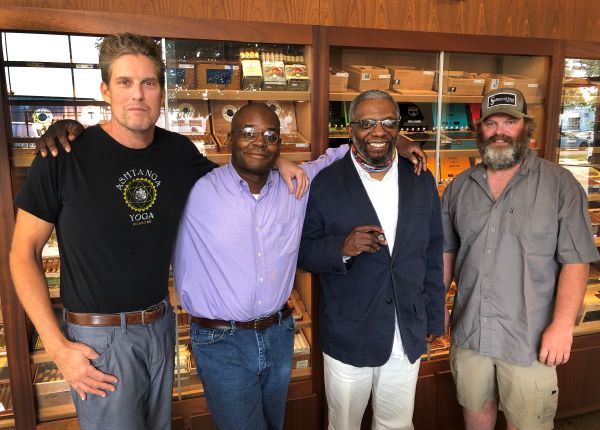 Add a cigar bar to the list of entertainment options in Scott’s Addition.

A leading player in the venture is developer and general contractor David Gammino of City & Guilds, who is a co-owner of the lounge and also its landlord.

The idea for the lounge came about after the closure of the local outpost of Old Virginia Tobacco Co., which shuttered its Carytown space at 3532 W. Cary St. in 2018. Gammino had been a regular there.

“Myself and a large group of people were suddenly without a home base,” he said.

Two former employees of Old Virginia, David Johnson and Nick Hazly, are co-owners of the Scott’s Addition lounge along with Gammino and Tom Gmelch, who is the owner of Method Woodworking and Design in Scott’s Addition.

The lounge will compete for the downtime of residents and workers in the growing neighborhood, which has been a magnet for new residential and commercial development in recent years and is home to an increasing number of entertainment and drinking options.

To that end, the lounge also serves a limited tapas menu and local beers in a bid to expand the spot’s appeal to non-smokers.

The lounge is 1,100 square feet, and Gammino added a patio to the property. He said $200,000 has been invested in the business, with about $150,000 of that for construction. Between the patio and the special ventilation system inherent to the cigar lounge model, Gammino felt confident a lounge concept could be sold to patrons in the age of coronavirus.

“That’s something you do for a cigar lounge anyway,” Gammino said of the high-end ventilator system needed to circulate cigar smoke out of the space. “It dovetails nicely with what the CDC says about the need for air circulation.”

Gammino added that a large segment of the business is retail sales, where customers will pop in to buy a couple cigars and leave.

The cigar venture comes as Gammino sold off a Fan apartment building to pave the way for an upcoming five-story, 60-unit apartment development he’s planning in Jackson Ward.

Man, this is a great idea, can’t wait to stop by!

Its unfortunate that its in the city of Richmond. I would have loved to patronize this business but I no longer patronize any business(s) since the current administration (Mayor/Governor) has ruined the city and feel it is no longer safe or pleasant to visit downtown Richmond.

Scott’s Addition is in downtown now? hmm…I’ll be there. Looking forward to it.

Was in the city limits last I knew

that doesn’t make it downtown. Doesn’t matter though, the original comment was so silly it’s equally silly to nitpick it I suppose.

I’m sure the guys in the cigar lounge will do just fine, to possibly better, without you

I had drinks on the patio of River City Roll this past weekend, there are no riots, no looters, and no boarded up buildings. Go up to the rooftop bars like Kabana and the Graduate, or to neighborhood spots like Penny Lane and The Local. Downtown Richmond is safe, mostly open for business, and I really have to question your motives for spreading comments like this. It’s really hard to fathom anyone who would say this with a straght face has BEEN to Richmond in a year., You just saw a scary report on Fox New once and have been… Read more »

Your are full of crap. Have you been on Monument Ave lately? The atracks on police?The flare thrown through the window of the Starbucks on Robinson? Was your car stopped on Monument by an armed thug? Thugs showing up at a city council persons house at 10pm shooting lazer pointers through the windows? Wake up!

That’s just absurd! so many of my suburban friends believe this, too. Where do they get this stuff?!!The City is just fine.

The city may be fine but there are a lot of people who don’t agree with letting people break windows and paint “F the police 1000’s of times on public property” while the police stand by and watch because it’s too PC to arrest them.

I don’t agree with it either. And the really annoying thing is how many of them don’t live in the city of Richmond, can’t you people in the counties control your riff raff? How do you feel safe given these people spend most of their life in short pump?

Really? Go hang out at the Lee Monument for a little while and see what happens.

Good please stay in the counties, and based on the arrest records from this summer please keep your spoiled vandal children out of our city as well. This our home, not your playground.

Love this spot! I always order a coffee or espresso with my cigar here. Very clean and modern interior; something you don’t see in a cigar lounge. Their outdoor patio is a great place to smoke too!

Last edited 9 months ago by Will Godwin
-1
Reply