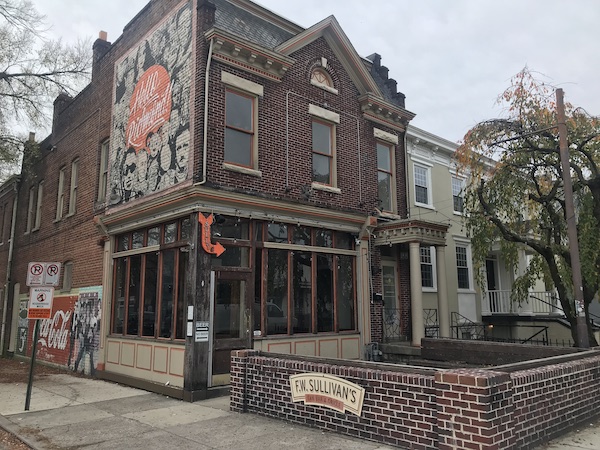 The building that housed F.W. Sullivan’s got listed for sale this week for an undisclosed amount. (Photos by Mike Platania)

Fan bar F.W. Sullivan’s has formally called it quits after 10 years in business — and now its building at 2401 W. Main St. is up for grabs.

Sullivan’s owner Jake Crocker said he’d closed temporarily in March, just before St. Patrick’s Day and when social distancing guidelines were beginning to go into effect. It remained closed since, with its windows still decorated with Irish ephemera up until a few weeks ago. 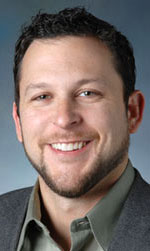 But after about seven months in limbo because of the pandemic, Crocker said he decided to keep Sullivan’s closed permanently.

“We’re known for packing people in and it’s not a big space. We’re a social center and that doesn’t work in the time of social distancing,” Crocker said. “There were a lot of memories made and good times had. It’s fitting a place called Sullivan’s would go out on St Patrick’s Day.” 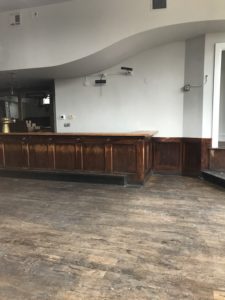 F.W. Sullivan’s had kept its St. Patrick’s Day decorations up since it closed in mid-March. Now, the space has been cleared out.

On the heels of its closure, Sullivan’s building, which Crocker does not own, was put up for sale on Thursday. One South Realty’s Patrick Sullivan and John Innes have the listing.

The 4,400-square-foot building sits on less than a tenth of an acre, with an apartment above the downstairs commercial space. The asking price has not been disclosed, and the parcel was most recently assessed by the city at $757,000.

Per Richmond property records, it’s owned by 2401 West Main Street LLC, which is managed by Quintessential Management Inc., all tied back to other LLCs in D.C.- and Las Vegas. The entities bought the building in 2018 for $880,000. Crocker said he couldn’t disclose more details about the current owners, stating only that they’re from out of town.

Crocker continues to own Lady N’Awlins Cajun Café, which sits across the street and is back open for business. He previously owned a minority stake in Upton Market & Deli, another restaurant on the block that closed last year and was replaced by Moon Rocks Gelato.

With Sullivan’s in the rearview mirror, Crocker’s continuing to operate Lady N’Awlin’s and recently co-founded a marketing consulting firm called Ashelore Brand + Culture. He also unsuccessfully ran for a seat in the Virginia House of Delegates on the libertarian ticket in 2017.

Spent many a Monday night playing trivia there. Food was always good.
Bartenders and waitresses great. Will have to spend Monday nights with
my wife now!

Another business bites the dust due to government hysteria over Covid. When will folks realize that: 1. This is a virus that will not be going away. 2. This is a virus that, for the vast majority, is no more lethal than the flu. 3. Lockdowns and masks are ineffective at controlling a virus. 4. We simply must learn to live with Covid-19. (BTW, “masking” and “lockdowns” are not what I would call “living.”) To quote Tom Woods: “One can live actual human lives — with all the risks and joys that entails — and others can live as moral… Read more »

I have three family members fighting for their lives in the ICU and two daughters working as overwhelmed, terrified and heartbroken nurses right now…your comment is dismissive and ignorant of the reality many are facing. Lockdowns and masks do work- other countries have controlled COVID with significantly lower mortality rates.

Have you seen what is going on in France — you must be referring to the Communist Chinese Party as your model.

Seriously asking: 1-“Steve Richmond” why do you come on here, spread obvious lies, and insult everyone who does not agree with you? Do you think that’s going to change anyones mind? 2-Also, you seem like you’re a pro Trump person, based on saying the virus is the hoax. You do realize that the the GOP has the White house and the Senate, and the Supreme Court? So when you say you are against the government, who are you against, becasuse your side controsl the government now. 3-Tom Woods is some right wing troll wiht a podcast, why do you think… Read more »

I am actually surprised that the math never worked to partially reopen other than not providing carryout-worthy food up perhaps (as a former regular the food was fine, just perhaps not something you would think about when ordering out). Restaurants with patios have been among those fortunate to open earlier and despite the article stating a lack of space, FW Sullivan’s has a decent size front room and a rear room that could be further utilized. Their partner across the street, Lady N’awlins has no outdoor space and a cramped interior and as far as I know they are functioning.… Read more »

Steve Richmond isn’t a real person, just a troll. Small people have to find ways to make themselves feel big, and that is usually by inflaming or intimidating others. Don’t take the bait.

Doing the math for a Hooters location there works. Just saying.