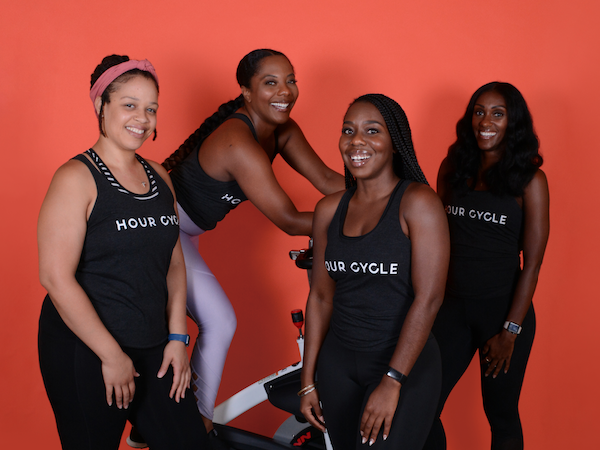 A new gym has pedaled into town with an emphasis on getting more Black participants into indoor stationary cycling.

Hour Cycle Studio opened last month at 715 E. Fourth St., Suite 4, in Manchester. The 10-bike gym was born of founder Jenn Braswell’s experiences during her three years as a cycling instructor, in which she said she observed that the wider world of cycling caters to white people more than people of other races.

“It was clear someone like me wasn’t the target audience,” she said, adding that though her gym caters to Black people, anyone is able to take part in sessions and the gym also has white riders.

Braswell said various aspects of a typical cycling experience, from the workout’s music to the lack of diversity in instructors, created an experience that wasn’t especially welcoming for Black riders. To that end, her studio features Black instructors and makes hip hop music a regular fixture of workouts.

“Music is a big part of why someone gets into a workout and whether someone comes back,” Braswell said.

And it seems to be working. The gym, which has four instructors including Braswell, has had about 450 riders attend a session so far. Braswell said that headcount has proven the demand and she estimated that as much as 80 percent of her riders have been people who have little to no experience in cycling.

“People will come when they feel invited,” she said.

The impetus to start the gym came in April, when Braswell was furloughed from her job as a human resources executive at a New York-based hospitality firm due to the pandemic. Braswell, a Richmond native, worked locally for the company.

“Month one turned into month two, and it was like ‘OK, what are we going to do?”

The change in her job status came against the backdrop of nationwide protests in response to the killing of George Floyd by Minneapolis police in May, which helped spur her interest in creating a space for Black people.

“I was getting frustrated with the response of both my company and the studio I worked at,” she said. She declined to name the entities on the record. “It was time for me to be part (of the solution) I wanted to see.”

She then turned to fellow Black cycling enthusiasts who she had instructed elsewhere and trained them to be instructors themselves in order to build the sort of roster she sought for her gym.

“It’s important to have Black women on the podium,” she said.

As for starting up amid a pandemic, Braswell said a stationary bike shortage made it more of a challenge to outfit her gym, though she was able to line up bikes for opening day.

Braswell said the pandemic gave her gym better footing to compete with other gyms in part by learning from other operators’ pivot strategies created on the fly in recent months. Distancing requirements have decreased the number of bikes larger operators can put out on the floor, making the smaller size of her operation less of a handicap.

“I have 10 bikes in my studio and other studios have 30-plus bikes. But guess what, everybody is operating with 10 bikes right now,” she said. “COVID really leveled the playing field for someone like me breaking into the Richmond market.”

Other cycling outfits in town include Cyclebar in Short Pump, which launched a bike rental program during the pandemic, and Boho Studios, which plans to open a studio in an upcoming mixed-use development anchored by a brewery in Southside.

I love it Jenn!! The class I attended was great! You will see me again soon!