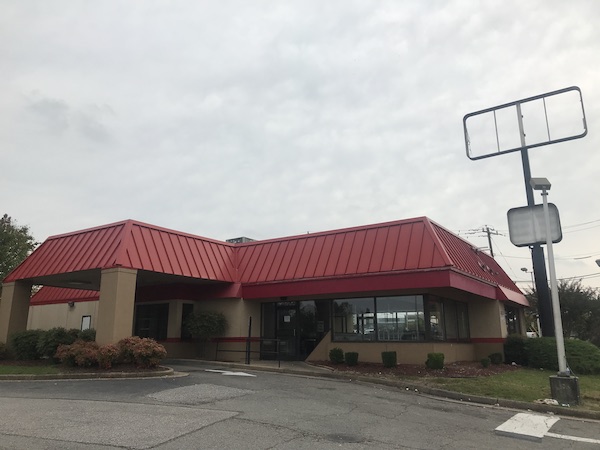 The former Hardee’s near Willow Lawn was sold to Frontier Development for $2.05 million. (Mike Platania photo)

Nearly 40 years of burger flipping has come to an end on a prime piece of Broad Street real estate.

The Hardee’s at 5000 W. Broad St. across from Willow Lawn has closed after the property was sold to Miami-based Frontier Development.

Boddie-Noell Enterprises, the Hardee’s franchisee who operated the location and owned the 0.9-acre site, confirmed the recent closure.

Frontier bought the property on Monday for $2.05 million, per Henrico County property records. It was most recently assessed at $1.3 million.

Frontier owns dozens of properties up and down the East Coast, per its website. Its other local holdings include a former Pizza Hut at 10141 Hull Street Road which it is currently converting into a Starbucks, as well as a stake in the former Carytown Dunkin’ location which closed over the summer.

Attempts to reach Frontier for comment were unsuccessful, but it looks like the firm is planning to raze and redevelop the former Hardee’s site, which sits directly in front of a GRTC Pulse bus station and north of Willow Lawn.

The property is being marketed for lease as a retail or pad site by Thalhimer’s David Machupa and Ed Kimple, with a flyer showing a plan for up to 8,100 square feet of retail, restaurant and office space available in a building that would replace the Hardee’s. The flyer shows Aspen Dental, which has locations in Midlothian and Mechanicsville, as an office tenant.

Hardee’s first opened along Broad Street in 1983. The chain still has 16 locations in the Richmond region, according to its website.

No surprise. The only thing that shocks me is that any Hardees still exist

Try their chicken biscuit. Then you’ll know why. 🙂

or the country ham. it earned a permanent waiver to my health eating plan.

I will miss their fried chicken

Before it was a Hardee’s, it was a Burger Chef for over 10 years

I will miss the friend chicken.

Maybe they can make that GRTC bus stop with bench and cover.

It is across the street from a Pulse stop at Willow Lawn?