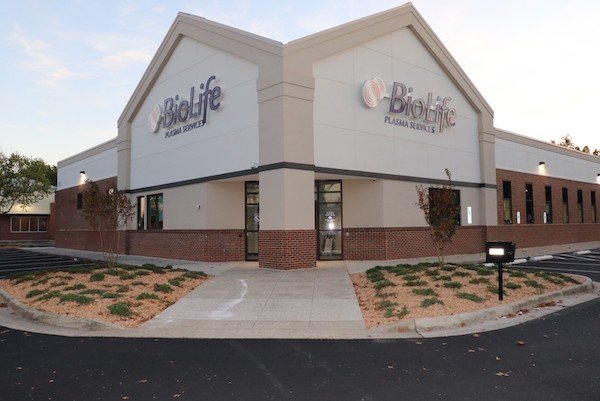 BioLife Plasma Services opened its first plasma collection facility in the Richmond region at 8702 Staples Mill Road in late October. The facility has filled a former Rite Aid pharmacy at the corner of Parham and Staples Mill roads. It is the company’s second location in the state.

BioLife clinics collect plasma that is then used by parent company Takeda Pharmaceutical Company, which is based in Tokyo, in its therapeutics production. Plasma is a portion of blood that helps the body control infection and bleeding. The substance is processed into products used to treat disorders like immune system deficiencies, among other uses.

The 11,000-square-foot Staples Mill facility employs 60 people and has the capacity to extract up to 4,000 plasma samples a week, Richmond center manager Derick Gilkeson said. The company declined to share how much donors are paid.

“As the need for plasma continues to grow in the country, we’re always looking to expand and grow,” Gilkeson said. “We saw a great opportunity in Richmond.”

The company has more than 130 collection sites in more than 30 states. A company spokeswoman said there aren’t any current plans to add more facilities in the Richmond region. It leases the Staples Mill building.

BioLife joins a handful of other plasma collection centers in the region. Among them is a CSL Plasma facility at 5500 Lakeside Ave., which also was formerly a Rite Aid location, as well as an Octapharma Plasma site at 3830 Hull Street Road in Southside.

In other medical sector moves, a Church Hill pharmacy has expanded into pet prescriptions in its bid to ride out the pandemic. MEDARVA Healthcare, which operates two local surgery centers, opened an outpatient imaging center near Short Pump.