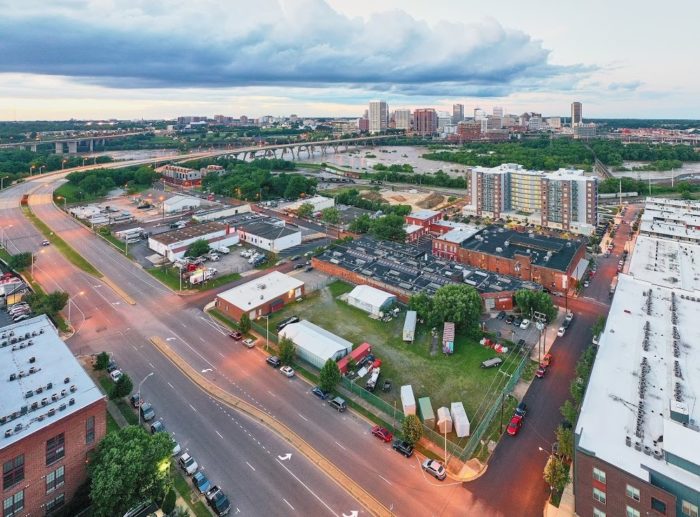 With a planned high-rise apartment and commercial project as the lure, Manchester could finally get its chance to hook a neighborhood grocery store.

A new mixed-use development expected to stand 12-16 stories is in the works at 201 W. Commerce Road, on a roughly 1-acre plot owned by Brent Graves, a former owner of Taylor & Parrish Construction.

While still in the planning stages, the project would look to house 250 apartments and about 25,000 square feet of ground-floor commercial space.

For that commercial space, Graves said his group has been in discussions with a couple grocery store tenants, though nothing’s been finalized. If he is able to bag one, he said it’ll help guide the rest of the project’s design.

“One thing we’ve been focused on over the last six months is trying to identify a grocer as a potential tenant. We want to make sure we get the right one or the best one we can for the neighborhood,” Graves said. “That will really help define what we’re actually going to build.”

The pandemic has disrupted some of those negotiations with grocers, he said.

“There’s one (grocer) that’s based out of town and wanted to come visit the site but they’ve got a travel ban until this virus goes away,” Graves said.

Despite a development boom in the neighborhood, a grocery store has eluded Manchester while the rest of the Richmond region has continued to be seen as a hyper-competitive proving ground of sorts for grocers from all over the globe.

But Graves said the swath of development that’s underway in Manchester may finally help the neighborhood cross the threshold.

“Manchester is starting to reach a critical mass with development so that’s what we’re hoping is going to help draw in a grocery store,” Graves said, citing the thousands of apartments either currently being built or set to be built in the neighborhood.

Graves said it’ll likely be a year and a half before he breaks ground on the project, which would precede 18 months of construction. He’s hopeful that by the time it’s built, the population density in Manchester will more than satisfy a grocer’s requirements.

“That’s the intangible benefit of still being in the planning phase,” Graves said. “We’re looking three years from now. By then we’ll have a much better vision.”

A conceptual drawing for a planned high-rise at Commerce and Porter that could reach up to 16 stories. (Rendering by PSH+)

Commonwealth Commercial’s Kit Tyler and Nash Warren are handling leasing on the commercial space, and Tyler agrees with Graves that the neighborhood looks to be on its way to drawing a grocer.

“The feedback we get on the groceries is that (a store) is something that’s really needed in the area but Manchester is not quite there on the demographics, particularly the number of households in the area,” Tyler said.

Despite selling off his share of the business, Graves held onto the Commerce plot that occupies multiple addresses at 715 Porter St.; 201, 209 and 213 W. Commerce St. and 710 Perry St.

Graves said he’s planning the project as a joint venture with an unnamed local developer. He said he’s currently in the due-diligence phase of negotiating with that developer. Graves also already had the property rezoned earlier this year.

The Graves project would be the latest in a string of high rises topping 10 stories planned for Manchester.

Something new may also be in store for the dormant Southern States silos, one of Manchester’s long-time skyline landmarks. Hourigan Development is planning a mixed-use project at the site of 2-4 Manchester Road. Hourigan’s early drawings for the project show a mixed-use building reaching 16 stories and totaling 575,000 square feet.

And Graves’s Commerce site isn’t the only spot in the city that has caught the eye of grocers. A 5-acre assemblage at East Broad Street and Oliver Hill Way in Shockoe Bottom owned by the Loving family is up for rezoning to potentially make way for a mixed-use development that could bring a new large “food-related” retailer to the neighborhood.

25000 SF is just over half the size of a big grocery store chain like Publix, Harris Teeter or Kroger and only like 1/4 the size of a Wegmans. It would be a perfect size for Trader Joes but after opening a location near Stony Point I doubt that company would double down on south of the river. To a lesser degree that point also holds true for Aldi. So what grocer would people speculate? Another Lidl? The other small format grocers I am familiar with from DC are organic and pricey and would probably go to Short Pump first… Read more »

That Trader Joe’s is still new however, it wouldn’t make sense for them to open another that close. Their 14 other locations, including Short Pump, are fairly spread out. I could see an Aldi or Lidl or something around their size of their buildings coming there. Guess we will wait and see.

Interesting to realize that when you’re talking about a grocery store, even an Aldi or Lidl, if you look at their square footage numbers the total store might be 16-20,000 ft.² but they need 5-6000 ft.² for stock room and refrigerators off the sales floor.

I agree with others; I don’t see Trader Joe’s opening another store that close to one they just opened. Not in this car centric metro area. However I do think people are right and if you read the trades Aldi, especially, is on a store boom trying to become 3rd largest grocer in US.

A street market would be great in that neighborhood

It’s dirty and has no soul…sorry…the truth!

Rooting for either an Aldi or Lidl to come to this area (and have been for years). Outside of super trendy Manchester are numerous working class neighborhoods that would also really benefit from a quality, no frills grocer close by. The closest Aldi is several miles away at Forest Hill and Chippenham.

Actually, both Publix and Kroger (via its Harris Teeter brand) have 20K sf “mini’s” designed for urban communities. Aldi’s store is a bit smaller. Many aren’t aware that Aldi owns Trader Joe’s.

Congrats to Kit Tyler and his CCP team for advancing this sale.

Bruce, I believe Trader Joes is owned by Aldi Nord, the “Euro” Aldi, not the Aldi that operates in the US (the ‘other’ brother). So I’m not sure that one would affect the other.

While Aldi Nord (Trader Joe’s in U.S.) and Aldi Süd (Aldi U.S.) separate themselves geographically in Germany and the remainder of Europe, they seem to have no problem mingling amongst each other in the States.

The Mutual building was valued at less than $4 million and just sold for $13 million. That’s a lot of tax money left on the table.