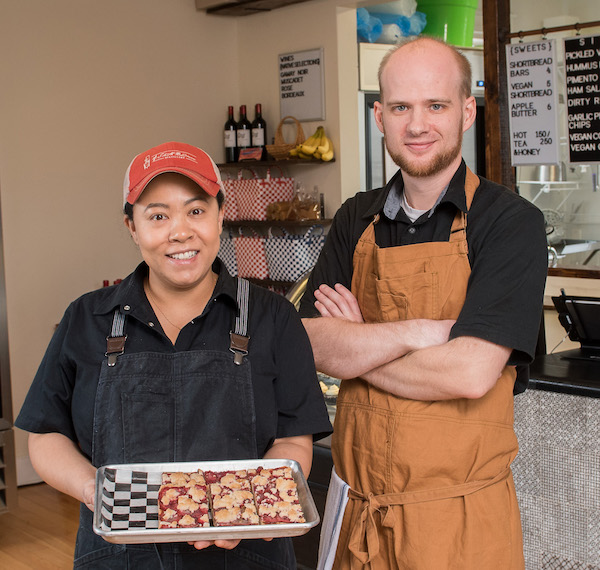 A Church Hill caterer is about to switch to a model built on smaller portions.

Soul N’ Vinegar plans to reorient from a focus on catering, which prior to the pandemic had been its bread-and-butter, toward ready-to-eat, single-serve takeout meals.

The change comes as a result of COVID-19, which caused an 80 percent drop in the company’s catering operations as clients canceled events.

While business has ticked back up recently, the company is betting on takeout as a more stable revenue stream and it’s using a $15,000 grant through Bon Secours’s Supporting East End Entrepreneurship Development (SEED) program to make the transition, owner Michelle Parrish said.

“We applied (for the grant) knowing we needed to come up with our best strategy for this time,” Parrish said.

The grant funds will be used to upgrade equipment at Soul N’ Vinegar’s main location at 2832 R St., which features a market and production facilities. It also operates a cafe within the VCU Institute for Contemporary Art at 601 W. Broad St., which temporarily closed earlier this year due to the pandemic and has since reopened.

Though Soul N’ Vinegar has started to test the takeout concept, Parrish hopes to officially launch it in the next couple of months. Customers place orders online and then pick up from the Church Hill location.

Parrish is also considering whether to offer delivery service, saying it’s something people have become more accustomed to in recent months.

Soul N’ Vinegar would stick largely to the same menu it has traditionally served, an eclectic mix of cuisines that includes soul food.

Parrish’s company has offered prepared meals since it first opened in 2018. But over time, catering came to be its dominant revenue stream.

With the pivot it will effectively flip the revenue stream to balance more heavily toward takeout. Catering will still be on the menu, but in a more limited fashion.

“The difficult thing about catering is that it can be very inconsistent,” Parrish said. “(But) catering will always be something we provide.”

The SEED program awarded a total of $125,000 to 10 businesses located in the East End last month. The program has existed since 2011 to promote economic development in the city’s East End. Capital One and Retail Merchants partnered with Bon Secours and the New York-based Local Initiatives Support Corporation for the program.