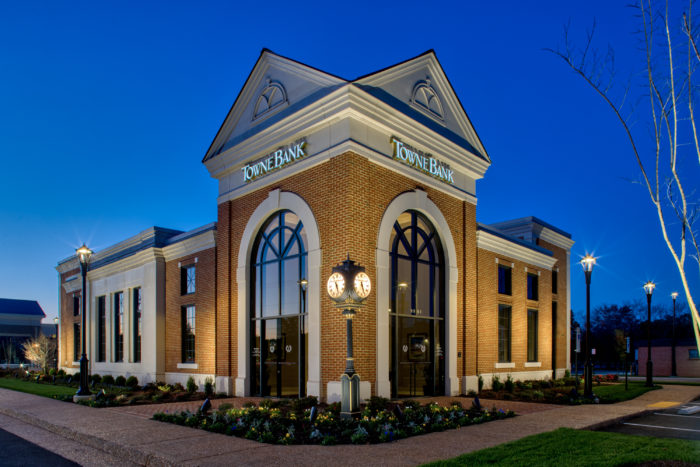 Several years in the making and finally ditching its temporary trailer next door, TowneBank is up and running in its first permanent Chesterfield branch.

The property was built from scratch partially on a site Towne inherited from its acquisition of Franklin Federal Savings Bank in 2015.

Leading the $15 billion bank’s charge in Chesterfield is Matt Clarke, who joined Towne a year ago after 30 years at Wells Fargo and its various predecessors.

Clarke joked that while the trailer the bank worked out of during the branch’s construction was serviceable, the new digs are certainly a step up.

“Needless to say we’re in a much nicer location, but I don’t knock the trailer,” Clarke said.

A Midwest native and William & Mary grad, Clarke said he lived through nine mergers during his years in the Wells family tree. He’s been in the area for 17 years and resides in Chesterfield County.

“My banking career was interesting because there was a merger for a while there every three or four years,” he said. “But the bigger banks right now are focused on the bigger markets and bigger corporations and as I got older, I started wanting to be more part of the community.”

Clarke said there are 12 employees based in the new Iron Bridge building, all of whom followed him over from Wells Fargo. They included retail branch personnel, as well as folks in private banking, commercial banking and a mortgage banker. The bank’s insurance arm, Towne Insurance, has an office across the street.

Clarke said he and his crew are tasked with building the bank’s presence in the county, a job that’s complicated by the pandemic.

“We need to prospect but it’s not the greatest time to go out and prospect and meet people,” he said, adding that they’re getting creative with Zoom and the like, and being safe about hosting customers who are curious to see the new branch.

As for Towne’s future growth plans in Chesterfield, Bob Aston, the bank’s executive chairman, said they have their eye on two additional locations in the county.

“There’s another piece of property we’re working on over on Midlothian (Turnpike),” Aston said, adding that the bank is still in the early stages of a potential deal on the undisclosed site.

Towne also would look to build a branch on Route 360, giving it a trio of branches that Aston thinks gives it the coverage it needs in Chesterfield for the foreseeable future.

One of the Chesterfield buildings would likely become a hub for all of the bank’s local insurance operations, likely spanning 25,000-30,000 square feet, Aston said.

Towne also is keeping busy in its markets outside of Richmond.

It has three branches under construction in Charlotte, North Carolina, where it expanded via the acquisition of Paragon Bank in 2018.

Towne also is beginning renovations on the Norfolk Southern Building in downtown Norfolk, which will house the new headquarters for all its non-bank operations. It co-owns and will share tenancy in the building with children’s hospital CHKD.

“If you’re not growing you’re dying,” Aston said of all that the bank has in the pipeline. “You’ve got to keep moving.”

A wonderful addition to this part of the county building-wise and happy to have Matt Clarke and his team of community bankers making their mark in Chesterfield County!

TowneBank provides great customer service and can help with everything financial. Glad to see them expand in Chesterfield County.