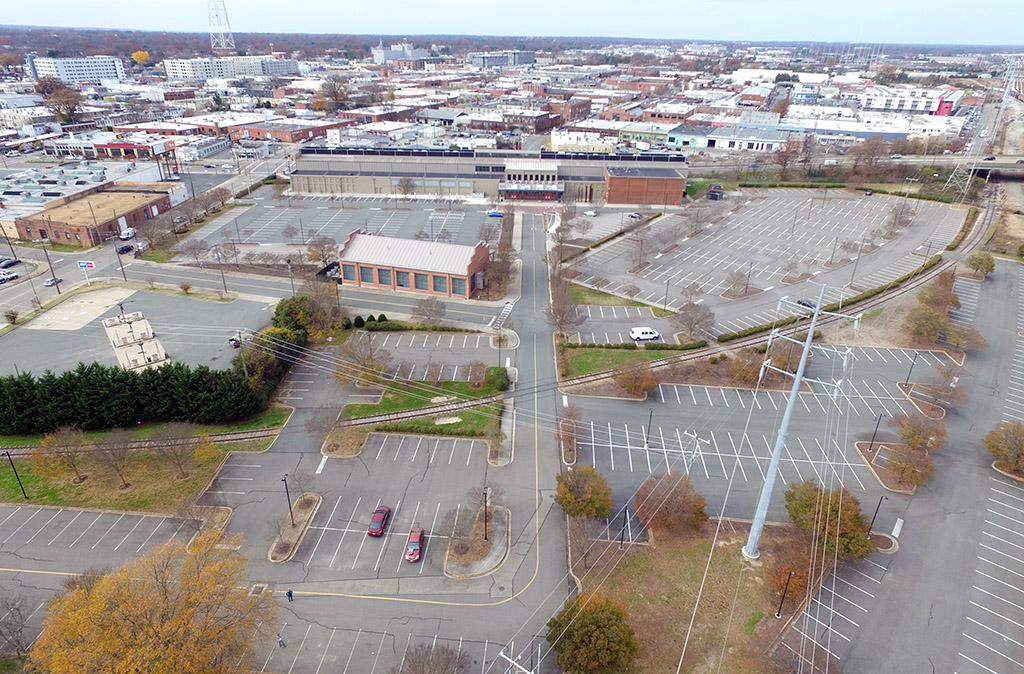 The Bow Tie Cinemas property at Boulevard and Leigh with the Movieland theater in the distance. (Michael Schwartz photos)

After entertaining offers in recent months, the owners of the Movieland at Boulevard Square cinema complex at the edge of Scott’s Addition have a real estate deal in the works that could bring a new sort of attraction to the neighborhood.

Bow Tie Partners, the New York-based owner of movie theater chain Bow Tie Cinemas, is in talks with a prospective buyer for the 17 acres the company owns at the corner of North Arthur Ashe Boulevard and West Leigh Street, according to sources with knowledge of the deal.

It’s unclear who the buyer is, but sources say it is an out-of-town firm that’s willing to pay more than $30 million for the property. The price is expected to rival or potentially exceed the higher end of recent per-acre pricing in that part of the city, one of the most sought-after sections of town for new development.

The unidentified buyer, sources say, would look to use the property for a so-called non-conforming use not permitted under its current TOD-1 zoning.

Given the wide range of uses allowed under TOD and based on the high price, sources say a likely bet in such a scenario would be a casino development.

The assemblage includes the movie theater and its 11 acres, as well as an adjoining 6-acre, mostly wooded site that’s lined with power lines and runs parallel to the railroad tracks.

Messages left for Bow Tie representatives were not returned by press time.

CBRE’s Andrew Ferguson and Eric Williford are handling the listing. Williford said he couldn’t comment on the status of the property.

The company put the property on the market earlier in the year, only to pull it down as the pandemic hit. It then relisted it this summer and began fielding offers. 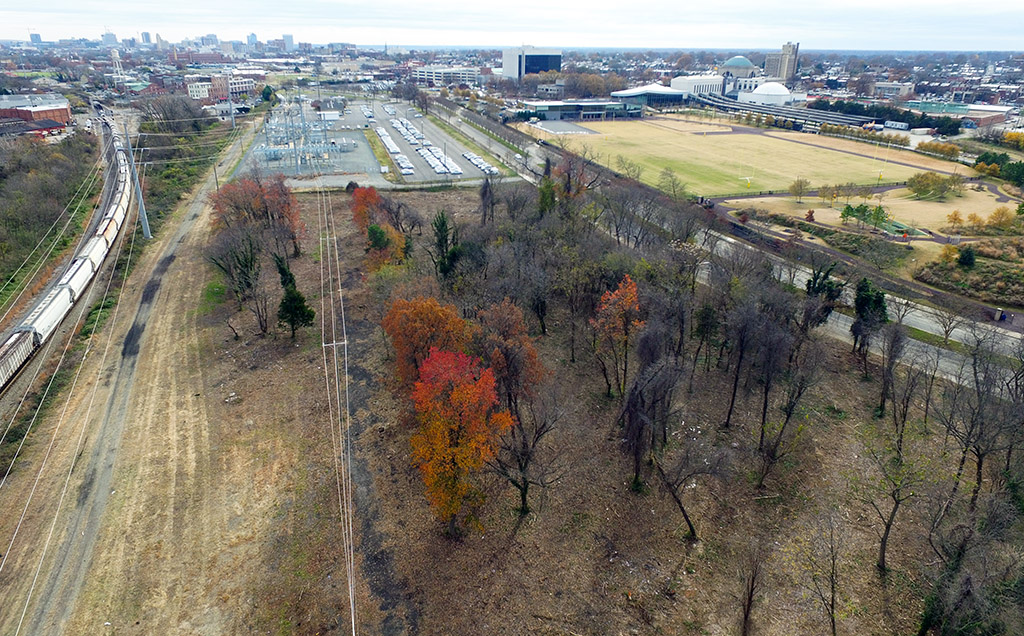 Bow Tie paid $2.14 million for the 11-acre parcel in 2006. It opened the movie complex on the property a few years later. Then in 2011 it acquired the additional property on Leigh from the state for $895,000. The total assemblage was most recently assessed by the city at nearly $21 million.

The rumblings of a potential casino on the site come as the city is ramping up its efforts toward an expected RFP for a casino and resort development within the city limits.

The first step in that process is a public survey, which Mayor Levar Stoney’s administration has been conducting since Dec. 1. The survey, which ends tonight at 11:59 p.m., asks citizens what factors the city should consider when fielding proposals for a resort casino.

The responses are expected to inform an RFP the city expects to put out later this month, with a submission window open until late February 2021. From those, a casino operator would be selected by the city, after input from an outside casino consultant, ahead of an expected voter referendum on Nov. 2, 2021.

Respondents to the RFP would be vying for the one state casino license allocated to Richmond, which was among four other cities in the commonwealth granted the ability to host a resort casino by a law passed in the General Assembly this year.

The others are Norfolk, Portsmouth, Danville and Bristol, all of which have already successfully held voter referendums that approved casino developments.

The Pamunkey also are the only group thus far to publicly state their interest in building a casino and resort in Richmond. Earlier this year, it announced its plans for a $350 million complex on 36 acres just outside Manchester on the city’s Southside.

That proposal would likely compete against any others that are pitched during Richmond’s RFP process. 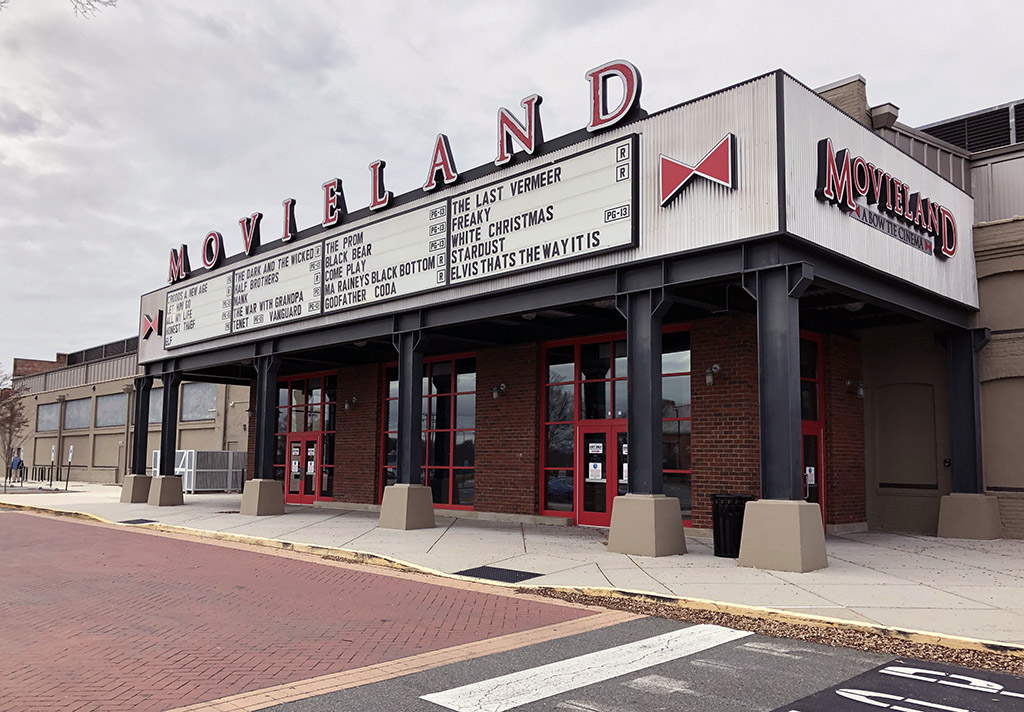 Movieland has been in business since 2009.

As for Bow Tie’s long-term future in Richmond, should the Bow Tie deal lead to the closure of its theater on Arthur Ashe Boulevard, the company does have at least one of other option in hand for an alternate theater site in the city: an entire block it owns downtown at 309 E. Main St.

It paid more than $3 million for the property in 2005, the year before it bought the site at Boulevard and Leigh.

The company lists the downtown property on its website as Jefferson Square, describing it as an “80,580 square foot future development site.”

It’s a shame that the best movie theatre in the Richmond MSA is a casualty of the Covid-19 pandemic .That’s Richmond’s loss ! On the other hand, if the sale closes, it will be a blessing for the owner of Movieland. It just goes to show that the pandemic is a two edged sword.

Well if they can relocate, and also make millions of dollars from the sale of the property, that would probably be a pretty solid win for them vs the situation theaters face elsewhere.

I actually wonder if they are using the property sale for an infusion of cash to keep the theater going. Just imagine the casino or other development on the wooded lot, conversion to garage parking on the Leigh Street lot, then mixed use filling the remaining surface parking with destination anchors on each end. The downtown site will likely be valuable as well.

It looks like their is a lot paved parking lots to be tapped on this land.

Once again the “Good and the Bad” proves that in bad times some do real good, rich get richer big get bigger and poor get poorer and small get smaller.Great deal for BOW TIE company

what the heck does that word salad even mean? While I really hope a casino doesn’t go into that spot, should property owners not be allowed to sell their property? Seems to me even more people would be worse off if commerce shut down in bad times.

A casino is just what Scott’s Addition needs to improve the neighborhood.

There’s no good in a casino – they’re open sores and they bring down any neighborhood they’re built in. That’s one reason why so many of them are built in the middle of nowhere.

That’s not always true. Downtown Detroit has Greektown casino, and the area surrounding it seems to be thriving (and is the most lively and attractive area of the city at night).

Ask the folks who live near Arundel Mills mall….the amount of crime they are experiencing as what they claim is the casino is not a benefit to them.

I’m wondering how Richmond as the fifth horse in this race is expecting to be successful. Can Virginia support that many casinos?

Boz, most of the casinos are wildly successful when they open but revenues drop sharply as the novelty wears off. A Richmond location would be a draw from the north and west via the interstates but would probably suffer the same subsequent decline as an attraction that most of them do. My antenna go up regarding the lack of identity of the silent investors behind this infusion of gambling in the Commonwealth. I expect to see a lot of advertising and political money poured into the region over the next 11 months in an attempt to sell influence. It’ll be… Read more »

They already have a spokesperson. MGM.

Anyone who thinks casinos improve things needs to visit Reno or Atlantic City.

Well, Reno has had gambling for almost 100 years, and AC has had casinos for over 40 years. Things have changed a lot since those times, and frankly, casinos saved AC for years. I’m interested to see how this affort turns out, but I don’t think those are comparable situations.

AC has been bailed out so many times it is model for complete failure. in 2016, the state had to take it over it administration to avoid it filing bankruptcy. It is not comparable but it is a cautionary tale. Atlantic City’s failure is in part due to casinos in PA and upstate NY (and across the East Coast) taking away from its business base.

Atlantic City’s population peaked in the 1930’s, it was in decline long before the first casino’s were opened in the 80’s. The casino’s were an attempt to revitalize a dying area. I have been to 50+ Casino’s and can’t think of hardly a single one being built in the “good part” of town. (Low crime, high economic development, etc). The exception might be the MGM in National Harbor. Certainly building a Casino in the struggling parts of cities has not proven to be fruitful.

@Roger, the population may have decreased. but tourism (the intended target) increased for the first 26 years (’80-’06). As stated elsewhere onhere, the competition for neibhboring state’s casinos have crushed the AC market, at least according to what I’m finding when researching the subject.

Also, I’m curious if the two areas being considered in Richmond, Manchester and Scott’s Addition are considered the struggling parts of Richmond.

SA is certainly not struggling but the location in “Manchester” is actually quite a bit further South down Commerce in an industrial area with the only immediately adjacent residential being Hillside Court.

@Justin, you sir, are correct. My bad. I grew up inthearea andI continue to think of “Manchester” which is a block or 2 north. It’s been a looooong time. For some reason, imagining that area from Jeff Davis will always seem like Manchester to me. Thanks for the correction.

This is just the impetus I need to move and never look back. I can get my share of cheap steak knives at plenty of other places already.

There have been so many botch jobs, and attempted botch jobs, but I still held out hope that we were better and smarter than this.

I agree. I’m in the Museum District and was shocked when some stores, including my favorite walk-to “happy place,” were driven out of Carytown by high rents and ended up in SCOTTS ADDITION which I had never even heard of. After grieving the loss and ranting about gentrification, I drove over and was not too unhappy with what was happening there. So SCOTTS ADDITION BECOMES KIND OF A COOL PLACE. but a Casino!!! Insane.

So the elephant in the room would be the fact that Leigh St narrows to one lane thanks to the highly used bike lanes the City keeps putting up. I’m a biker, but these lanes and their locations are just awful. They will need to be addressed sooner rather than later, hopefully before the City integrates more of them.

I think people need to look at casinos without pre-existing biases. That cuts both ways — to say “Casio helps, look at Detroit!” Well, that is not really inspiring — the two big reasons why people don’t like casinos is, to put it honestly the “Casinos syphon money away from the poor” and “casinos attract the wrong element, make that element more despairate, and then they require more policing and welfare” So — are these things always true??? Well we KNOW that casinos ARE predatory — the games are essentially rigged so the House wins every day if you are… Read more »

What will passersby see when they drive through RVA? Top Golf, the scrap metal place, and a gaudy new casino? We are in a battle for what is or will be the brand if not the *soul* of this city. As I like to say, “we’re a city with a logo but without an identity.” Are we going to be the city of bro sports and gambling attractions (but with better beer), or can we envision more for this old place? We should aspire for better than this. A Smithsonian-level slavery museum? A VMFA-curated urban sculpture park down Monument Ave?