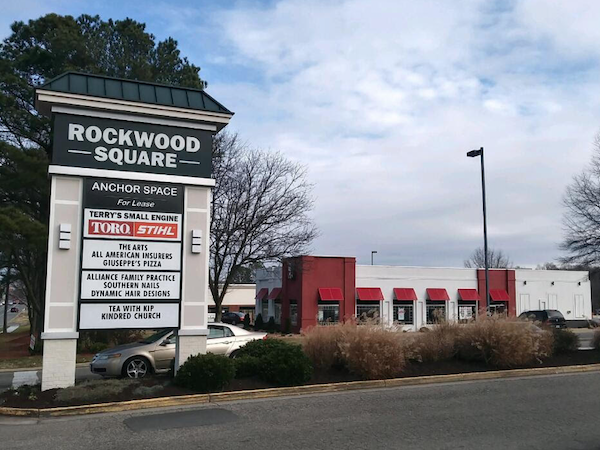 Chesterfield County planners have a plan they say will inject life into an aging commercial hub near Rockwood Park.

The county uses special focus area designations for long-range planning of land-use, development and policies for areas that it deems in transition or having potential to change.

In this case, the county has cast an eye at the shopping centers clustered in the core of the Rockwood focus area and further afield. Rockwood Square, Oxbridge Square and Rockwood Plaza account for about half of the area’s roughly 426,000 square feet of commercial space.

With the retail sector in flux even before the coronavirus pandemic, planners saw a need to chart out a mixed-use future for Rockwood.

“What do we do with aging strip centers and shopping centers?” said Andrew Noxon, a county senior planner. “The county has something like 63 or 66 shopping centers. They’re not all going to survive. So we’re looking at strategies for the redevelopment of these areas.”

The special focus area extends from Falling Creek in the north to Horner’s Run to the south, and from Gregory’s Pond, the Falling Creek Farms and Amberleigh subdivisions westward to the Genito Woods subdivision and Price Club Boulevard. 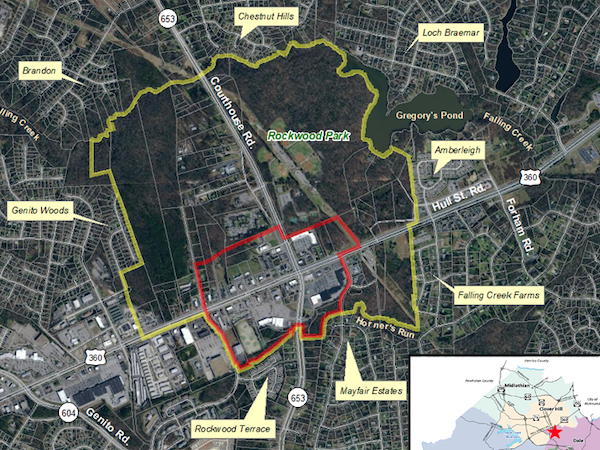 The Rockwood Special Focus Area consists of 673 acres near Rockwood Park in Chesterfield County, and is centered on several shopping centers at the intersection of Hull Street and Courthouse roads. The draft proposal for the area would encourage higher density residential and mixed-use development. (Courtesy of Chesterfield County)

The area is home to Rockwood Park, which welcomed 586,000 visitors in 2019, according to the draft plan. VDOT estimated that about 77,000 vehicles traveled through Rockwood daily in 2019. The county has assessed the entire project area at $96.5 million.

The county doesn’t plan to buy any land to realize the proposal, Planning Manager Steven Haasch said. Rather, the special area, if approved, is intended to map out desired uses. Property owners would apply to rezone for new development in line with the Rockwood special area. The desire for mixed-use development is in keeping with a county comprehensive plan goal to develop mixed-use areas at major intersections.

“Our comprehensive plan calls for mixed-use areas at our major intersections throughout the county, no matter where they are. Right now, most of those intersections are retail strip centers for the most part,” Haasch said.

County staff has worked with the planning commissioners and board supervisors from the Dale and Cloverhill districts to develop the draft. The entire Planning Commission will see the plan for the first time Jan. 19. Both the Planning Commission and Board of Supervisors have to sign off on the proposal, for which the county is soliciting public comment. Haasch said there wasn’t a specific timeline to finalize the plan.

Planners see Rockwood’s central location, the presence of the park and almost 200 acres of undeveloped land as pluses.

One challenge identified in the county’s draft plan is that “multiple” parcels in the area are affected by utility lines, resource protection areas and the county’s water pump station, which could complicate development. Other challenges to the county’s vision include a large number of landowners (105 individual owners who hold 168 parcels) and low residential density, among other things. 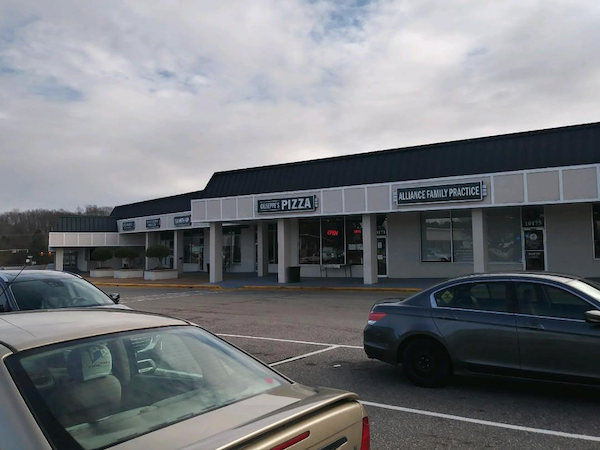 Planners are proposing a 50-year redevelopment of the area away from a retail focus and toward multiple uses and higher density residential. (Jack Jacobs photo)

The draft plan proposes mixed-use zoning for the area’s shopping centers, as well as high-density residential zoning for the area’s northwest and east. The concept plan for the core area specifically suggests in part “that a mix of commercial and higher-density residential uses be located predominantly along Hull Street and Courthouse roads, and along an envisioned north/south interior street creating a “main street” district.”

The draft plan pitches a 50-year phased sequence for redevelopment of the core zone, as well as a grid of new roads in a bid to better connect Rockwood. The plan suggests Rockwood Square and Rockwood Golf Park as “likely” candidates for phase one of redevelopment.

But for now at least, the owners of Rockwood Square, an almost 58,000-square-foot center, say they’re happy with what they have.

“We’re operating as a shopping center and plan to continue to do so as long as it is economically viable,” said Gary Modjeski of Maryland-based Area Properties LLC.

Modjeski said the county discussed the draft plan with Area Properties late last year. And while the idea of residential development is appealing, Area Properties is in a wait-and-see posture until they get the final version of what the county cooks up.

“We’re curious to see what comes out of the oven,” he said.

I’m glad to see Chesterfield waking to the reality of mixed use properties. Many of these suburban centers have been victims of the leapfrog demographic hurdling so endemic in every growing metro area. The auto oriented zoning practice of the 70’s and 80’s that caused so much urban sprawl no longer works. Let’s fill those oceans of asphalt with people so the retail components can thrive again without the frustrating traffic congestion and resulting air pollution.