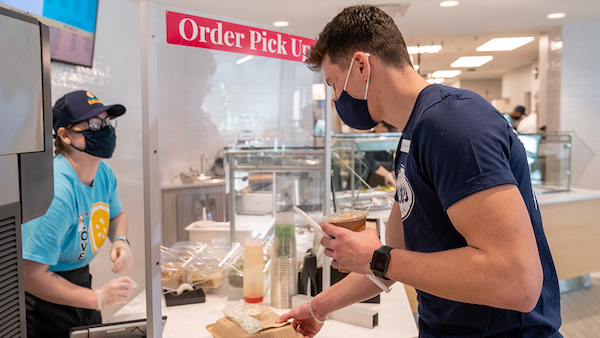 A chain of organic cafes has come to its founder’s alma mater.

Organic Krush opened in January inside the newly minted Well-Being Center at the University of Richmond.

The cafe is Organic Krush’s first on a college campus and second in the Richmond area.

Walrath kept up with the UR campus community in the years after her graduation. When university officials started to think about a Well-Being Center they envisioned a cafe as part of the plan, and her concept seemed like a good fit, Walrath said.

“While my health journey and attachment to wellness started way back in my childhood years with a family that cared a lot about it, my formal education started at University of Richmond,” she said. “Because Organic Krush existed and we all knew each other over the years, it was a natural next step for Organic Krush to be a cafe on their campus.”

The cafe, like the university’s other retail eateries, is owned and operated by the university. The cafe also features a demonstration kitchen to teach students about nutritious meal preparation.

The Well-Being Center is a 36,400-square-foot student health-and-wellness center that opened in January. The center is connected to two other buildings, the Queally Athletic Center and the Millhiser Gym, thereby creating a complex of about 74,000 square feet. At the center, students can make use of a salt spa, meditation garden and other amenities.

“Richmond is quite cutting edge with their approach to health and wellness. They built this wellness center for the students with the idea of treating mind, body, emotional, physical, psychological health all in one center,” Walrath said.

Additionally, the center consolidated the university’s existing Student Health Center as well as Counseling and Psychological Services in one spot.

“Locating these critical student services in a single location enhances the university’s ability to provide integrated care and support for students,” university spokeswoman Sunni Brown said in an email.

Construction on the Well-Being Center started in January 2018. The Walrath Family Foundation, which was established by Walrath and her husband Michael, who is also an alum, contributed an undisclosed amount of money toward the $20 million project.

The university recently kicked off a $25 million renovation and expansion project at Ryland Hall.