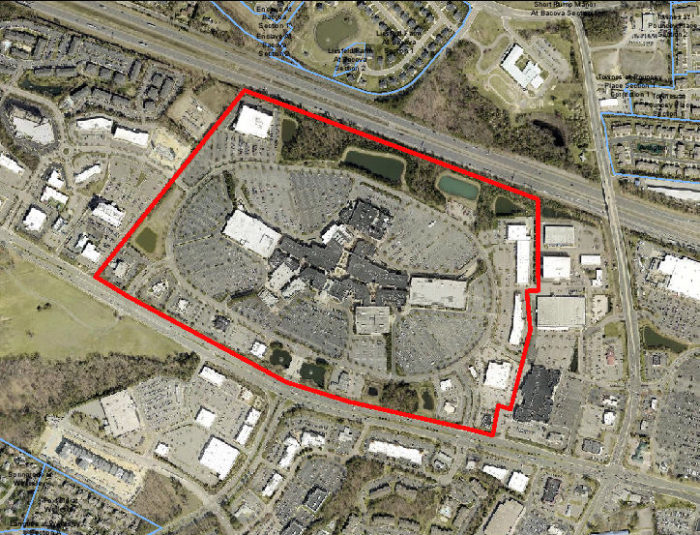 As two of Henrico’s older shopping malls undergo redevelopment transformations, the county’s newest mall is getting its own second look as part of a larger zoning code update that’s nearing the finish line.

The public is invited to weigh in on what the future could hold for Short Pump Town Center in a weeklong charrette that kicks off tonight. The series of intensive planning workshops will be held virtually at henricoconnects.com.

The charrette is the last of five that the county has held as part of a years-long effort to update its code to include what’s known as form-based zoning, aimed at allowing more flexibility in development, redevelopment and infill projects in certain areas than the county’s existing, decades-old zoning code.

Previous charrettes have focused on the Parham-and-Broad area, the Genworth-anchored Brookfield Office Park, the Williamsburg Road corridor between Laburnum Avenue and the airport, and Virginia Center Commons – which, along with Regency, is undergoing a transformation from suburban indoor mall to a mix of retail, residential and other new uses.

While Short Pump Town Center isn’t slated for redevelopment, county planning director Joe Emerson said the nearly 20-year-old outdoor mall does provide opportunities for reimagining to keep it up with the times. The mall’s expansive parking lots could provide for infill development, and additions to the mall — such as the Hyatt House Richmond West hotel — have been made since it opened in 2003. 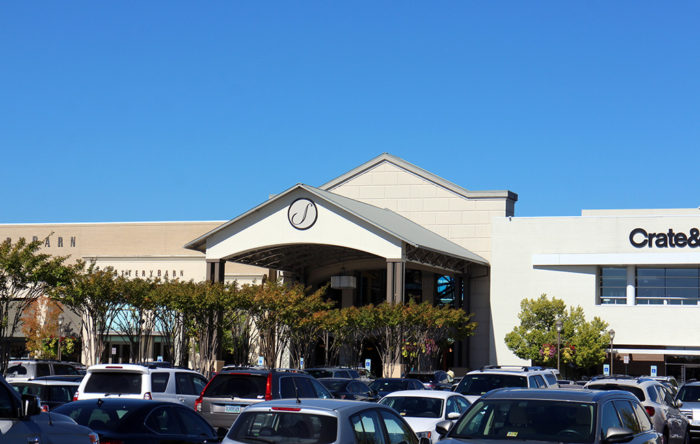 The Short Pump Town Center is 20 years old and not currently slated for redevelopment. (BizSense file)

Emerson said the focus on Short Pump Town Center is similar to the county’s efforts over the past decade to introduce urban mixed-use zoning and infill development in Innsbrook, a suburban office park in the midst of its own evolution.

With the mall, he added, “We’re trying to get ahead of the game a little bit. There’s a very changing retail landscape and climate, and we want to make sure that it remains a viable and productive center for Henrico County.”

Emerson noted that each of the charrette focus areas are largely defined by one or more primary property owners who, with form-based code made available to them, could be motivated to invest in their properties and drive a larger transformation of commercial corridors that could use a boost. While the county cannot compel such investment, it can provide such tools to guide and incentivize development. 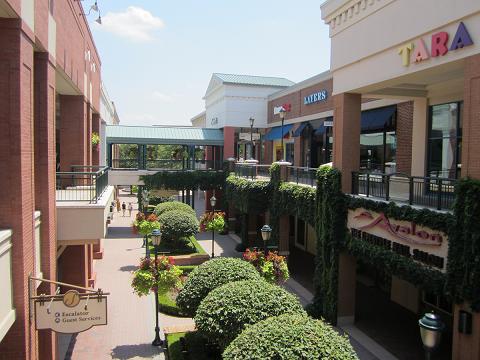 The Short Pump Town Center is an outdoor mall, which makes it easier to redevelop when the times comes. (BizSense file)

In the case of Short Pump Town Center, Emerson said the county engaged with its ownership, which includes Chicago-based Brookfield Properties, local developer Pruitt Cos. and Australia-based QIC, on its interest in a charrette and a form-based overlay for the 62-acre property.

“We discussed with the Pruitts and with Brookfield whether or not they felt that some code changes on the property would give them some advantages to make sure that the mall remained a lively and viable center for the county in years to come, and they came back and said ‘yes, they’d like to look at it,’ ” Emerson said.

“One of the great things about Short Pump Town Center is that it is newer and it’s not your typical enclosed mall,” he said. “That gives it some advantages, because a lot of the ones that are struggling are your typical model of an enclosed mall. Everything has to evolve, and it’s almost 20 years old. Twenty years is maturing, and they do have some vacancies that are occurring.”

One of the mall’s more sizable vacancies was left by Nordstrom, which closed its 120,000-square-foot Short Pump store last summer.

Pruitt Cos. Principal Michael Pruitt deferred comment on the charrette to Brookfield, which manages the mall’s day-to-day operations. A spokeswoman for Brookfield’s retail arm did not respond to an email Friday. 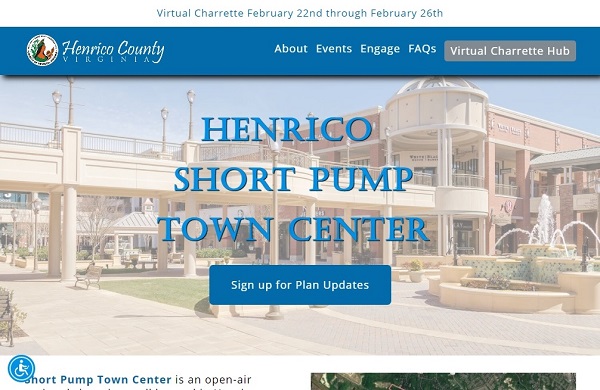 A screenshot of the charrette website. (Courtesy of Henrico County)

The virtual charrette kicks off at 6:30 p.m. with a presentation and initial input from participants. Open design studio sessions will be held from 5-6 p.m. Tuesday through Thursday, and a concluding presentation of a draft plan and review of the week’s work will cap off the charrette at 6:30 p.m. Friday.

The Short Pump charrette will conclude the code update that’s been about three years in the making. The county Planning Commission was slated to consider the update at its meeting this month, which was rescheduled due to weather to this Thursday. A recommendation would go to county supervisors, which would likewise hold a public hearing before making a final vote later this year.

Meanwhile, the region’s other outdoor mall has been a focus of recent planning efforts as well. Richmond’s Stony Point Fashion Park, which has been struggling compared to its Short Pump peer, was one of several focal points of the city’s recently adopted Richmond 300 master plan.

Tear it down and build a park, that’s my suggestion.

Consdering that most of this pace is parking lots they could add a few condos or market rate apartment buildings to some of these parking lots. They could add green space and make this more into a neighorhood then a giant parking lot with buildings growing out of it.