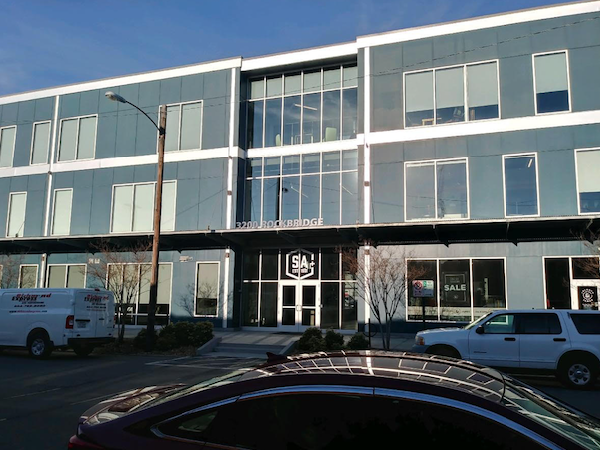 Dunlap & Partners Engineers plans to move into The Symbol at 3200 Rockbridge Road in Scott’s Addition by the end of February. (Jack Jacobs photo)

Even as the pandemic has some companies pondering the future of office space, Scott’s Addition is still attracting its share of new tenants.

Dunlap signed on for a 10,000-square-foot lease at The Symbol building at 3200 Rockbridge Road, and plans to relocate from its current digs at 2112 W. Laburnum Ave. by the end of February. Harvie recently moved into the neighborhood in 2,000 square feet at 3460 W. Clay St. after moving out of the James Center.

For both firms, office space is still a need even in times of social distancing and Scott’s Addition’s appeal with amenities like breweries and restaurants still carry weight.

“Even though we might have migrated from paper and pencil to online programs … there’s still a personal side to how we do things,” Dunlap COO and Principal Charles Ayers said. “Office space, for us, is still in the picture.”

Dunlap, which had been in its 7,000-square-foot spot on Laburnum since 1992, was acquired in December by engineering firm Salas O’Brien. Dunlap will maintain its existing leadership, but will adopt the Salas O’Brien name at some point in the future.

The deal came shortly after Salas announced that it had added Toronto-based Stephenson Engineering to its roster. The firm has 39 offices in the United States and internationally.

Ayers said the majority of Dunlap’s 25 employees are working from the office these days, though they aren’t required to do so.

Tommy Doyle, a partner at Harvie, said the firm moved in in October, about six months after it split off from Wells Fargo Advisors Private Client Group, the banking giant’s investment arm, housed at the James Center.

Doyle said despite the pandemic, it made the move to Scott’s Addition with in-person meetings in mind.

“We want this to be a fun place for our customers to come do business,” Doyle said. “When we’re meeting a new potential client, it goes a long way to see them face to face.”

The firm has three advisers and a total headcount of five, and plans to add another two advisers to its ranks, Managing Partner J. Chris Harvie said.

While Dunlap & Partners and Harvie are far from the only firms to sign new leases recently, the prospects of office space are among the aspects of business that have been disrupted by a shift to remote work due to the pandemic.

That trend has begun to ripple into the Richmond market, as Owens & Minor moved out of Riverfront Plaza after the firm determined its call center employees were doing well enough from home. The Frontier Project moved out of Scott’s Addition in favor of a smaller space in part due to remote work.