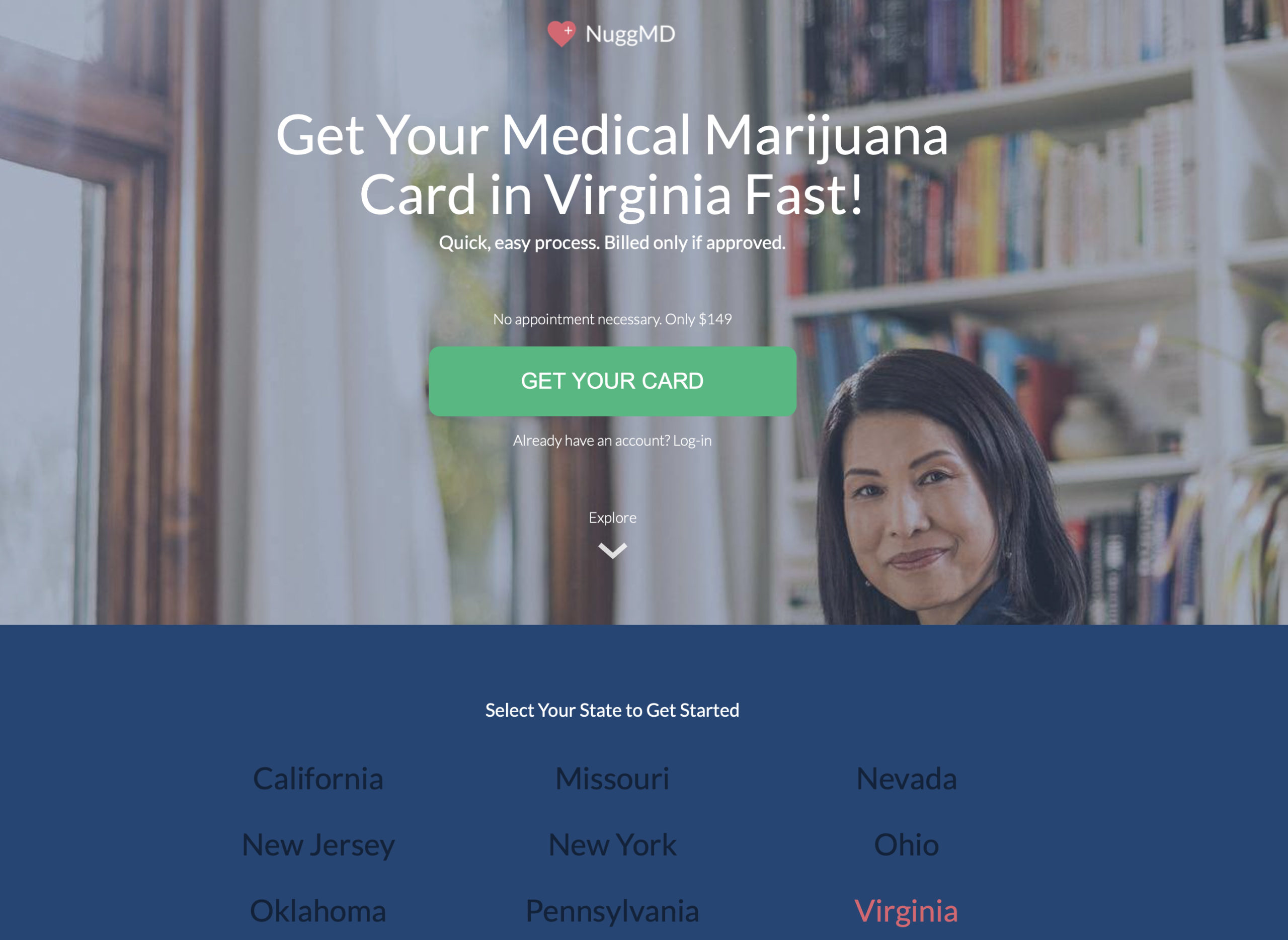 NuggMD operates a telehealth platform that connects patients with doctors who are able conduct evaluations needed for patients to acquire medical marijuana cards. (Courtesy of NuggMD)

With medical marijuana now legal, dispensaries opening in Richmond and elsewhere around the state, and legalization of recreational use on the horizon, a West Coast firm is looking to provide cannabis prescriptions in the commonwealth.

NuggMD officially launched its Virginia operations Monday. The company, via its telehealth portal, connects patients with doctors who will evaluate them and recommend medical marijuana in a virtual appointment. That recommendation is needed when applying for a medical marijuana card through the state’s Board of Pharmacy. The card allows the holder to buy medical marijuana products.

Co-founder and CMO Alex Milligan said the company has helped more than 650,000 patients get in front of doctors virtually for evaluations and renewals of medical marijuana permits.

The California-based company contracts with doctors in a given state to actually do the work of evaluating patients and approving the credentials they need to get medical marijuana in their states. Milligan said the low costs associated with the business model means there aren’t many expenses tied to expansion, so expansion hinges on state laws.

“We are able to quickly move into new states. There isn’t a lot of overhead for us,” Milligan said.

It launched its expansion to Virginia in response to recent legislative changes. In November, Gov. Ralph Northam approved a General Assembly bill that made telemedicine more viable for medical marijuana card evaluations because it removed the requirement that a licensed practitioner be physically with a patient engaged in a telehealth session evaluation with another practitioner.

“Once we learned that was the case, we said, ‘OK, we can start to gear up to go into that state,” Milligan said.

The company launched in 2016, and also operates in California, New York, Ohio, Oklahoma, Pennsylvania, Missouri, New Jersey and Nevada. It has offices in Los Angeles and New York.

House Bill 1988, which is working its way through the General Assembly, would ensure medical marijuana card evaluations could continue to be conducted virtually and without a third-party medical professional involved.

Virginians will pay $149 per appointment booked through NuggMD. Other states have different rates, which vary based on factors like availability of doctors and administrative costs. While in some cases evaluations across state lines are possible, the company prefers to have doctors serve patients in the same state. It launched in Virginia with seven doctors, and plans to increase its Virginia network to eight to 10 doctors in the coming months.

“Our rule of thumb is to get doctors in states where we operate. That way we have in-person (appointments) as an option for patients who want them,” Milligan said.

NuggMD makes its money through service contracts with doctors, allowing the medical professionals access to the company’s platform and marketing support for a fee.

I got my card back in the fall. The Telehealth evaluation was the easy part and cost $120. You just go to a list of providers and they set up a zoom call. It seems like this company is just adding a fee to point you to an already existing list of providers you can find here… https://www.vanorml.org/doctors

The challenge is navigating the State Health Department’s site where you have to submit the documentation from the medical evaluation to get a card. The process was convoluted, nonintuitive and frustrating. https://www.license.dhp.virginia.gov/apply/