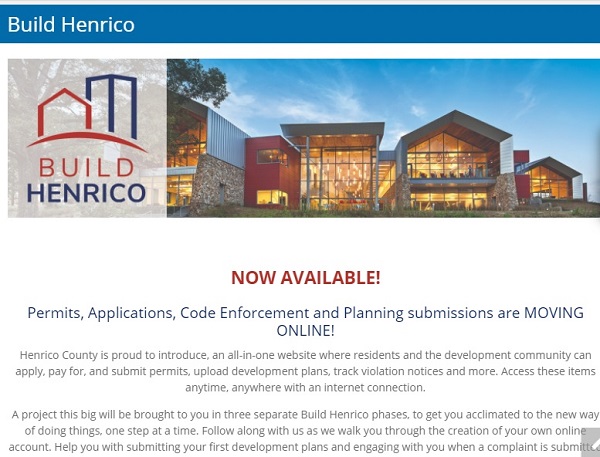 Doing development and construction business in the suburbs is getting easier with the launch of not one but two county land management portals, the initial aspects of which went live the same day.

In mid-February, Henrico County launched the first phase of its years-in-the-making “Build Henrico” platform, which residents and developers ultimately will be able to use for such tasks as submitting development plans, applying for building permits, paying fees, and making and tracking zoning complaints.

The same day, across the river, Chesterfield County rolled out its own years-long effort, likewise referred to as an Enterprise Land Management (ELM) system, which consolidates zoning, plan review, utility connections, code enforcement, permitting and inspections onto a single platform.

That the two separate efforts launched simultaneously was, by all accounts, a total coincidence.

“It was completely happenstance,” said Jesse Smith, Chesterfield’s deputy county administrator for community development. “We were aware that they were migrating over to more automation but had no idea that we were launching on the same day.”

“I think ours was out 30 minutes before Henrico’s,” said Andy Gillies, Chesterfield’s planning director. Laughing, he added: “We were first.”

Lisa Orlosky, a Henrico IT manager who led that county’s effort along with department colleague Jenn Montrose, said they were not aware of the timing until after they’d launched, likewise chalking up the scenario to chance.

“Our launch dates were set months in advance,” Orlosky said. “I do think it’s interesting, the coincidence. But that’s all it is — a coincidence.” 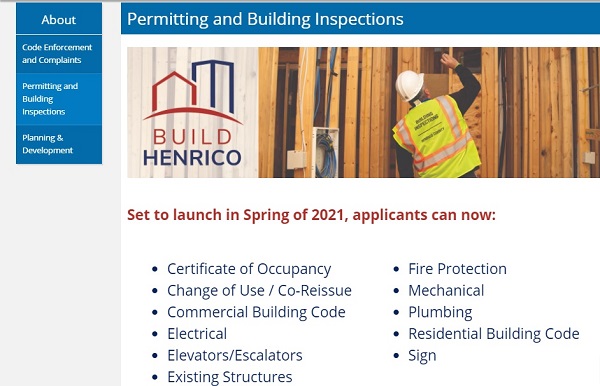 The Build Henrico platform is being introduced in phases, with the first focused on zoning code enforcement and annual inspections. (Screenshot)

Set to roll out in phases through next year, Build Henrico replaces the county’s previous land management system, which Orlosky said dated back to 2001.

The new website includes how-to instructions to assist users with different tasks, and video tutorials are planned to be added over time. Users can create an account, which Orlosky said is optional, and related county staff was trained on the system before the initial phase went live Feb. 16.

The first phase focuses on zoning code enforcement and annual inspections. Businesses and residents can report zoning violations and neighborhood issues such as potholes or overgrown vegetation. The platform allows them to track the status of their complaints and pinpoint locations using a map function.

A second phase, set to launch sometime this spring, will allow builders to apply for various permits online, as well as estimate fees, request inspections and obtain certificates of occupancy. A final phase will facilitate development plan submissions and is scheduled to roll out in 2022.

“Right now, a lot of those processes are handled through electronic forms on our website or paper processes,” Orlosky said. “This new system is going to allow people to do all of those things completely online.”

The county contracted with Computronix, a software development company based in Colorado, to develop and implement Build Henrico. County supervisors awarded the firm a $4.3 million contract in July, though Orlosky said the planning effort has been underway since early 2019.

Orlosky said Computronix was selected over other potential vendors for its system technology and management, which it provides to more than 400 corporate clients, according to its website.

“We spent a great deal of time researching what our options were to replace our existing system, and doing a lot of business analysis and process analysis before we chose a vendor,” she said. “We were very careful about what we chose to be a solution for Henrico.” 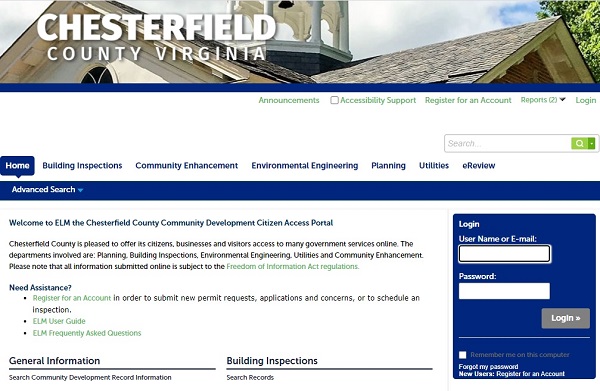 The Chesterfield ELM cost the county $3.22 million to create but was actually budgeted for $3.76 million. It will allow several county departments to share information easier. (Screenshot)

Chesterfield budgeted $3.76 million for the effort, which ended up costing about $3.22 million. Remaining funds will be put toward additional rollout phases that will enhance the platform, said Dean Jadlowski, division chief of the county’s information systems technology and project management office.

The new platform replaces six older systems that Smith said operated separately, with departments needing to consult others to retrieve certain information. The ELM platform not only brings those systems together, he said, but also will assist customers doing business with the county.

“We had a lot of old legacy systems, a lot of things that were mainframe-based, data-based. This marries them all into one coherent platform that’s web-based, so updates are pushed out automatically,” Smith said.

“Obviously, we have a lot of folks who apply for permits, applications, inspections. It’s to try to help them do business more easily and in the way that they want to,” he said. “From the back-end side and the staff perspective, it’s trying to bring six different departments together in their systems and make sure that we are talking together, so that they can perform their work in a timely manner.”

Added Gillies: “It was a great way for us to segue into getting rid of the silo-ism of each department. We can all have the same information and work together. It’s really going to be a great benefit to each department to be able to work in one consolidated system.”

While the platforms are conducive to doing contactless business in the midst of a pandemic, both groups pointed out that their efforts were underway long before the arrival of COVID-19, though the virus did prompt Chesterfield to roll out certain features of its system last year.

Users of Chesterfield’s portal must register for an account to submit permit requests or schedule an inspection, while records searches can be performed without an account. The site includes user guides explaining the ELM system, as well as a list of frequently asked questions. The system also utilizes a mobile app and automated phone system.

Both counties will continue to accept paper submissions on an as-needed basis, but officials said the goal is for users to learn and gravitate to the online platforms.

“We will still accommodate those who do not have the means to submit an electronic plan,” Orlosky said, “but we are hoping to get people accustomed to the electronic submissions. It’s much easier once you get the hang of it.”

The Build Henrico website is here. The Chesterfield ELM can be found here.

The platforms add to other online development tools in the region. In recent years, the City of Richmond has been rolling out its Online Permit Portal, which Georgia-based EnerGov Solutions developed on a $1.63 million contract that the city awarded in 2012.