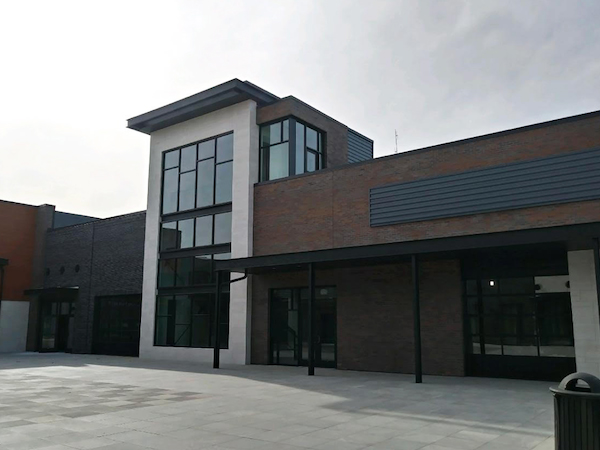 Sloop John B, a Carribean-inspired taco restaurant, and In The Sauce, a pizza joint, plan to open at Regency in the mall’s redeveloped entry plaza this year. (Jack Jacobs photo)

Before the year is out, Garland Taylor plans to be slinging tacos and pizza out the ever-evolving Regency mall.

Taylor, who previously owned the locally-based chain Home Team Grill, among other concepts, plans to open Sloop John B, a Caribbean-inspired taco restaurant at the mall this summer. It’ll be followed by pizza-and-beer joint In The Sauce in late 2021. The restaurants will divvy up what was formerly the McCormack’s Big Whisky Grill at the redesigned, Quioccasin Road-side entrance to the mall.

Sloop John B will occupy about 10,000 square feet, divided about evenly between the restaurant proper and a new rooftop area.

The restaurant’s menu will be heavily tilted toward tacos, but will also feature rice bowls, soups and chips with dips and salsas. Cocktails will be another focus.

The restaurant is expected to have space for more than 200 people inside, along with another 300 people on the rooftop area, though Taylor expects that when the restaurant opens COVID-19 public health restrictions will still be in play.

Sloop John B will be closer to the parking lot, with In the Sauce nestled between it and the plaza’s mall entrance. McCormack’s relocated elsewhere within the mall.

Taylor said he was drawn to Regency in part because of his excitement about its redevelopment. Mall owners Rebkee Co. and Thalhimer Realty Partners are transforming the mall to make way for apartments and experiential anchors like Surge Adventure Park.

“I saw it in its glory days. It was the place where anybody that was looking for the best that Richmond had to offer, that’s where they were going,” he said of the mall. “I’m a believer in where (Thalhimer and Rebkee) are going.”

The size of the former McCormack’s (which was a Texas de Brazil before that) was a daunting prospect for Taylor initially, and in conversations with mall owners they were able to land on the idea to split the space into two separate concepts. Both restaurant concepts were created to cater to the people in the neighborhoods around the mall.

“When I look at that demographic and I look at who’s serving that demographic, I really think it’s a desert over there and I’m very excited about what’s going into the mall,” Taylor said. “I really do think the core business we can do is from the communities nearby.”

The name of Sloop John B is a reference to the 1966 Beach Boys version of a Bahamian folk song about a shipwreck.

Taylor said the pizza concept is still being finalized but said it would include beer brewed in-house. He said he wasn’t going for brick-oven or Neapolitan style, but aimed to develop something with a special twist to it.

Taylor expects to hire about 100 people between both restaurants. He declined to share his investment in either venture.

Matthew Mullett of the Shockoe Group represented Taylor in the lease negotiations.

Taylor also owns Twin Hickory Tavern at 11351 Nuckols Road in Glen Allen. The restaurant is a pandemic rebrand of the Home Team Grill formerly located there. Taylor formerly owned the local sports bar chain, which still has a location near VCU. Taylor also owned Union Table and Tap, which shuttered in the West End in 2017.

VCU Business Professor Wally Johnson smiles down on you Garland. Congratulations on all your restaurant successes.