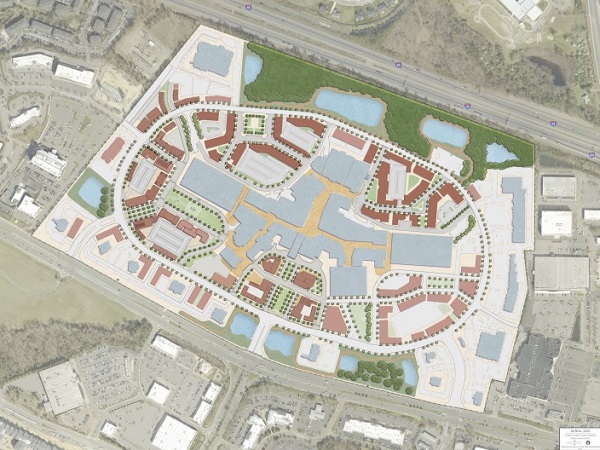 Those were among the ideas floated for the future of Short Pump Town Center in a weeklong charrette that concluded in late February.

More than 85 people took part in the daily series of planning sessions, which served to bookend a years-long effort to update Henrico County’s code to include form-based zoning, an optional but heavily incentivized approach to encouraging development and redevelopment in certain areas of the county.

The Short Pump charrette was the last of five that have been held throughout the process. Others focused on the Parham-and-Broad area and the Genworth-anchored Brookfield Office Park, the Williamsburg Road corridor between Laburnum Avenue and the airport, and Virginia Center Commons – which, along with Regency, is one of two malls in the county undergoing transformation. 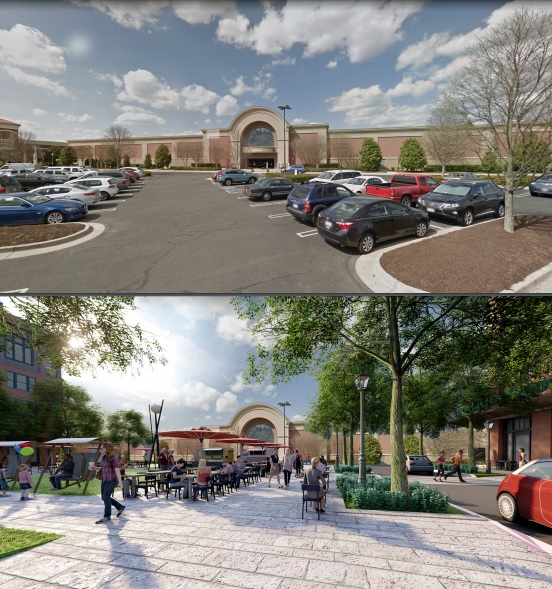 Before-and-after images of how infill could transform the area next to Dillard’s.

The open-air Short Pump Town Center, which opened in 2003, is nearing the 20-year mark and showing its age, particularly with its sea of surface parking that has fallen out of favor with today’s urban and suburban planners.

As such, the charrette focused mainly on those areas in envisioning what the property could potentially become. Planners with consulting firms Clarion Associates and Dover, Kohl & Partners bounced ideas off participants and also solicited their suggestions for the prospect of transitioning the mall property into a neighborhood of its own, complete with residential buildings, civic areas and additional commercial development that could generate more revenue for the county.

Consultants likened the concept to Val D’Europe, a shopping mall and mixed-use development east of Paris, as well as stateside developments like The Wharf in D.C., where retail, office and residential buildings enclose and camouflage structured parking within.

The ideas for Short Pump envision as many as six parking garages that would anchor clusters of infill development across the mall’s parking lots. Additional buildings would hug the mall’s loop road, with park areas and greenspace filling gaps between and along Interstate 64 and parts of West Broad Street.

Access to the site would be enhanced with easier access points on the east and west sides, ideally alleviating the main entrances from Broad. Presenters acknowledged that such improvements likely would not solve the area’s traffic challenges, but they said the goal would be to keep them from getting worse. 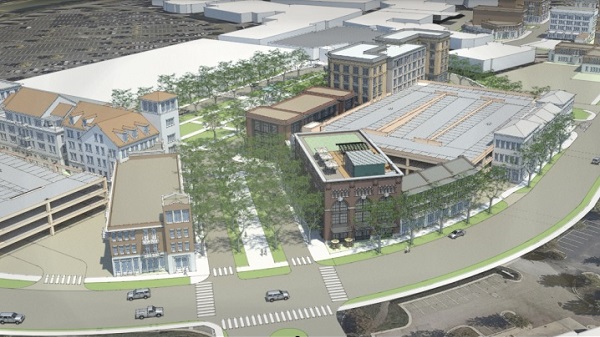 A rendering of a village-style “main street” that could fill the area south of the Macy’s store.

Other ideas include a village green area and a transportation hub on the south side of the Macy’s department store, where an internal bus stop and other facilities for multimodal transportation could be located.

Presenters also noted that Nordstrom’s recent exit presents the mall with an opportunity to reimagine that now-vacant space, either as a revamped store space with additional windows, or a chopped-up space to accommodate more stores. 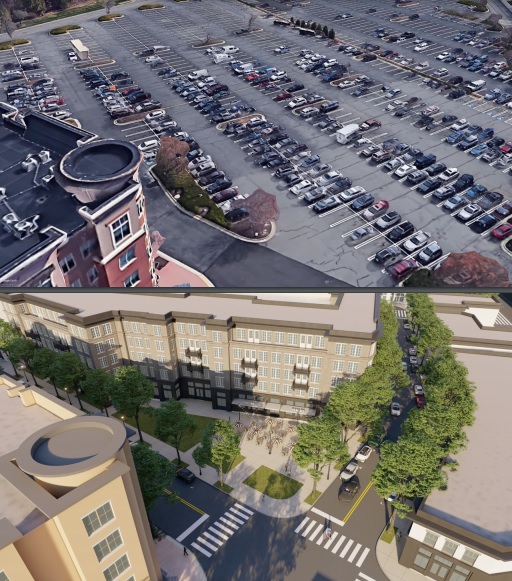 Before-and-after images of potential infill near the mall’s main entrance.

The consultants emphasized that such moves are completely up to the property owners and that the form-based code that the charrette will inform is only an option available to them.

A spokeswoman for Brookfield Properties, which owns the mall along with Australia-based QIC and local developer Pruitt Cos., declined to comment to BizSense on any plans for the former Nordstrom space.

The charrette’s wrap-up presentation can be viewed here, and more information from the session is compiled on the county’s website.

Results from the charrettes for the Broad-and-Parham area, Brookfield Office Park, Williamsburg Road and Virginia Center Commons are posted here.

The county Planning Commission voted to approve the code update at its latest meeting on Feb. 25. A public hearing and vote by the county Board of Supervisors is anticipated later this year.

This area of Short Pump does not need anymore parking decks and tight spaces. This is not downtown Richmond or New York City. Please make it pleasing to the eye and not so city-like.

I agree Hope Webb. The “increased density” movement we’re seeing in our suburbs is not driven by residents. It’s driven by wealthy, greedy developers who want to cram more people into less space. Residents, in turn, get more traffic, increased pollution, increased noise, crowded schools, fewer natural spaces, and a lower quality of life.
Btw, I tried to give your comment a thumbs up, but the algorithm wouldn’t allow it. It placed a thumbs down instead.

I think the idea is to contain the development where it is and upgrade it rather then let it decline into blight while the suburban sprawl pushes further outward. These days, people want to live work and play in a walkable setting. The population in our region is expanding. Without proper planning and zoning, it could turn into a mess like Houston.

To be fair, even without stringent zoning controls Houston has plenty of dense and attractive mixed-use areas. The market is driving urbanism too, not just top-down planners.

Gee Leon, that’s weird because i gave the comment a thumbs up to test that out, then switched it to thumbs down.

Yeah the amount of downvotes on comments has been suspect here on the website for awhile now. Not sure what’s going on.

I Kind of view this as a sign showing how much of our urban space is wasted to parking Lots and turning a parking lot into a building is about as as green as it can get.

Right? Heaven forbid that the wonderful vistas of the beautiful seas of parking lots be besmirched by legitimate, thoughtful, well-planned, efficient, mixed-use development. 🙄

There is NOTHING pleasing about Short Pump as it currently exists. It’s ugly. The entire area needs thoughtful central planning and to be redesigned to be more pedestrian friendly and to include green spaces. The reason that the traffic is so bad is because you can only get around in your car.

They need to build three to four streets that follow Board Street and crack open a few dead end streets so you don’t need to take Board Street for everything.

The had the right idea when they built the mall, there were going to have I64 access until the owners or Regency complained about it. That would have been a huge game changer. I still think there would be room on the west side or North Gayton (maybe having to buy a couple of houses) to put a couple of exits to put you basically right at the far end of the mall.

Remember this is a workshop without the owners input. From what I can tell parking decks cost about $20k-$25K per spot to build. I think the mall has close to 4000 parking spots ($60-$90 sq ft). I don’t think the owners are going to spend $80-$100 million in parking structures unless the economics make sense. If you have land that cost $50 a square foot and a parking structure that cost $75 a square foot by the time you put any construction for living/retail on it you are going to be looking at selling prices of $300-$500 a foot which… Read more »

So happy to see the thoughtful redevelopment ideas- especially the idea of a transit hub. Is there any discussion of providing pedestrians a crosswalk or some sort of safe route to cross Broad Street to get TO the pedestrian-friendly mall??

A pedestrian bridge over Broad Street would be cool. Remember, the term “mixed-use” anticipates many people living there in apartments, condos, and townhouses in sort of their own self-sufficient economic and social ecosystem.

I agree with the pedestrian bridge idea. It’s sad we don’t have the mass transit infrastructure that would probably lead to a better planned Short Pump/Broad St corridor.

I think this is a great idea and way to keep Short Pump Towne Center as the anchor of the far west end area. I love the idea of green spaces as a place to take our children while we wait for a table at a restaurant, or even just to play while making a trip to the mall.

This is a wonderful idea and the kind of forward thinking that will continue to make our region attractive and desirable.

It will take 20 minutes to get in and out of there. People complain about the traffic already. This will make it 10 times worse. They would need an exit off I64, directly into the mall imo.

Wasn’t there a study made where they making Gayton Rd an exit ramp? It was supposed to be a diverging diamond Interchange.

How about an additional exit off of I-64? The existing linear traffic plan on West Broad Street, between the two existing highway exits, likely cannot sustain the additional volume of vehicles. Short Pumpers already complain about the traffic (which really isn’t that bad), but a new road grid will be necessary eventually.

They want to put more multi level residential space and office complexes all around this mall? Like we need more vehicles on the stretch of Broad Street which I referred to as “Fairfax on the James”? Our county planning commission, and I use the word “planning” loosely, created this monster. Broad Street can’t handle any more traffic out here. When this area was planned 40 years ago, it should’ve included access from the interstate highways, widening of the underpass of Broad Street under 64 and all sorts of other things that they neglected to do. Apparently there was no consideration… Read more »

They need more ‘green spaces’ to offset the amount of Co2 from all the traffic. haha Without proper mass transit, Short Pump will reach a breaking point for traffic eventually which will kill growth. I also agree that people need to embrace the changes going on that point to a need for much less office space and brick & mortar retail in the future as we move to a online/delivery economy.

Ewwww and what do you know, in the comments all the good old boy developers are talking about how much of a good idea it is

I’m glad they are not knocking down ten acres of forest to build this it’s all paved over parking lots.

Bingo! And I can guarantee you none of them live in Short Pump and constantly complain about the suburbs. And green spaces? Short Pump area is littered with trees. Compare that with downtown? It’s not even close. Downtown is cesspool of filth. People move to the suburbs to get away from the mass congestion of downtown. For all those constantly complaining about short pump, just stay out. It’s pretty simple.

The proposed site reminds me somewhat of Tyson’s I and II, up in Northern VA.

Many years ago I moved here from out of state. I showed up to JR Tucker High School. Tucker was an “open campus” complex. This means you walked outside to your classes. It was August… In Virginia…
You spent much your school year either hot, or cold, or wet, or possibly a combination of those. “Why?”, I thought. “Why would anyone do such a stupid thing as this school design?”
Years later I would make one of my rare trips to Short Pump Town Center. It was Tucker all over again. Thanks but no thanks.

Tucker was bullt in the ’60s. No one had air conditioning in schools. I would have given anything to have had an open campus back then. And the year SPTC was built (2003) there vwere ony two malls built in the country. SPTC and Stony Point. Both are open air.

“And the year SPTC was built (2003) there vwere ony two malls built in the country. SPTC and Stony Point. Both are open air.“

I would consider having to walk from one classroom to another in the open mopen air. Regardless few if any had AC. but you knew that.

Thanks. My mistake. Perhaps there were only two “open air” centers.