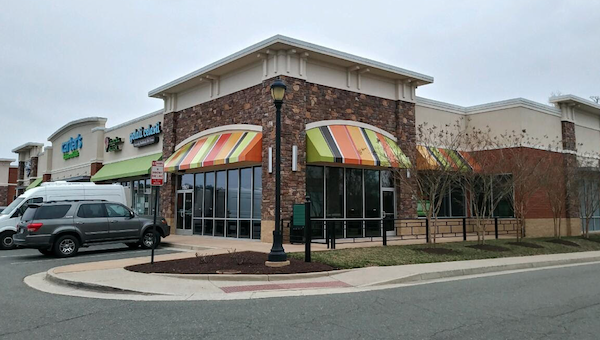 Clean Eatz, a chain of restaurants that pitches itself as a spot for health food, recently signed a lease on its first Richmond-area location, the former home of a Zoes Kitchen at The Corner at Short Pump shopping center. (Jack Jacobs photo)

A restaurant chain that prides itself on its healthy menu will make its Richmond area debut next door to an ice cream shop.

Clean Eatz, which has more than 50 locations in 13 states, recently signed a lease on 2,800 square feet at 11801 W. Broad St., in The Corner at Short Pump shopping center. It’ll share a wall with an outpost of local ice cream shop Gelati Celesti.

Clean Eatz’s upcoming location will be its first in the Richmond market, and it’ll open in the space that was formerly home to a Zoes Kitchen. Zoes vacated the Short Pump space earlier in the pandemic in 2020 after falling behind on its rent, prompting a lawsuit filed by the landlord.

A Clean Eatz spokeswoman said the location is expected to open in the spring but declined to answer additional questions.

Clean Eatz’s menu features bowls (which run from about $9-$12) as well as burgers, wraps and flatbreads that can be had for about $9 each in addition to smoothies, salads and other items.  It offers meal plans and catering as well as supplements and protein bars. The meal plan comes in five-, 10-, 15- and 21-meal packages which range in price from $38 to $128, according to the company’s website.

In Virginia, the company currently has locations in Norfolk and Virginia Beach.

Alicia Brown, Connie Jordan Nielsen and Nicki Jassy of Cushman & Wakefield | Thalhimer handled the lease negotiations on behalf of the landlord, Rebkee Cos.