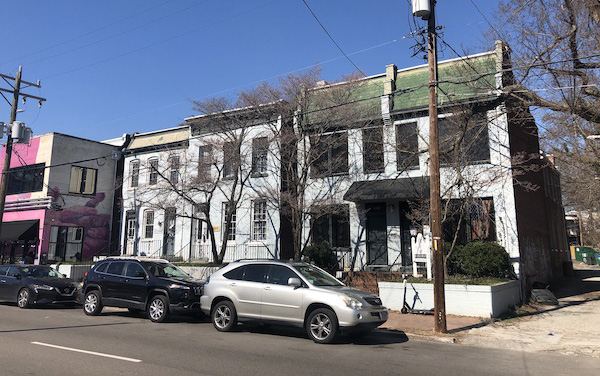 A row of office buildings in the Fan sold last fall for $1.3 million and are now set to be razed for a mixed-use development. (Mike Platania photo)

A row of aging office buildings in the Fan is set to be razed to make way for a new salon-anchored development.

Local developer and entrepreneur Andrew Flint is planning to replace four century-old structures in the 2600 block of West Cary Street with a mixed-use project that will include a storefront for Hive Salon Studios, a local chain he owns.

“Originally, we were trying to salvage the buildings,” Flint said. “But the more we looked at it with contractors it wasn’t going to be possible to have a high-functioning space.”

The offices on the site have been vacated ahead of demolition, which Flint said he hopes to begin soon.

Flint is planning a two-story, 9,000-square-foot building for the 0.25-acre site. It will include a 4,000-square-foot retail space on the bottom floor for Hive. It will be Hive’s fourth location, adding to spots in Bon Air, Scott’s Addition and the West End.

The building’s upper level will house a handful of apartments, with a mix of one- and two-bedroom units with both front- and rear-facing balconies.

The land’s zoning, B-6 Mixed Use Business District, allows for up to four stories and permits Flint to build the new project by right.

“I wanted to do something larger because of the zoning but I saw construction costs increasing rapidly when planning that,” he said.

The property also includes a 30-spot parking lot behind the current buildings, which Flint said he will keep.

“That’s really a thing that made it the most attractive, that we had enough parking for what we were trying to do with The Hive,” Flint said.

Fultz & Singh Architects is designing the project, and Flint said he’s not yet selected a general contractor. He’s expecting the new building to be complete in spring of 2022. Flint said the project’s cost has not been finalized.

The new Hive location will be across from a pair of new food options: Mike Ledesma’s InstaBowl, which opened in the former Acacia space at 2601 W. Cary St., and The Beet Box, a juice bar from local gym owner Antione Meredith.

In addition to owning Hive, Flint has been adding to his real estate holdings, including the purchase of Fultz & Singh’s office building on West Leigh Street in Scott’s Addition for $750,000. His former woodshop, Method Woodworking and Design, once shared the space with the architects, but Flint said he’s now turning that space into a shell.

“I’m waiting for a tenant for it. I’m hoping that picks back up again in the summer and fall,” Flint said, adding that he could see it as a retail space if an office tenant doesn’t arrive.

If there are 30 spaces there, then Flint must own that extended lot that meets Robinson Street as well. Does razing these buildings require City approval and that of The Fan Association? If not, I’m surprised.

The Fan District Association only goes as far south as the south side of West Main St per the FDA website:

These properties haven’t been well maintained, but I wish they could be salvaged or incorporated into something more dense.

I live in this neighborhood and I understand that the property is probably zoned for commercial use. Still, when you consider the staggering demand for single family homes in the city right now, it seems like it would also be highly profitable to renovate these buildings as houses even in their deteriorating condition.

Looks like a nice project. Too bad it can’t be three stories. The added density would be nice. But I understand that implications for construction costs.

It seems strange to destroy four, century-old two story buildings only to make a new two-story building… Finances aside, to justify the demolition of these structures, one would think four stories (or more) would be called for. And a very high -quality of finish on the façade. Fortunately, we can expect quality design from Fultz & Singh, but it would be nice if the density could be reconsidered.

We will see the “quality” of the project. I promise what they build to replace the 100 year structures will be obsolete and probably blighted in less than 30 years.

I agree with the others; if going to demo consider more density.

At lease salvage the facades to maintain the street frontage urban fabric.

Fixed that for you, bizsense.

I don’t object to this project, though I might in some places in the fan. But shame they aren’t going higher.

Congrats! I’ve lived 2 blocks away for 14 years and I’m happy to welcome Hive to our corner south of the Fan.