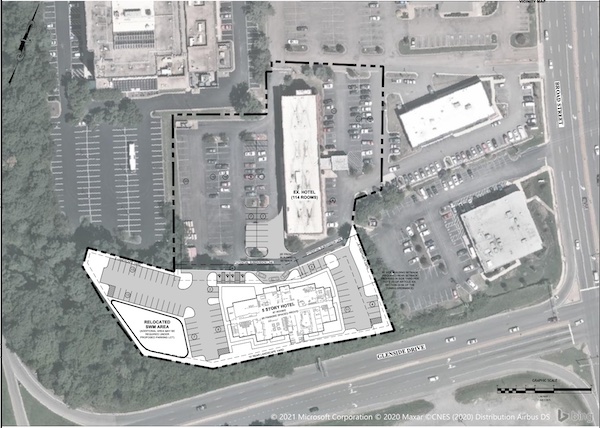 A new hotel is planned near Glenside Drive’s exit onto Interstate 64. (Courtesy of county documents)

A year after facing some of the lowest occupancy rates in the industry’s history in the early days of the pandemic, some local hotel operators are adding to their portfolios.

A new Towneplace Suites hotel is being planned for 7007 W. Broad St. in Henrico, on a plot of vacant land facing Glenside Drive and the Interstate 64 interchange.

Plans filed with the county last week show the Towneplace Suites building would rise five stories and house 87 rooms. Petersburg-based The Site Design Company is listed as the project’s engineer. 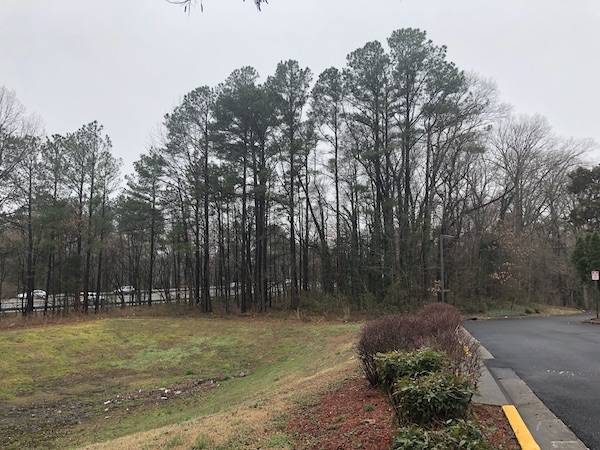 The land the hotel would be built on is currently a wooded area. (Mike Platania photo)

Sky Hotels Group has owned the 3.5-acre parcel that houses the Best Western and the future Towneplace hotel since 2011 when it bought it for $5 million. The land is zoned M-1 Light Industrial District.

The Towneplace Suites would be at least the fourth hotel along West Broad for Patel. Henrico records show that in addition to the Best Western, Patel also owns the Econo Lodge and the Country Inn & Suites by Radisson at 7300 and 8010 W. Broad St., respectively.

While it’s unclear when Patel looks to begin work on the new hotel, local competitor Shamin Hotels is already at work on a new 120-room Home2 Suites nearby at 2925 Emerywood Parkway.

Planning for that hotel began in 2018, and Shamin CEO Neil Amin said they are preparing to go vertical on the pad site, which sits next door to Shamin’s Embassy Suites by Hilton.

Shamin’s also been busy in Hampton Roads in 2021. Newport News property records show that earlier this month the company closed on a 120-room Hampton Inn & Suites at 12251 Jefferson Ave.

Shamin also recently completed renovations on its The Landing at Hampton Marina in downtown Hampton. That property carries the Tapestry Collection by Hilton flag.

Interesting that hotels are going up in this article, but lack of inventory for single family homes is discussed in another article.

I remember they built a massive hotel out of once was parking lot by Interstate 64 and Board Street. I think from a planning point of view they are easier to put in existing shopping malls and parking lots due to people not living their. And the planning officals are less worried about long term noise.

Yes, because who doesn’t love to try to sleep in a building right next to the interstate?

It looks cool looks like Henrico County is getting a free section of sidewalk along Glen Side Drive.

Henrico County is the master at getting free sidewalks.