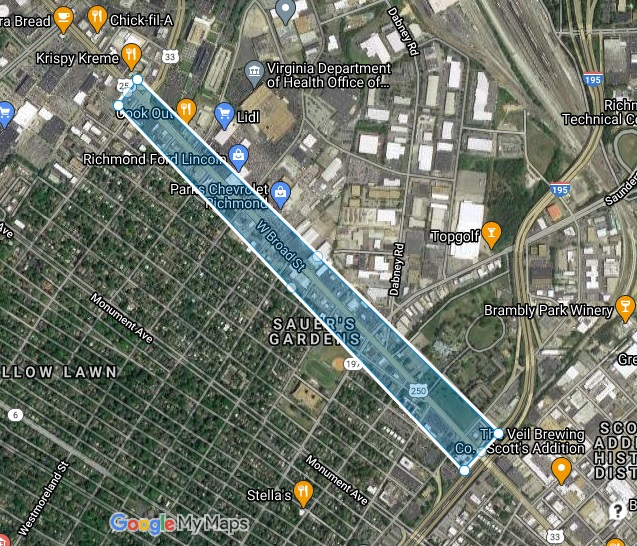 The rezoning to TOD-1 Transit-Oriented Nodal District would affect properties lining both sides of Broad Street between the expressway and Staples Mill Road. (Courtesy of Google Maps)

The Richmond City Council meets from 1 to 3 p.m. Monday for its first work session on the proposed budget for fiscal year 2022. The budget proposal can be viewed here.

The council meets in regular session at 6 p.m. Monday. Business on the agenda includes a resolution co-patroned by Andreas Addison and Ellen Robertson to declare a public necessity to rezone city properties along Broad Street west of Interstate 195 from B-3 General Business District to TOD-1 Transit-Oriented Nodal District. The change would allow for denser development in accordance with the city’s Pulse Corridor Plan. Full agenda available here.

The next virtual community meeting on resort casino proposals in Richmond is scheduled at 6 p.m. Tuesday. The meeting will be held via MS Teams and can be accessed via this link, or via telephone at 804-316-9457, phone conference ID: 934 627 185#.

The city received six proposals in response to its resort casino RFQ/P. Citizens are encouraged to share feedback in the meeting. More information about the process is available on the city’s website.

Henrico supervisors meet Tuesday starting at 6 p.m. The earlier start time is for a public hearing on the $1.4 billion budget proposed for fiscal year 2022, and for allocation of car tax relief for tax year 2021.

Business on the agenda includes introduction of an ordinance to approve cooperative marketing of the WynnBET sports betting platform at Richmond Raceway. Marketing activities would include signage and displays to advertise the platform, which the NASCAR-authorized gaming operator launched in Virginia in conjunction with being awarded an online sports betting permit in the state.

The Chesterfield County Board of Supervisors will meet Wednesday. Full agenda here.

On the agenda is a public hearing on the county’s proposed fiscal year 2022 budget. The budget’s proposed $806.8 million general fund would allocate $344.7 million in local funding to the school district, as well as $226.8 million in capital improvements. The general fund is an 11.7 percent increase compared to the adopted FY21 budget.

The budget can be viewed here. Adoption is anticipated April 7.

The Hanover County Planning Commission voted Thursday to defer a decision on whether to recommend a request by George and Kay Fearnow to rezone about 16 acres on the east side of Shady Grove Road south of its intersection with Tipping House Drive to tee up 49 age-restricted townhomes. Consideration of the request is now expected at the commission’s April 15 meeting.

Commissioners similarly deferred another rezoning request filed by Edward and Carolyn Tyler for a 49-unit, age-restricted townhome development on roughly 8 acres on the east line of Shady Grove Road near its intersection with Shady Knoll Lane. That application is also expected to be considered April 15.

The commission recommended denial of a proposal by a group including Roxanne and Lazaro Perdomo to rezone about 36 acres for 64 single-family home lots north of Old Keeton Road at its intersection with Washington Highway in the South Anna District, and to rezone 4 acres to M-2 light industrial with conditions for speculative commercial and light industrial uses. The application now heads to the Board of Supervisors for a final verdict.

The City of Richmond needs to make everything from Board Street to the Railroad Yard all Todd in that a lot of that space is one story buildings and parking lots. The City of Richmond also needs to raise the buildings to at least 30 stories to take pressure off Richmond’s over heating housing market. It would be interesting if Richmond could lay the ground work to get a impressive skyline like several other fast growing cities. Also a 30 story building could take in 4 to 7 million in tax renvue a year in properity taxes.